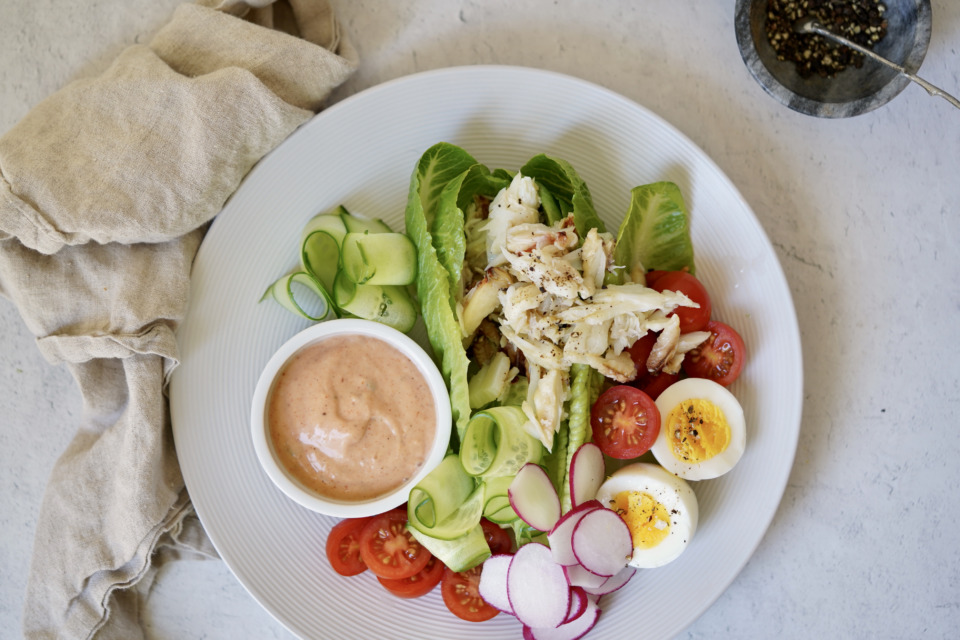 Crab Louie salad, (pronounced LOO-ey), known also as, “the king of salads“, is a well-known dish, most food historians agree, first began appearing on menus of finer West Coast restaurants, sometime between the turn of the 20th century and World War I. Dig a little deeper and you find the first printed recipe for the famous salad, including all the traditional ingredients, (lettuce, two hard boiled eggs and shredded crab meat), first appeared in the  Portland Council of Jewish Women’s Neighborhood Cookbook in 1912.  As a Jew, I actually find this tidbit fascinating, depending on how observant you are, eating crab is not typically common.

The salads origin originating on the the West Coast makes a ton of sense to me, because in the late 19th century, there was an abundance of fresh crab in the area. San Francisco, Seattle, Vancouver and Portland all served crab on menus dating back to the early 19th century. Looking further back, it was a man named Captain George Vancouver who named Dungeness Spit, in Washington, which was known for its abundance of fresh, sweet, tasty crab and reminded him of the Dungeness back in England.

When Vancouver and his expedition landed at Discovery Bay in 1792, they hauled in fish and crab for the crew. After that, Dungeness crab thrived from Northern California to Alaska, and quickly became a commercial hit. It was not until the early 20th century that crab began being served with lettuce and other veggies as a healthy option and crab Louis salad, as we know it, was born. 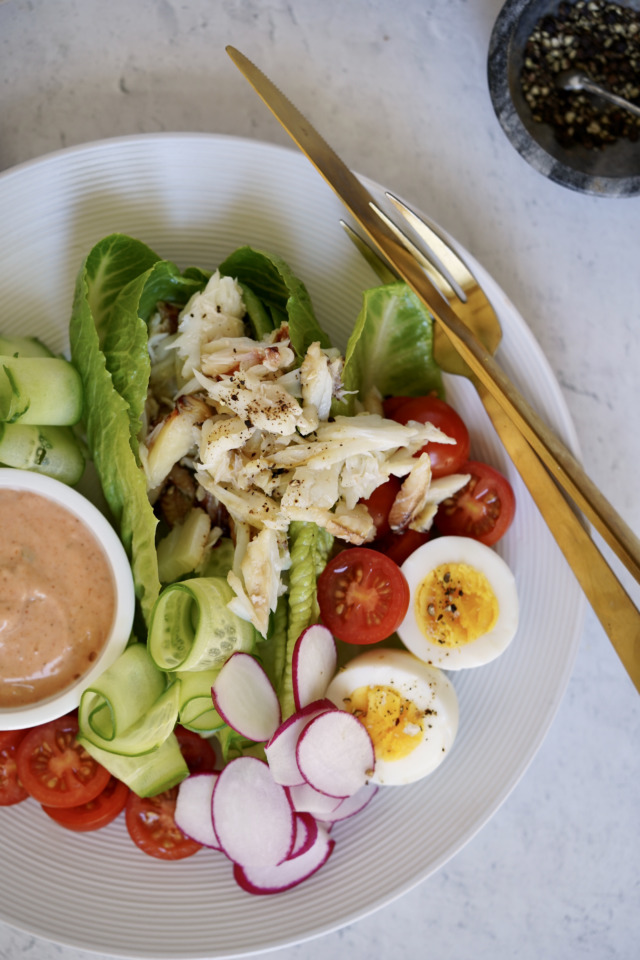 The origins of who Louis is, remains in dispute to this day. One version says is was named after the Italian tenor Enrico Caruso who traveled to Seattle in the early 1900’s, ate crab Louis salads at the Olympic Club and developed an insatiable appetite for it. Other historians suggest that the iconic salad was named after King Louis XIV, who was known for the enormous amounts of food he would eat.

A San Francisco restaurant, The French Poodle Dog, one of the first restaurants to serve the salad early on claimed to to have named the Louis dressing after its chef, Louis Coutard. But at the historic Davenport Hotel in Spokane, crab Louis first appeared on the menu the year the hotel opened in 1914 and claims the salad was named after the hotel’s owner, Llewellyn “Louis” Davenport.

Like the name itself, there is also a big debate about its dressing as well. Some Louis recipes call for part or all of the crab to be mixed with dressing before serving. While in other recipes, the greens are pre-dressed, or the dressing is exclusively served on the side. The truth is, anything goes, but most commonly you will see the dressing served in a small ramekin on the side.

Taste-wise, the Louie dressing itself is actually very similar to Thousand Island, but despite what many believe, it’s not the same, Louie dressing is less sweet and slightly more savory. Traditional Louis dressing ingredients will include both Worcestershire sauce and horseradish. Sometimes Louie and Thousand Island dressings are used interchangeable, but technically speaking, a crab Louie salad served, without its classic dressing, is technically considered incomplete. 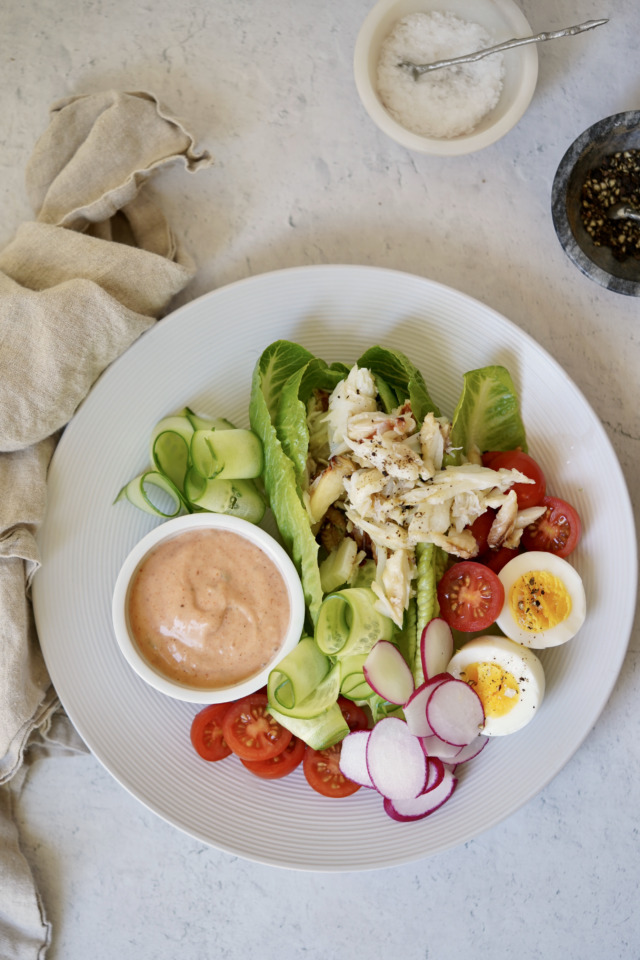 I’ve always been a huge salad fan, and whipping up a slightly modernized crab Louis salad, utilizing fresh summer vegetables and sweet, Dungeness crab has become a recent favorite thanks to my husband, who can’t pass up fresh Dungeness crab when he sees it. This simple, prep-ahead salad is a worthy addition to your summer meal repertoire. 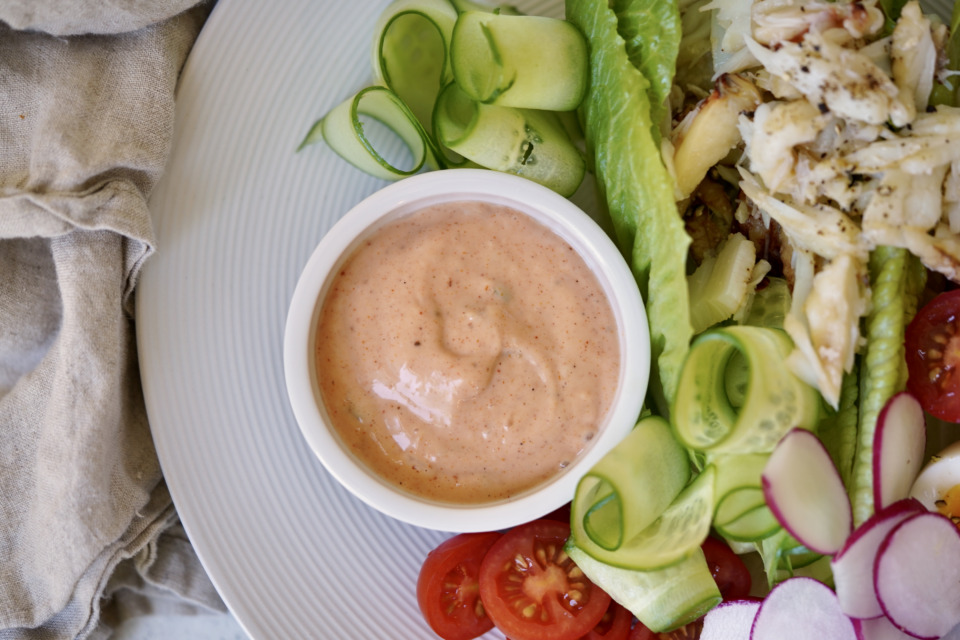 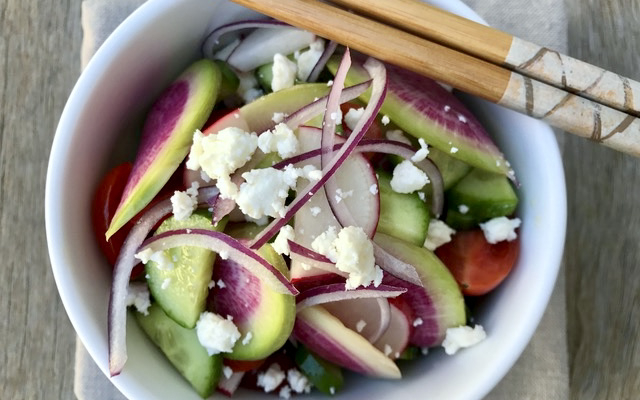 If you are unfamiliar, watermelon radishes are supremely beautiful. Their deep pink/magenta color is eye-catching and adds a real pop to any ordinary salad. Watermelon radishes are actually considered a heirloom Chinese Daikon radish and a member of the mustard family (along with arugula, broccoli and turnips–who knew!). […] 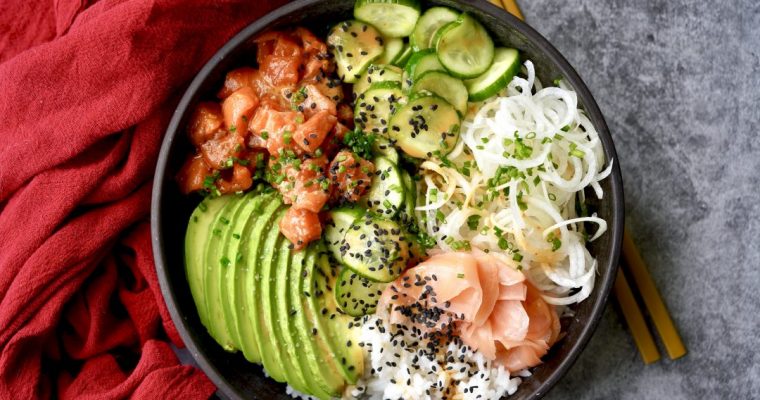 This is my spicy salmon roll sushi bowl and one I’ve loved for some time, but am just getting around to sharing it. Truthfully speaking, there is nothing all that complicated about this dish, but it’s the perfect one-bowl meal that’s easy to make and […]