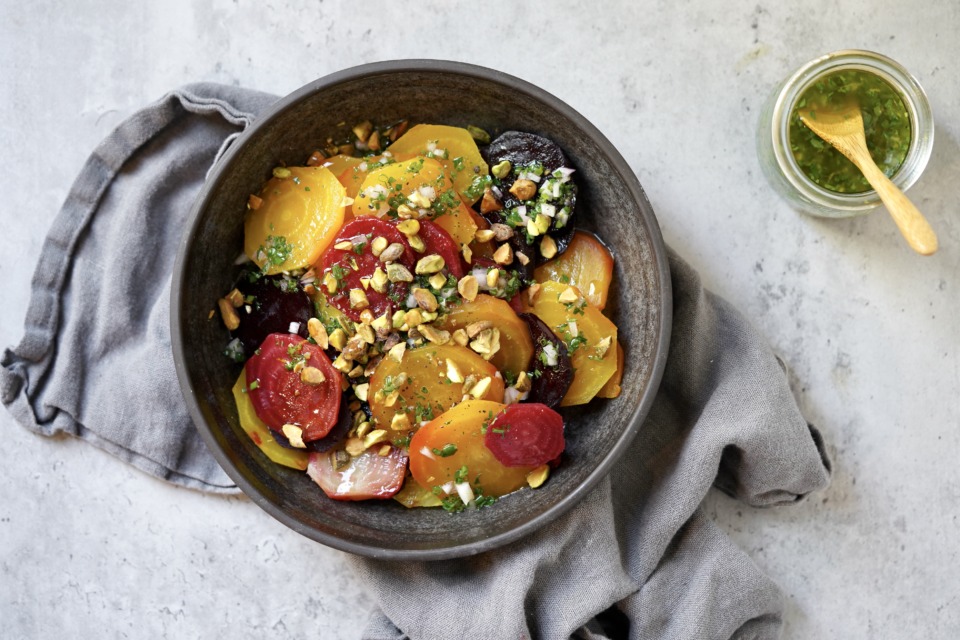 Beets are a winter essential, loaded with nutrition and low in calorie as well. Some say, this prominent vegetable may just hold the secret for keeping healthy in cooler months.  This simple roasted beet salad with pistachios, dressed with a punchy orange vinaigrette is a wonderful way to incorporate beets into your diet going forward.

Beets (also called beetroot, table beet, garden beet, red or golden beet) are the taproot part of the beet plant. Like Brussels sprouts, beets are a complicated vegetable. Classification-wise beets fall into the root vegetable category. Typically deep red or purple in color, beets are available in various countries, throughout the winter season. Preparation-wise, beets are versatile, and can be roasted, boiled and even shredded and eaten raw.  In terms of taste, beets are mild enough to not overpower other ingredients, but also have the ability to shine, as is the case with another favorite of mine, beet hummus. Although the green leafy part of beetroot is also edible, (and wonderful in pasta dishes) its the tuberous part that is consumed more widely. 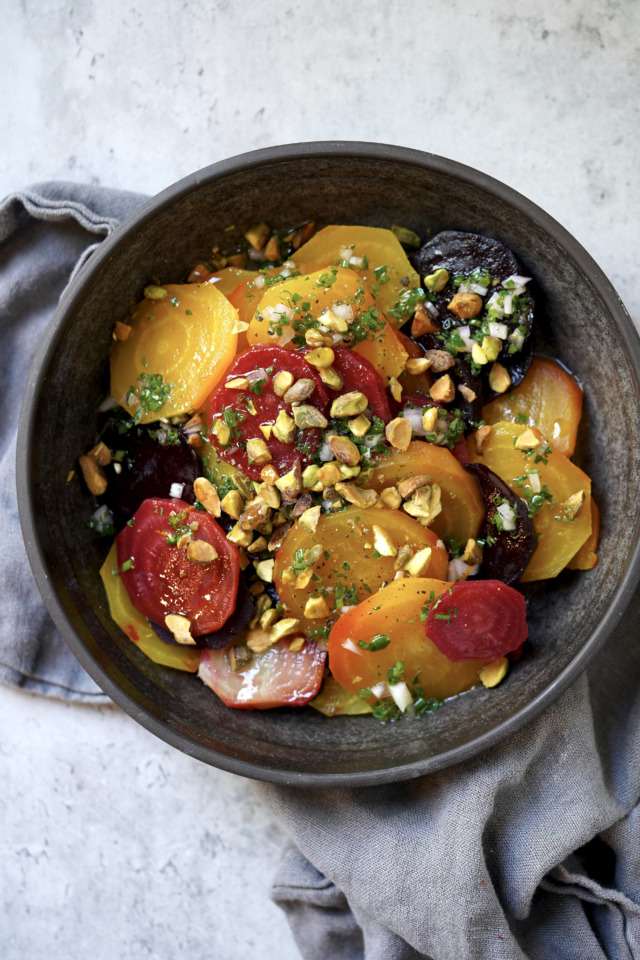 Beets have been around a long time, many believe as early as the Third Dynasty (third millennium BC). But in ancient times, beets were mainly used for medicinal reasons, or offering to the gods in addition to consumption. Apicius, a famous Roman gourmet, wrote a book called “The Art of Cooking” and in it gave recipes with beetroots, like broths, and salads with mustard, oil, and vinegar.

All of these uses were for an older variant of beetroot, one that was long and thin, more similar to a carrot. Modern beets, as we know them today, did not appear in Europe till the 16th and 17th century. It actually took a few hundred years more for beets to gain popularity in Central and Eastern Europe where new cuisines with beetroot started appearing (borscht for example). 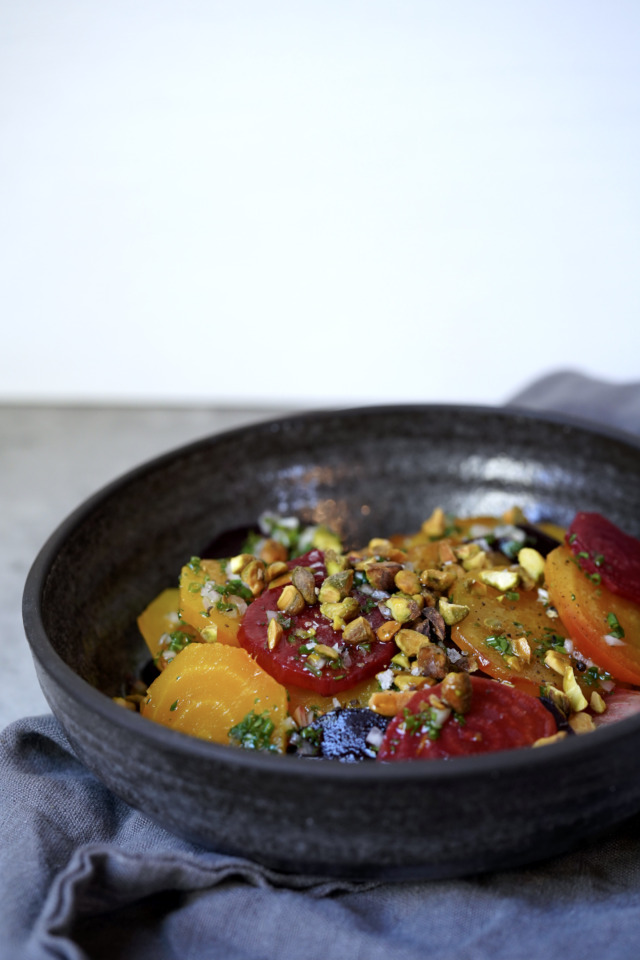 In Victorian times, beetroot was used to bring color to diets and as a way to sweeten desserts. It was industrialization that allowed for easier preparation and conservation of vegetables, so beetroot eventually became more available. After the Second World War, because of the rations, pickled red beetroot was the norm. Today, the most common variant of beetroot is round and deep red, but beets can also be yellow, white, and even red and white striped. 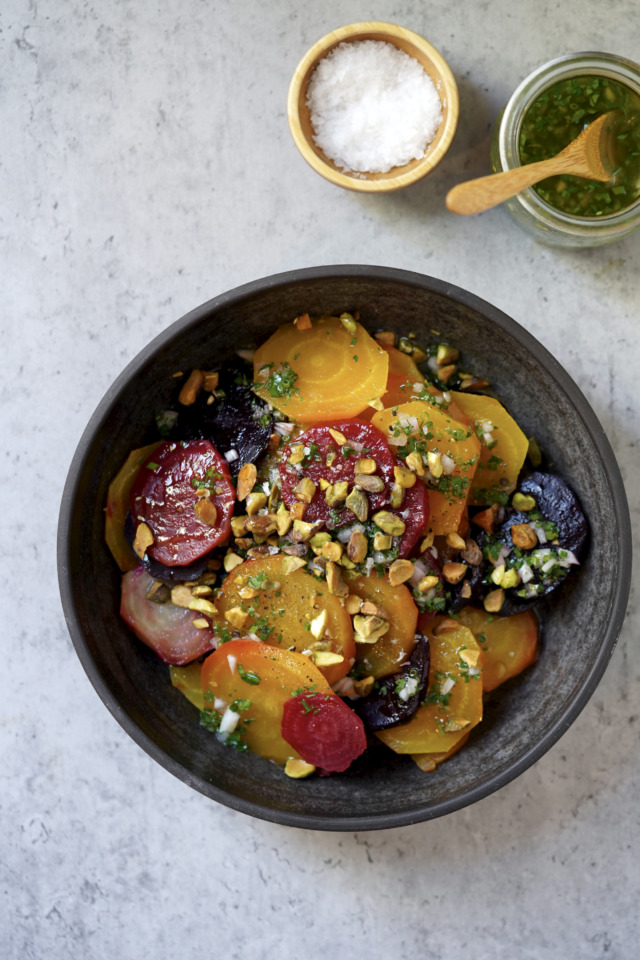 Beets have an impressive nutritional profile overall, they are low in calories, yet high in valuable vitamins and minerals. In fact, they contain a little bit of almost all of the vitamins and minerals your body needs. I think that’s rather impressive. Beets are particularly rich in folate, a vitamin, which helps with heart health. They also contain a good amount of manganese and copper, which helps with energy production. Beets also have a high amount of vitamin C, nature’s immunity booster, making this root vegetable a winter essential. 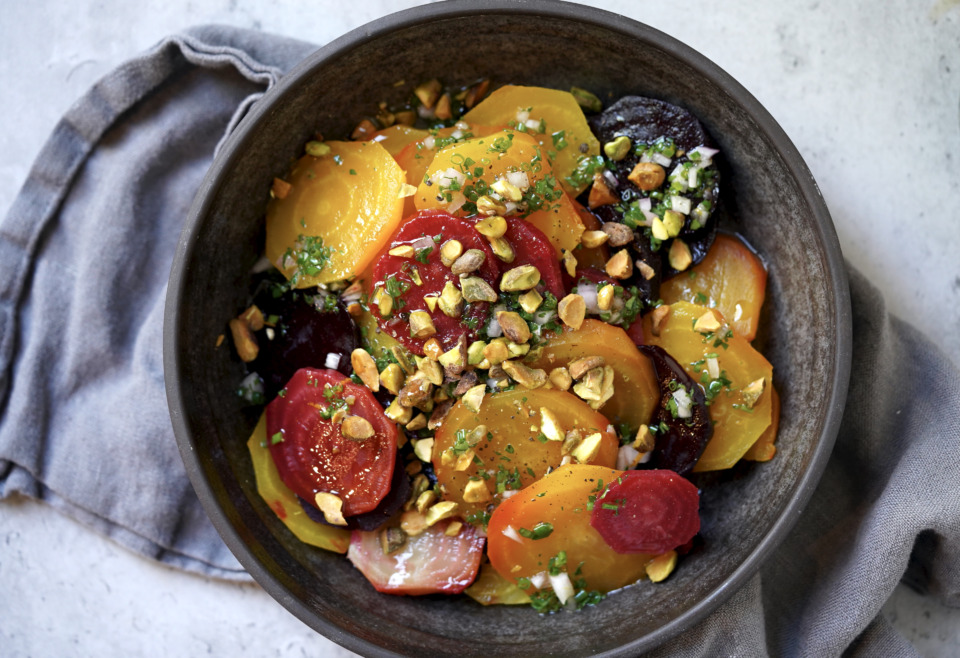 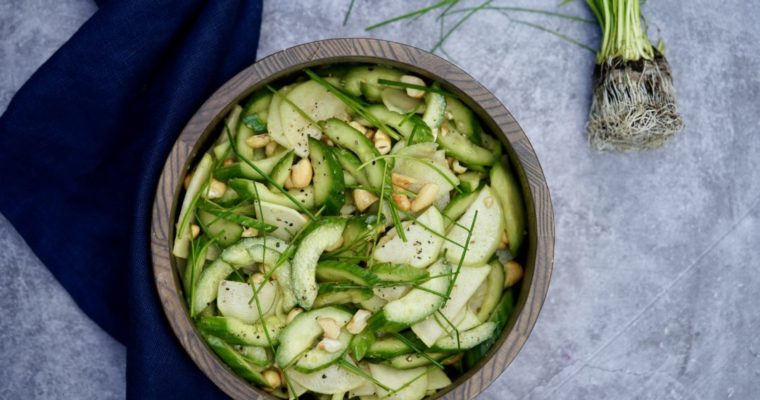 I’m still obsessed with Din Tai Fung’s cucumber salad, but this cucumber and kohlrabi salad is a new favorite. Simple, healthy, flavorful and best part, effortless. There is nothing all that fancy about this salad, but kohlrabi, a much less talked about vegetable, with its […] 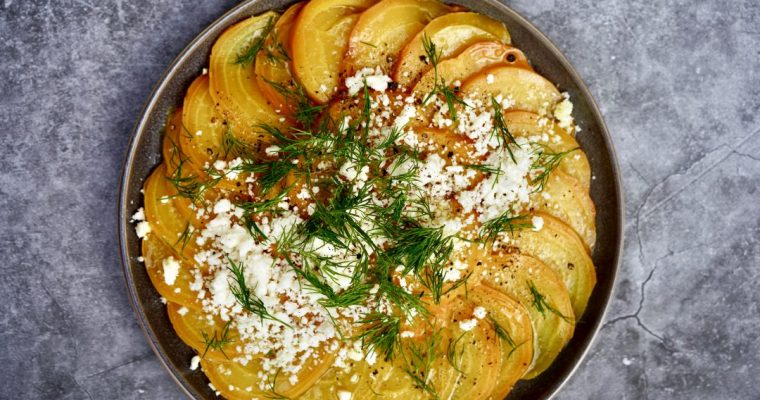 Golden beet carpaccio has been a favorite dish of mine this summer. To be honest, I’ve always been fond of beets and this dish merely reflects my love of this simple, yet  incredibly flavorful, vegetable. Beetroot is the taproot portion of a beet plant. In Canada and […]