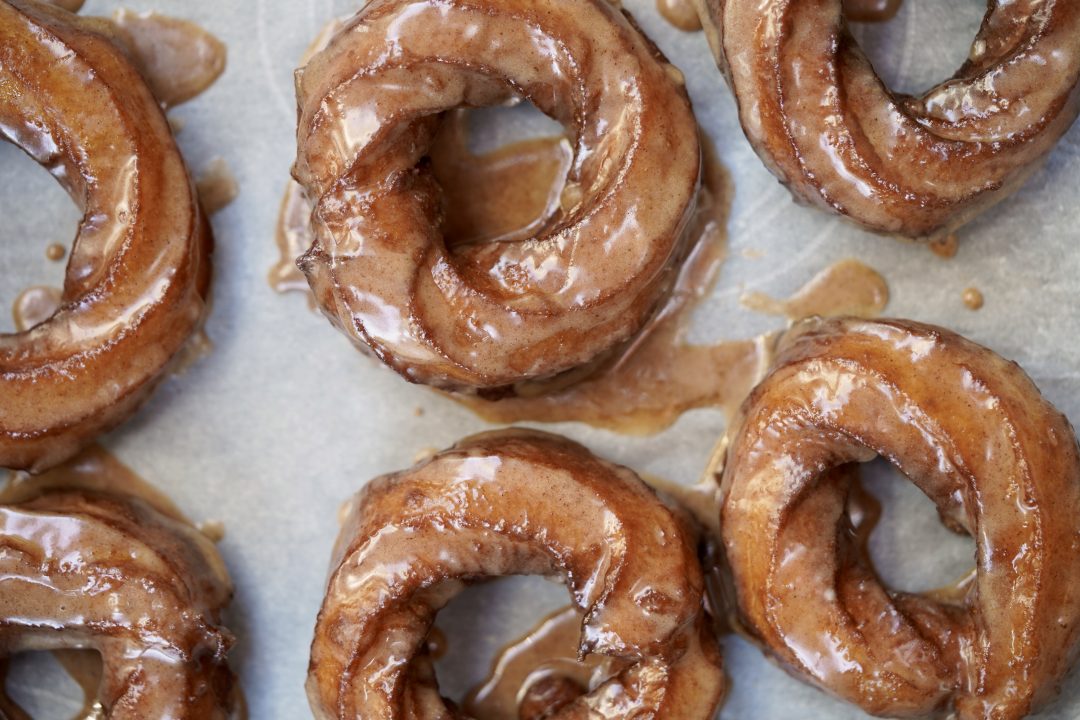 I love Fall. And with the exception of the holiday decorations coming out at way too fast of a clip, I enjoy all aspects of it. But personally, I think the pumpkin craziness gets a bit more glory than it deserves. Don’t get me wrong, I love a great pumpkin cookie, pumpkin muffins are my new go-to, pumpkin cheesecake is a yearly treat I look forward and pumpkin brownies can not be made often enough in my house. But, that said, all things apple should get equal, if not more, amounts of praise. 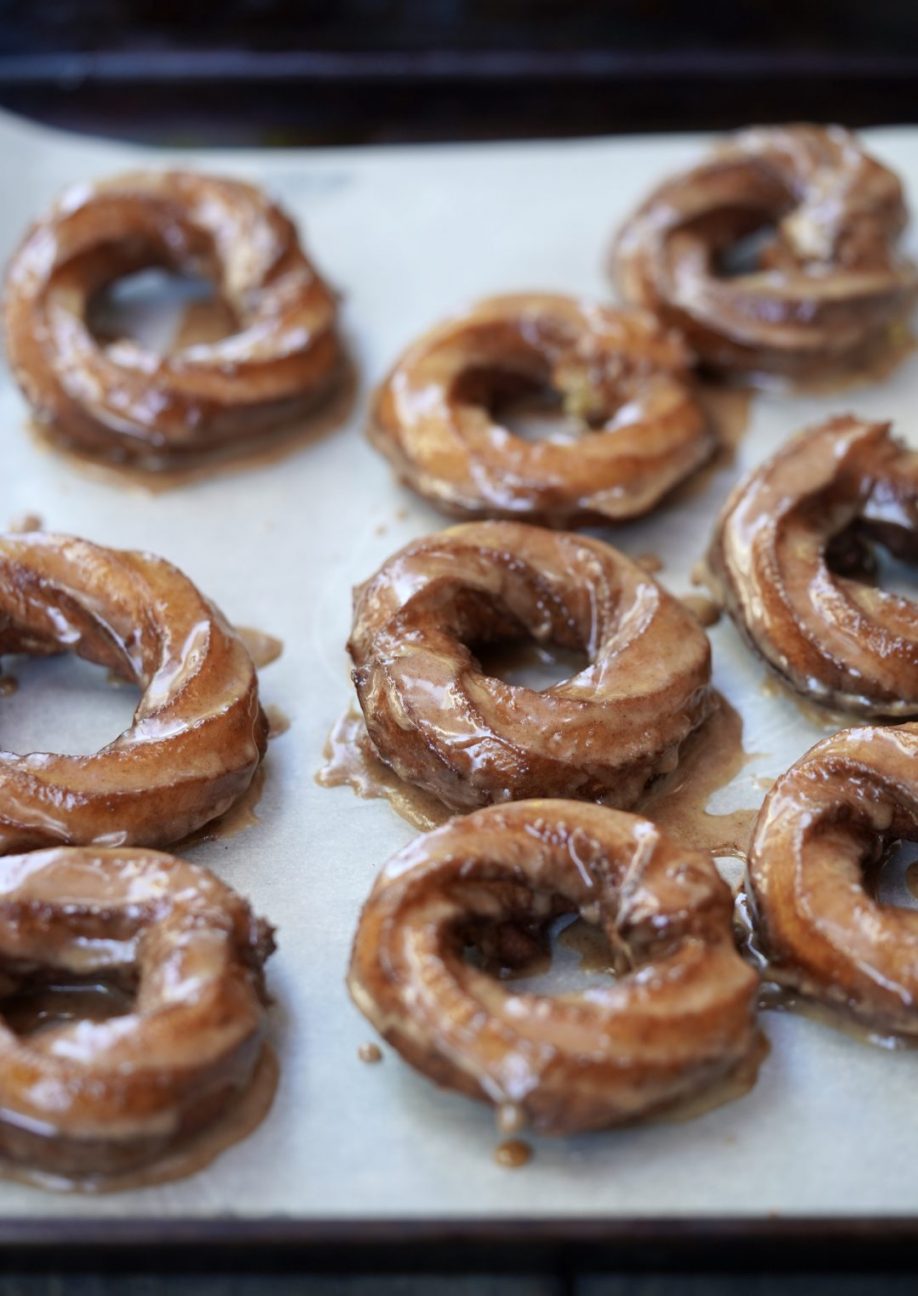 These are my homemade apple cider crullers with cinnamon glaze and they are completely addictive. Apples are a worthy fall fruit and I thoroughly enjoy baking with them. Apple tarte tatin has been a favorite go mine forever, apple strudel is a breakfast treat I could live on, apple butter is something I can eat with just a spoon and I’ll never say no to a Fallen Apple cocktail, even on a Tuesday. So let’s just set the record straight and say that autumn apples are just as wonderful as pumpkins. 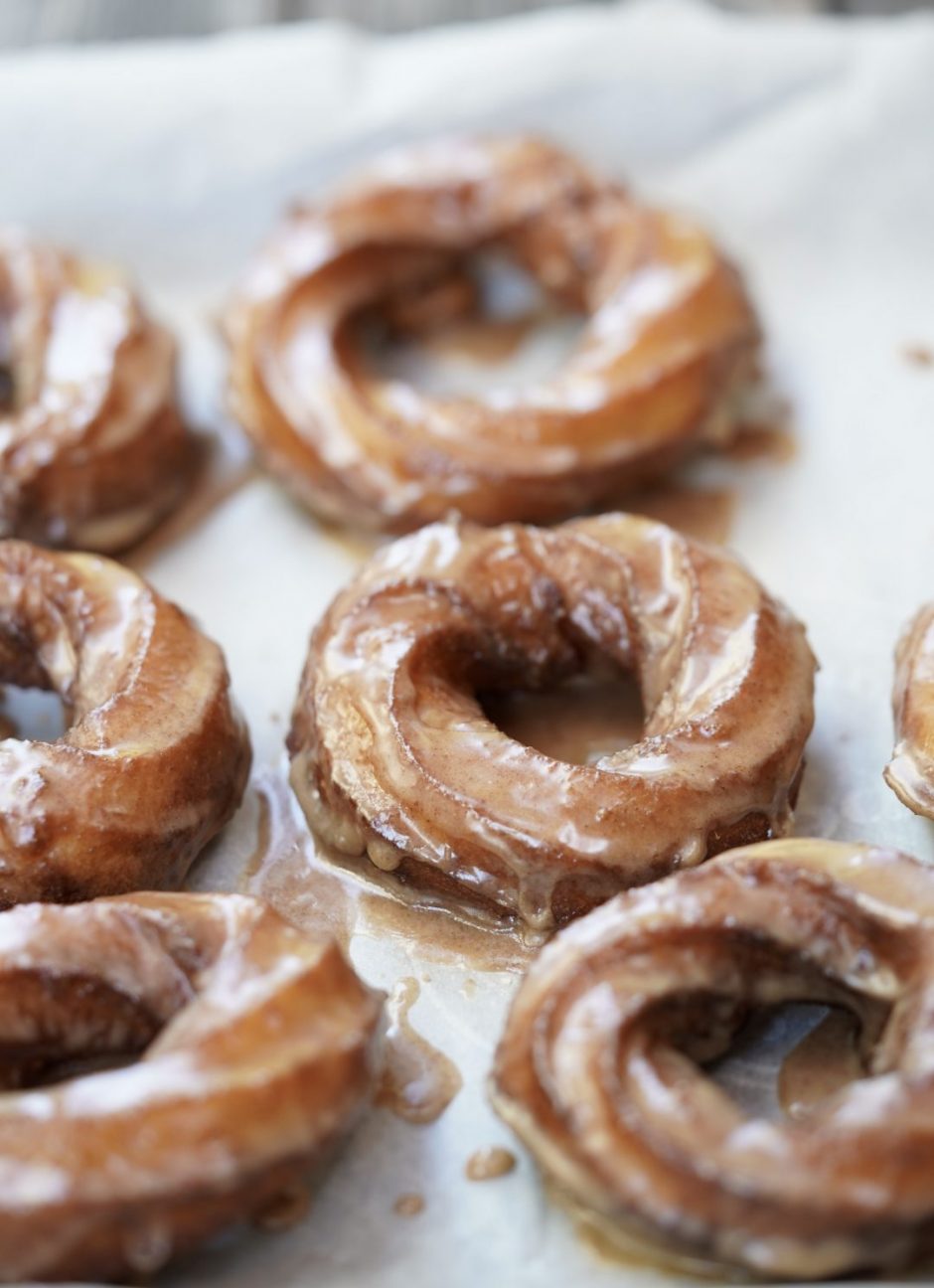 I have blogged about my love of donuts before as they are a tradition in my house on anyones birthday but also on Hanukkah. When it comes to the donut world, I am select, and you know it as well as I do, all donuts are not equal. To eat them means they need to be worthy. These apple cider crullers are in fact just that, they are also addictive. Some donuts are baked and some, like these crullers, are fried. Donuts can be filled or unfilled, glazed, dusted in sugar or frosted. All methods and variations are completely acceptable, it really just depends on what you’re in the mood for. 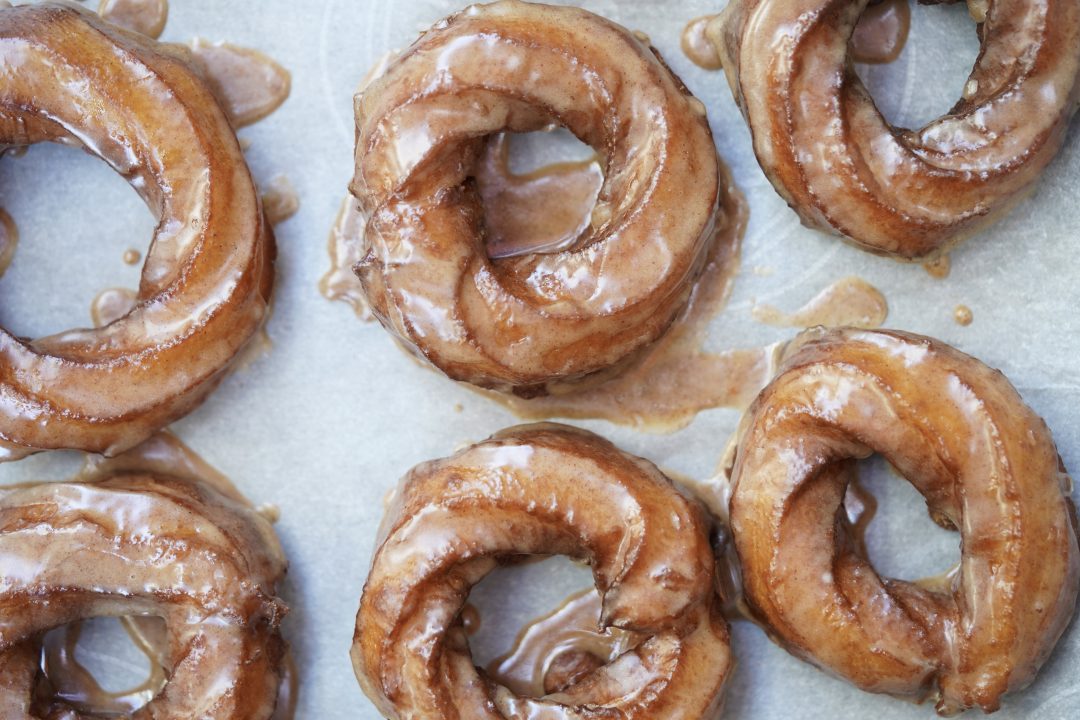 Until the early 1800s, homemade donuts (also written “doughnuts”) were yeast-risen and time-consuming to produce. Around the 1830’s chemical learners like pearlash, (a precursor to baking powder), became widely available and those quicker, chemically-raised cake donuts showed up in grocery stores across America. And by the early 1900s, donuts were a common snack across the country. World Wars I and II helped cement the donut as a “wholesome American creation“. And both the Salvation Army and Red Cross served donuts to the front lines. Apparently the servicewomen who served soldiers these sweet treats were known as “Donut Dollies“. After World War II ended, it was actually veterans who began opening some of the first donuts shops in the states. The American donut quickly went onto become known as a working-class breakfast and afternoon snack 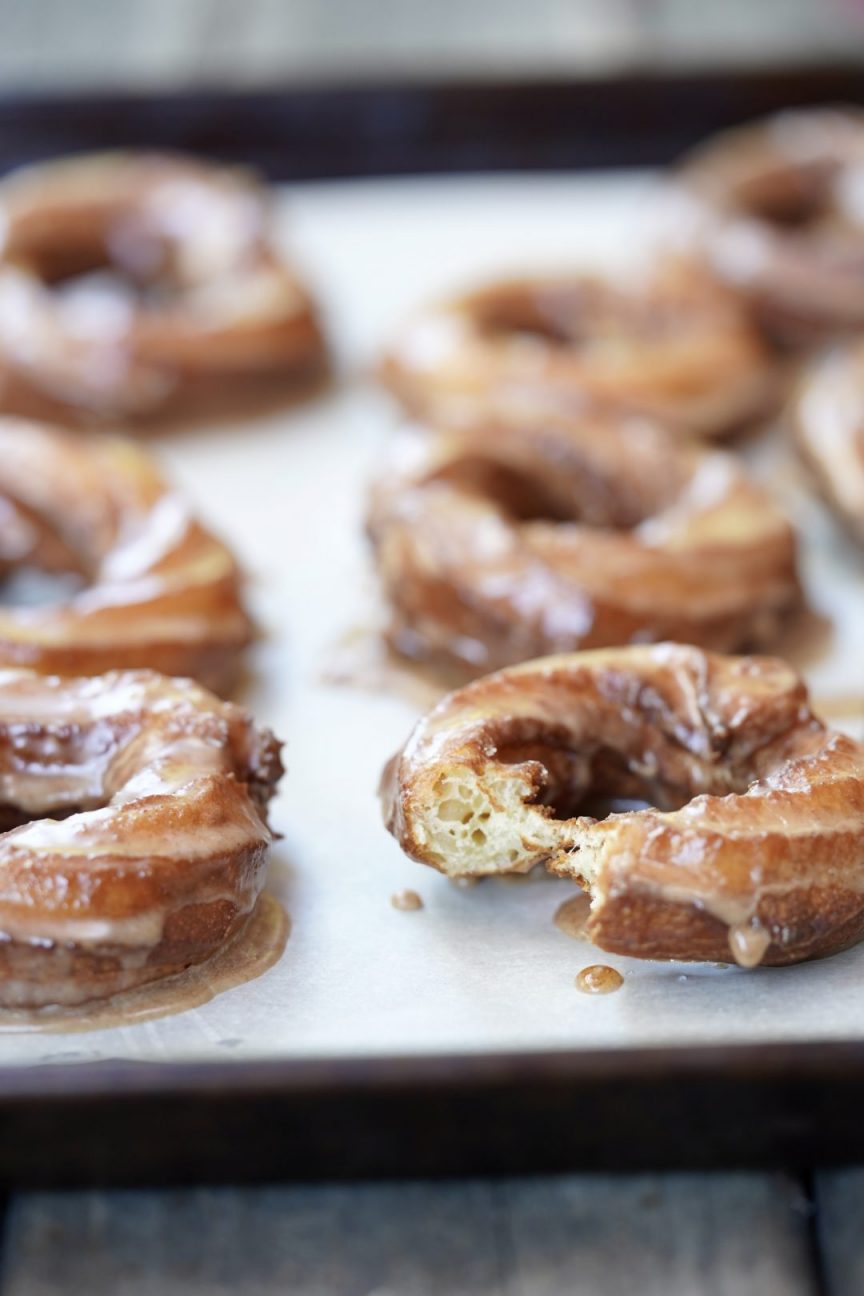 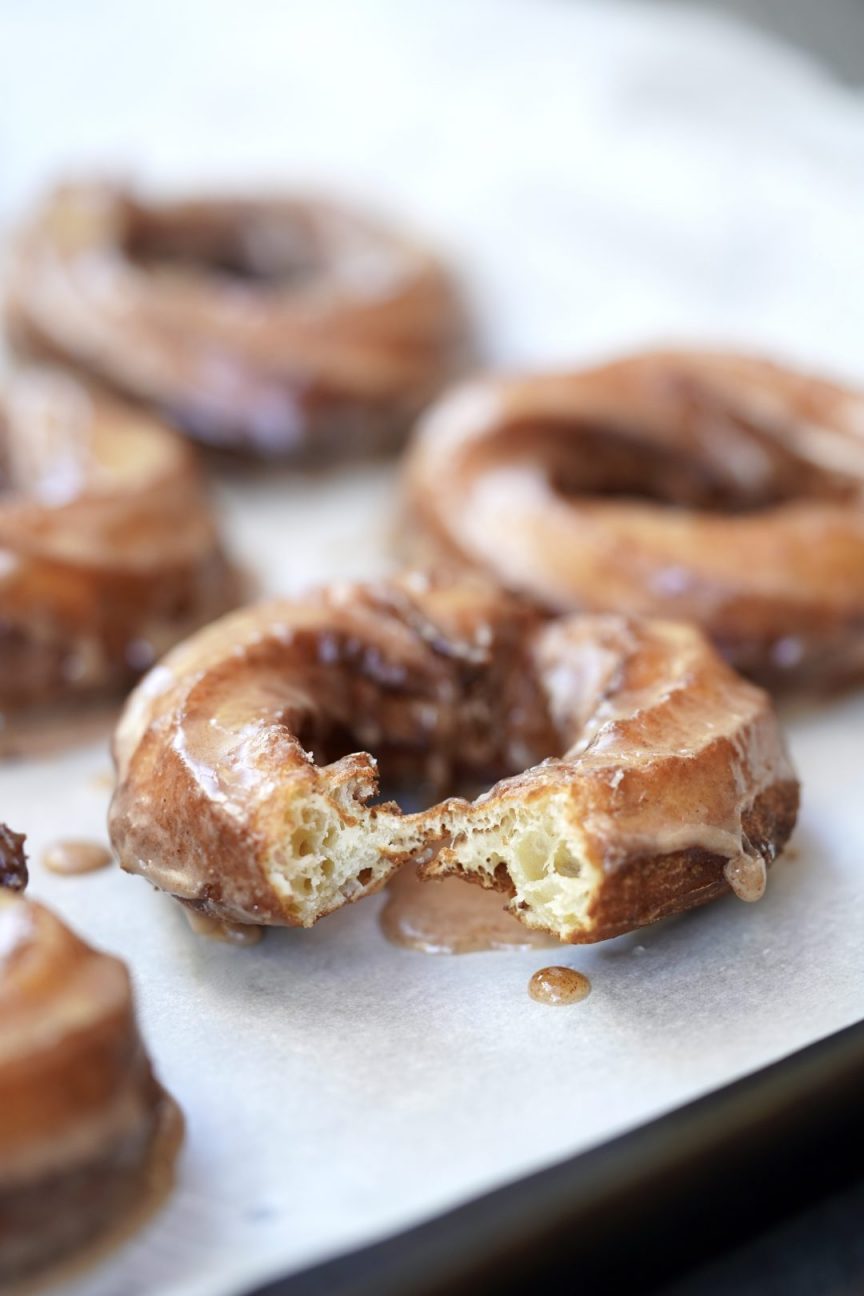 As a kid, my dad would go get a big box of assorted donuts for breakfast Sunday morning when my sister and I visited. Even then I was not a huge breakfast person, but I loved donut morning. These apple cider crullers aren’t your traditional cruller, they are more a hybrid of a cruller and a cake donut, since those are my favorite type of donuts. You pipe these crullers was a pasty bag and fry them just a few minutes in oil to obtain that soft inside and crispy exterior. Topped with cinnamon glaze these donuts get my two teenage boys out of bed quickly when I make them and I think that right there says a lot! 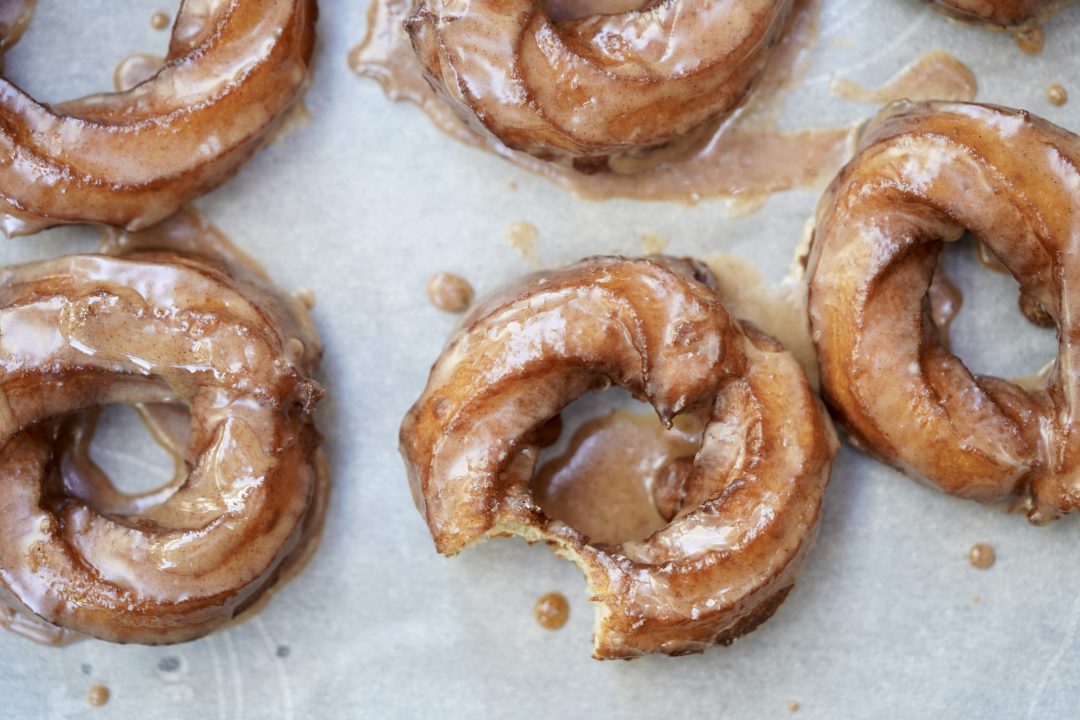