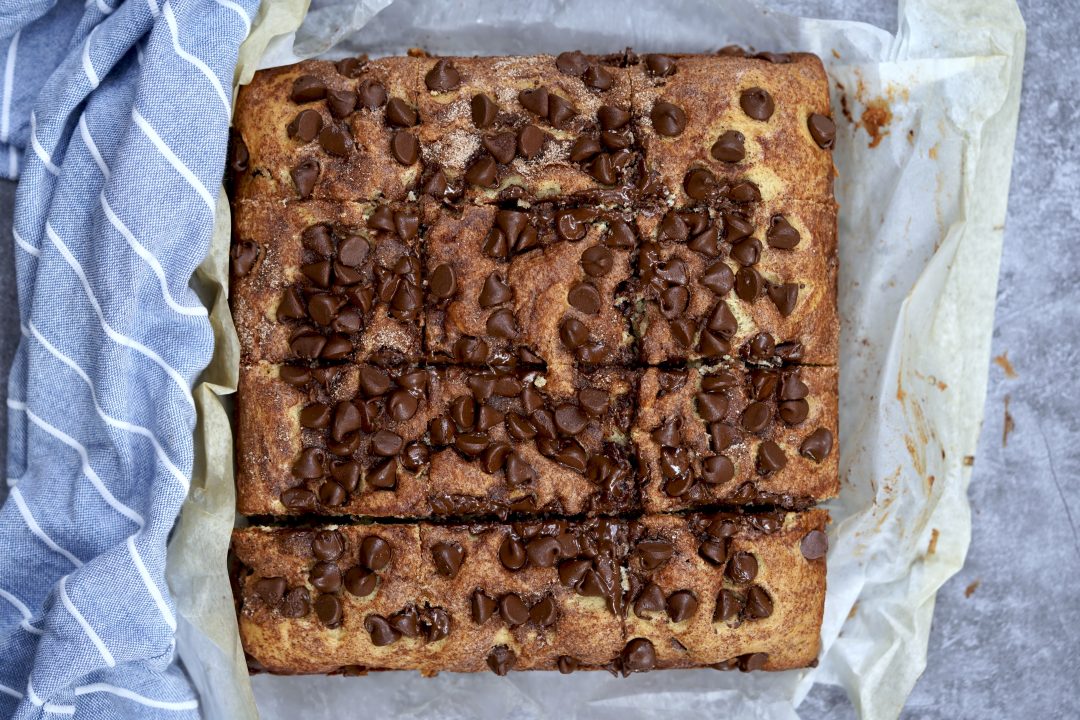 Calling it like it is, no one can ever have enough coffee cake recipes. And to be honest, I’m a sucker for banana bread as well, so this chocolate chip banana coffee cake blends two things I adore, in one. Total winner. If you ask my husband (who’s not typically a banana fan), this (like pie) is the perfect breakfast food. With a cake-like texture, abundance of chocolate chips and crispy cinnamon-sugar topping, it’s almost like having dessert in the morning. And to me, this is not a bad thing, especially these days. 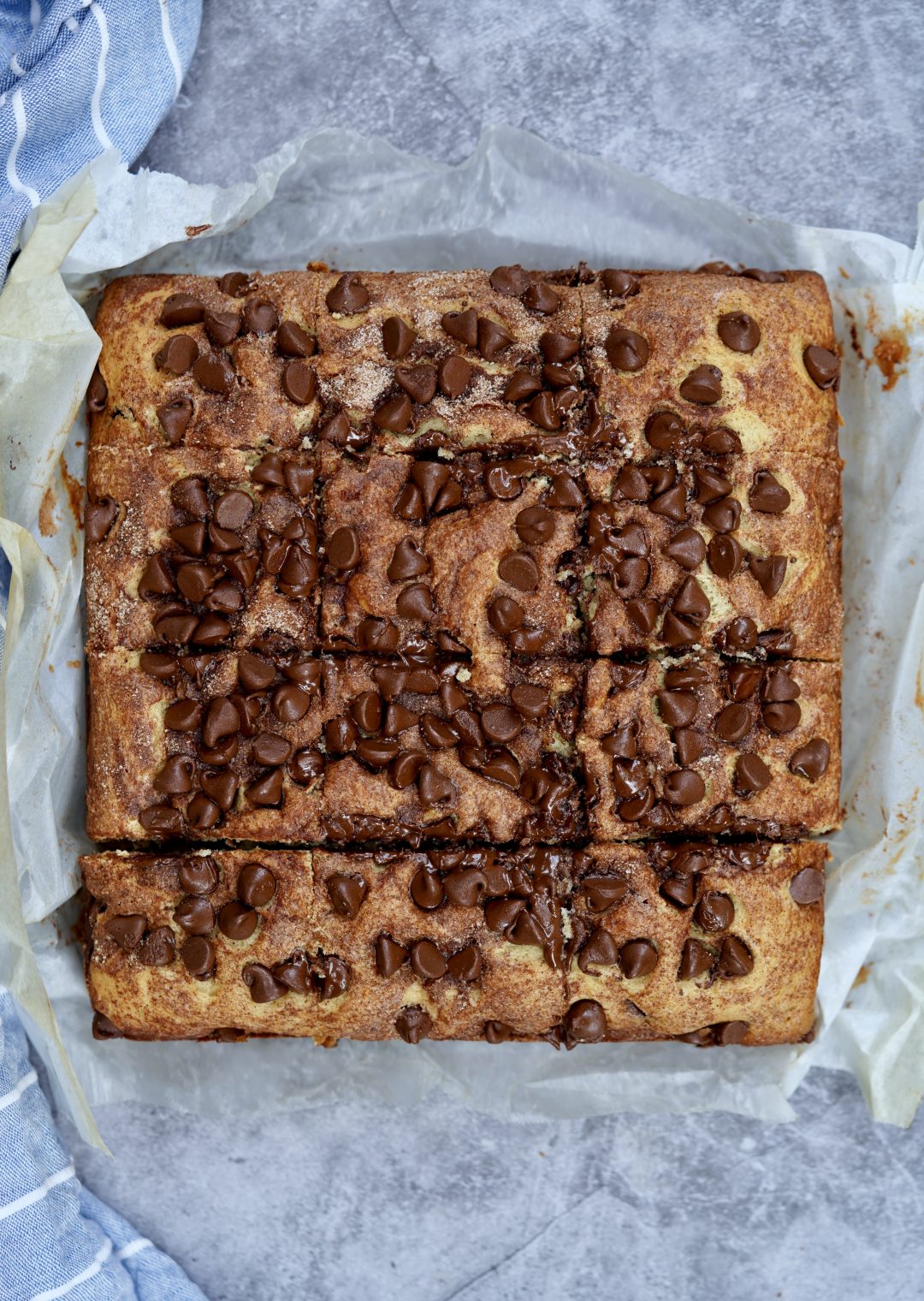 Since I was a kid I’ve always loved coffee cakes. But I’ve always been curious about their origin. Coffee cake evolved from other types of sweet dishes from Vienna. But truthfully, these cakes were more like sweet breads than actual cakes. Around the 17th century, Northern/Central Europeans began eating sweet cakes while drinking coffee. It was immigrants from countries such as Germany and Scandinavia who tweaked these recipes making them more cake-like and eventually brought them to America. According to the book Listening to America, Stuart Berg Flexner, it wasn’t until 1879 that the term “coffee cake” actually became a common term. 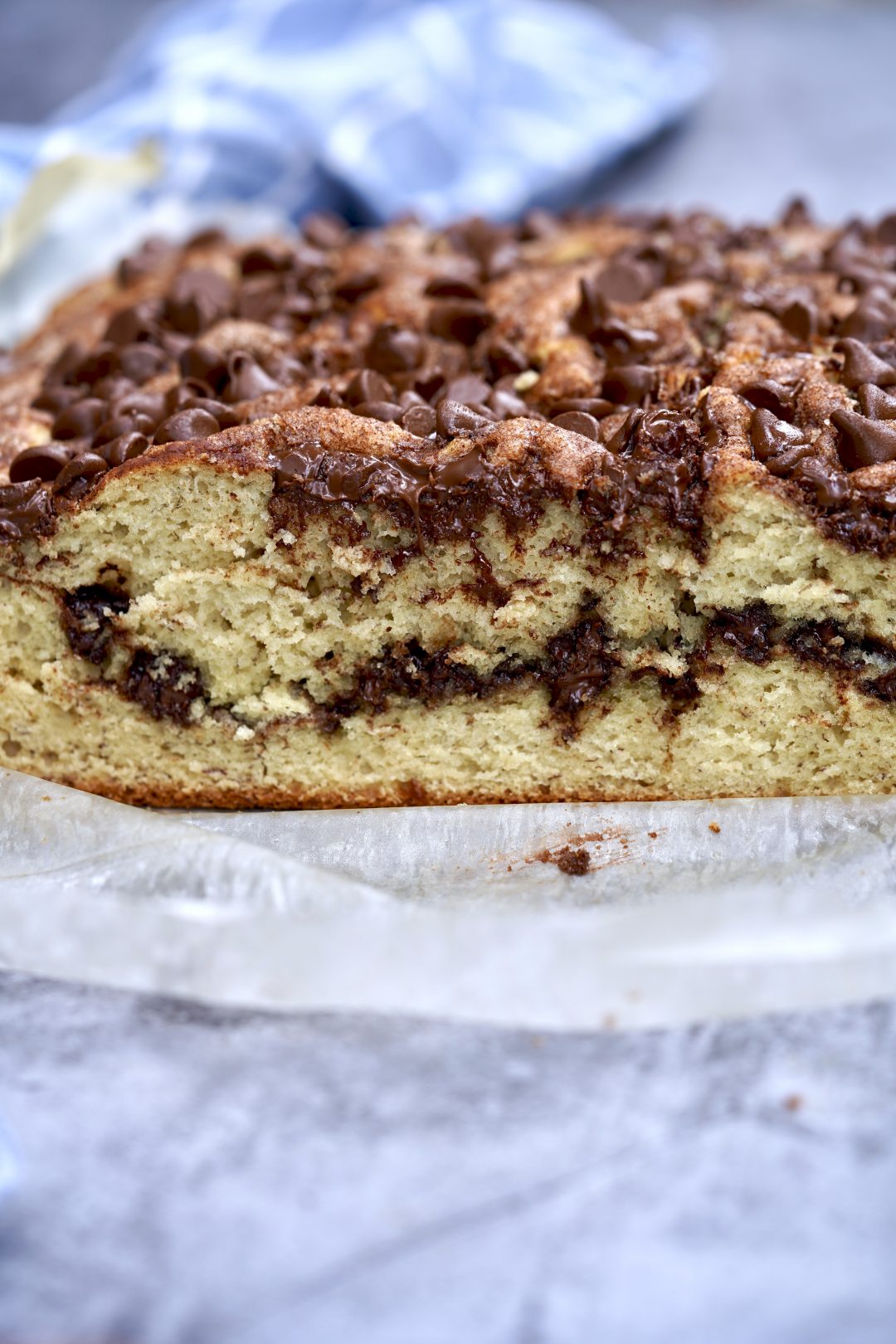 Coffee cakes stand apart from other cakes because of their streusel topping and because, although they sometimes have a glaze drizzled on top, but they are never frosted. Some have a swirl of streusel in them, and others are filled with fruit, nuts or chocolate. A coffee cake may, at times, actually have coffee in it, but the name comes from the fact that it is served with coffee, not because it has been made with it. 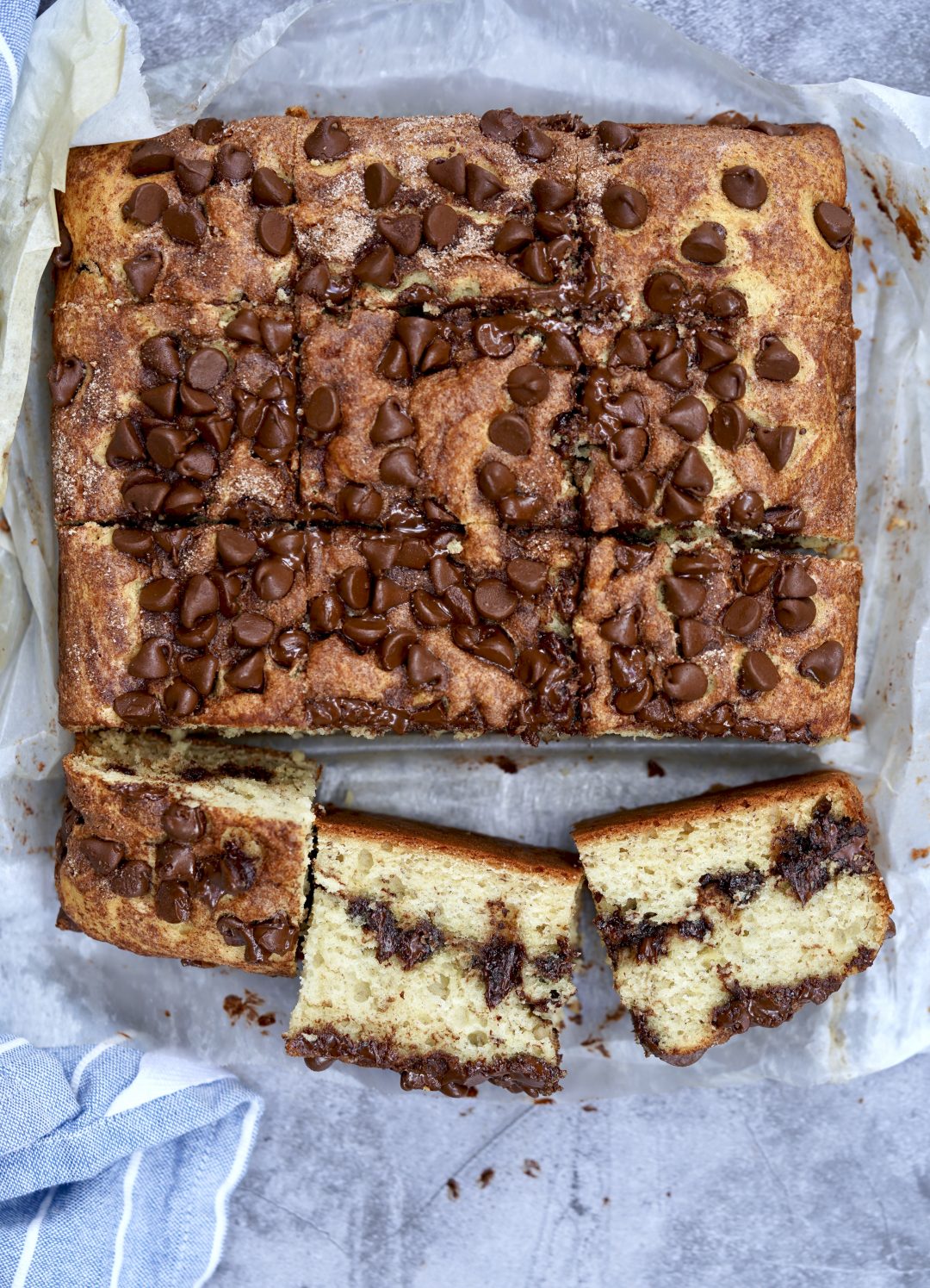 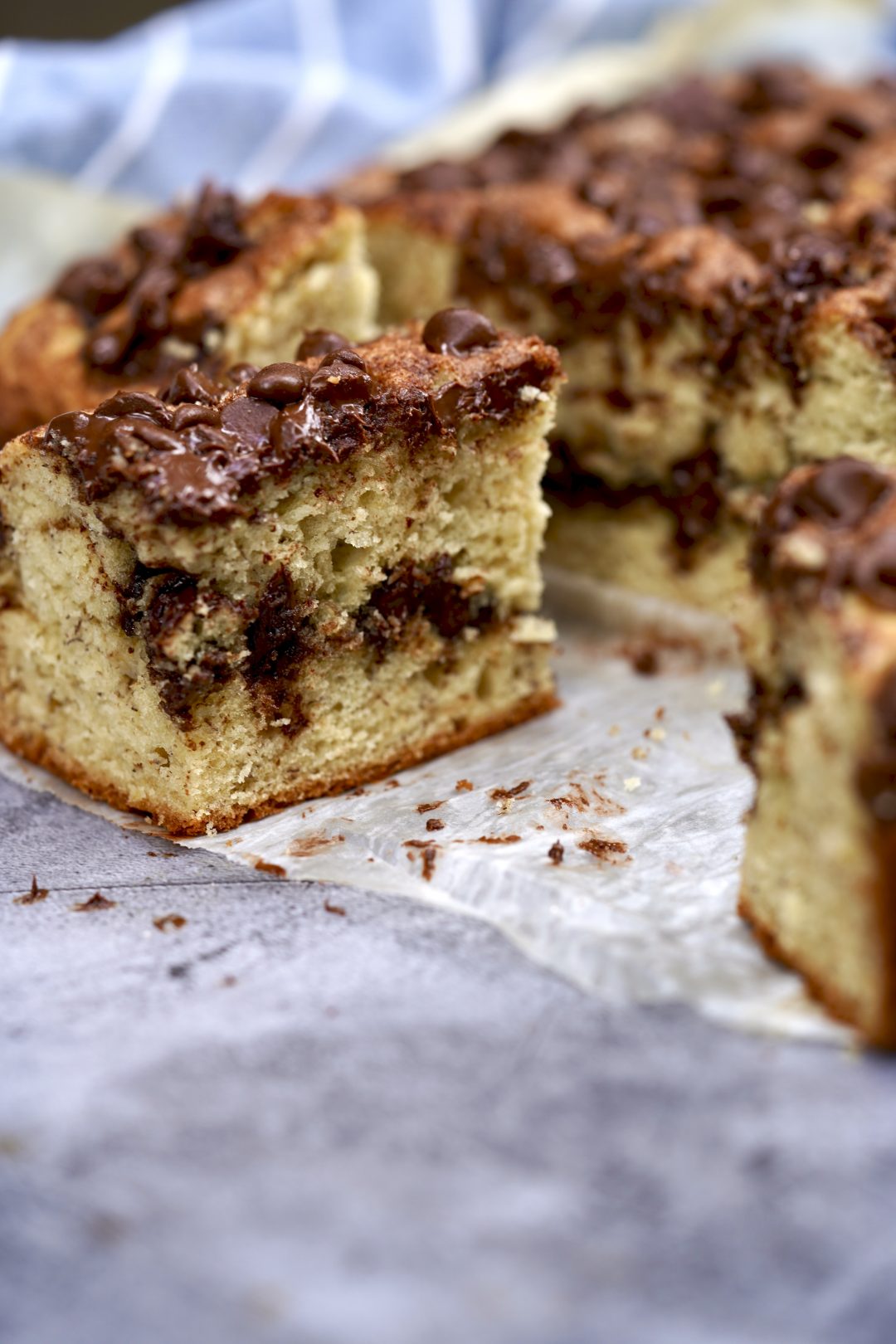 This chocolate chip banana coffee cake has a subtle banana flavor that is unassuming. In this recipe the banana helps with moisture making it anything but dry. Even those who may not gravitate toward bananas, will fall in love with this simple yet irresistible, breakfast cake. The cinnamon-sugar topping when baked creates lovely, delicate crispy layer on top and replaces the need for a traditional coffee cake streusel topping. I skip the bundt pan and keep this recipe simple and straightforward which pays off in the prep department. This effortless coffee cake is easy to whip up in under an hour and makes it a go-to for me any day of the week but may come in handy as kiddos head back to school (and by that I mean at home) this week. 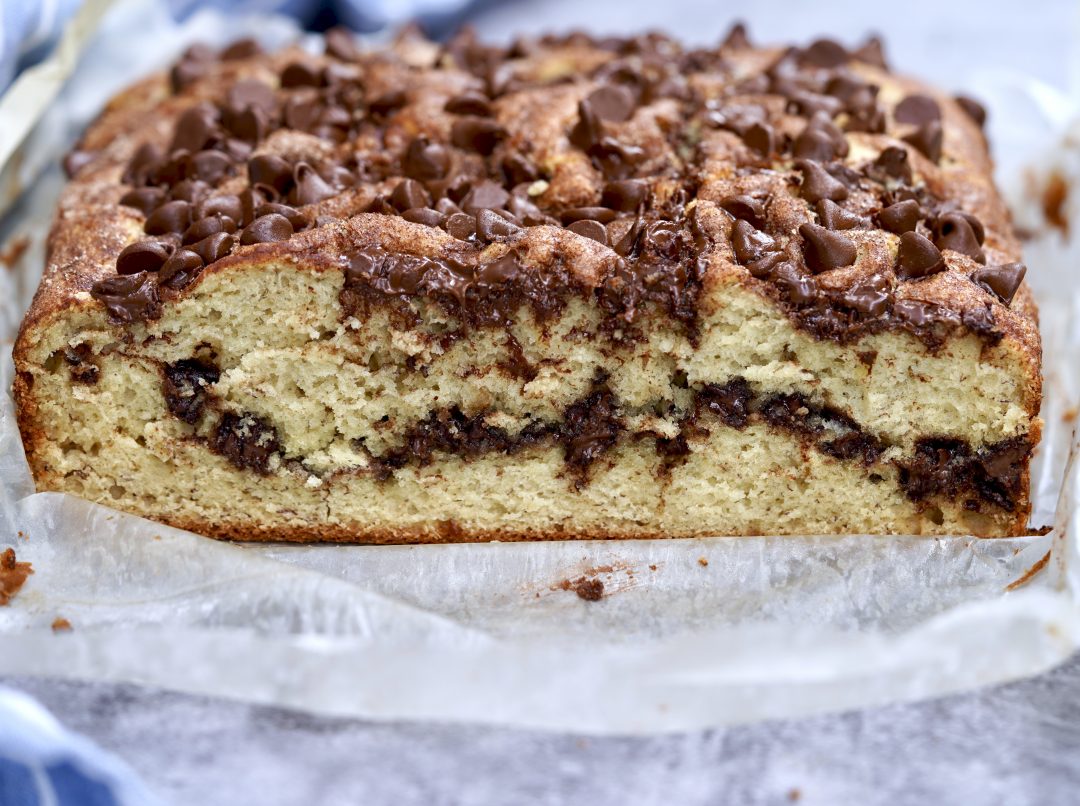