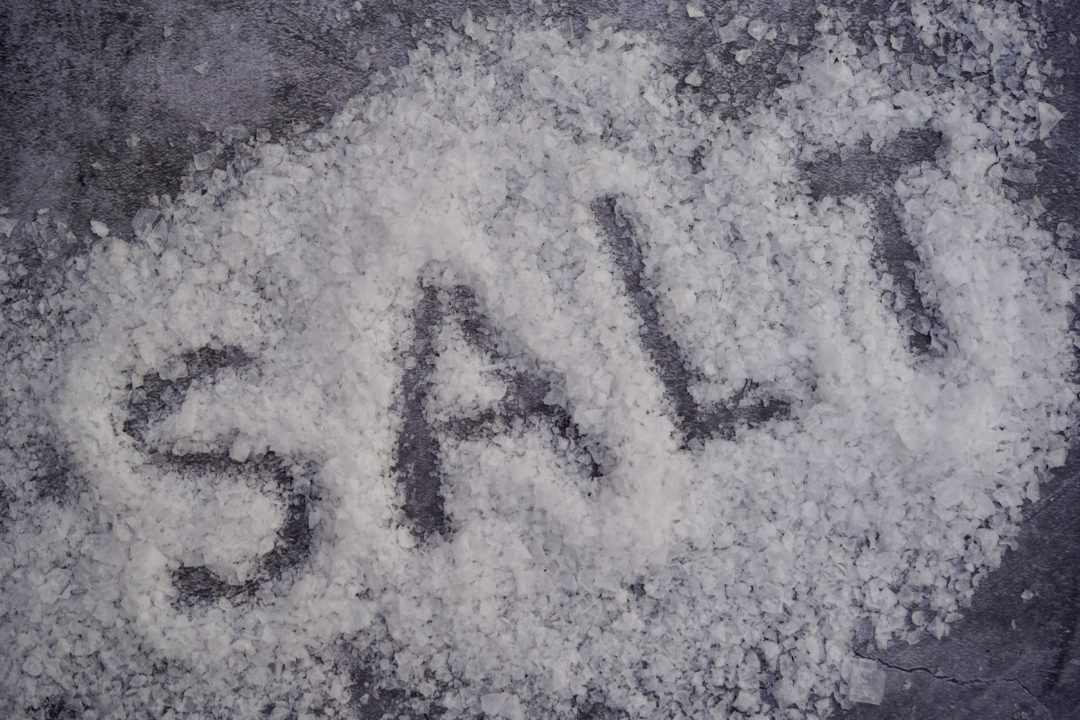 Salt is essential for life and saltiness is one of the basic human tastes. Such a vast topic, one can even find entire books dedicated to this very subject. One of the most well-know books being, “Salt, A World History,” by Mark Kurlansky, a fascinating read actually, should you be interested.

I am a salt fanatic. Salt, you learn in culinary school, can make or break your dish. Most people who cook under salt by a lot.   You spend a tremendous amount of time in culinary school perfecting your seasoning. It seems easy, but it is not. It takes practice to “season to taste” appropriately, especially when serving others–I learned this the hard way.

When I first began professionally cooking I needed to fill-in during lunch service.  I disliked working lunch because making hundreds of egg dishes can prove surprisingly stressful.  On this particular day, the chef returned with an order I had sent out—an omelet.  A true French omelet is not easy, it takes speed and precision as well as lots of practice. You need to scramble the eggs furiously with a spatula while continually shaking the pan on and off the flame. The pan must be banged on the burner at the end of the cooking process to “set” the omelet, which creates the smooth silky cooked egg look. But there can be no coloration whatsoever.

When making an omelet, timing is critical, overcooking makes the omelet dry.  An omelet must also be quickly filled, rolled (not folded), plated and served immediately. There is little time to spare. Two of the most well-know French chefs,  Andre Soltner and Jacques Pépin, taught me and my culinary school class how to make a perfect French omelet.  That say was by far the hardest, most exhausting day I ever had in culinary school.

The kitchen, during lunch service all those years ago, was, per usual, quiet, except for the sound the plates made while being slid across the stainless steal countertop ready for pick up. But that day a plate was returned to the kitchen. The chef placed the plate (an omelet I made) high in the air above him and began parading around (almost dancing) in the kitchen while screaming; “Andrea is in love, Andrea is in love” repeatedly.  He did this in a taunting manor, with his thick French accent witch seemed to elongate the word “l-o-v-e” more so than normal.  Apparently I had over salted the omelet that had been returned. According to him (and he claimed, the French) one who over salts anything is madly in love, their judgment is clouded and their tastes are confused. I was mortified.

I was embarrassment by a few different things, but mainly because I had a new boyfriend (my now husband) and everyone knew it.  With only men in the kitchen there was no one to share my glance of embarrassment as I stood completely frozen, spatula in hand. I was speechless, I was the rookie and we all knew it.  Wanting this moment to end, I quickly made a new omelet and gave it to the chef. The second omelet did not get returned, but from that day forward, I watched my salt very closely.

I am a big admirer of what has come to be known as “artisan crafted salts”.  In addition to loving the salty goodness, I also love pretty, well-packaged brightly colored, unusual cooking salts. Little petite bottles, cute mini cellophane bags tired with raffia, miniature tins, long slender glass tubs with small corks, you name it, I’m a sucker for it.

My love of specialty salts is so great; I often give these specialty seasonings salts as hostess’ gifts to friends. Salt, complimented with a little salt box (I love the wooden ones with a swing top), are a great addition to any kitchen. These lovely little salts are however, not cheap, they can run you a good amount, especially if you are lured by the added truffle flavoring like I myself have known to be.

But what actually is salt?  Table salt, like the well know and recognizable Mortons, is a mineral composed primarily of sodium chloride, a chemical compound belonging to the larger class of salts.  Salt, in its natural form, is known as a crystalline mineral more familiarly known as rock salt or halite.  Salt is also present in seawater and can be processed from salt mines, or by the evaporation of seawater, which becomes sea salt.

Kosher salt, is similar to table salt, but with a much larger grain. Unlike common table salt, Kosher salt typically contains no additives, such as iodine.  Chefs often use Kosher salt because its texture allows the chef to pinch a larger quantity of salt and evenly sprinkle the flakes on food.  Also, because there is no iodine, flavors are cleaner and brighter.

There is also something called ice cream salt, which is actually rock salt, similar to table salt with a coarser, chunkier size.  For everyday cooking I typically use La Baleine Sea Salt, from the south of France, it is readily available and reasonably priced.

Below is a sampling of the artisan finishing salts in my pantry today.  I encourage you to look beyond their beautiful packaging and pretty pastel color and find some use for them in your everyday cooking-it’s what they’re for. 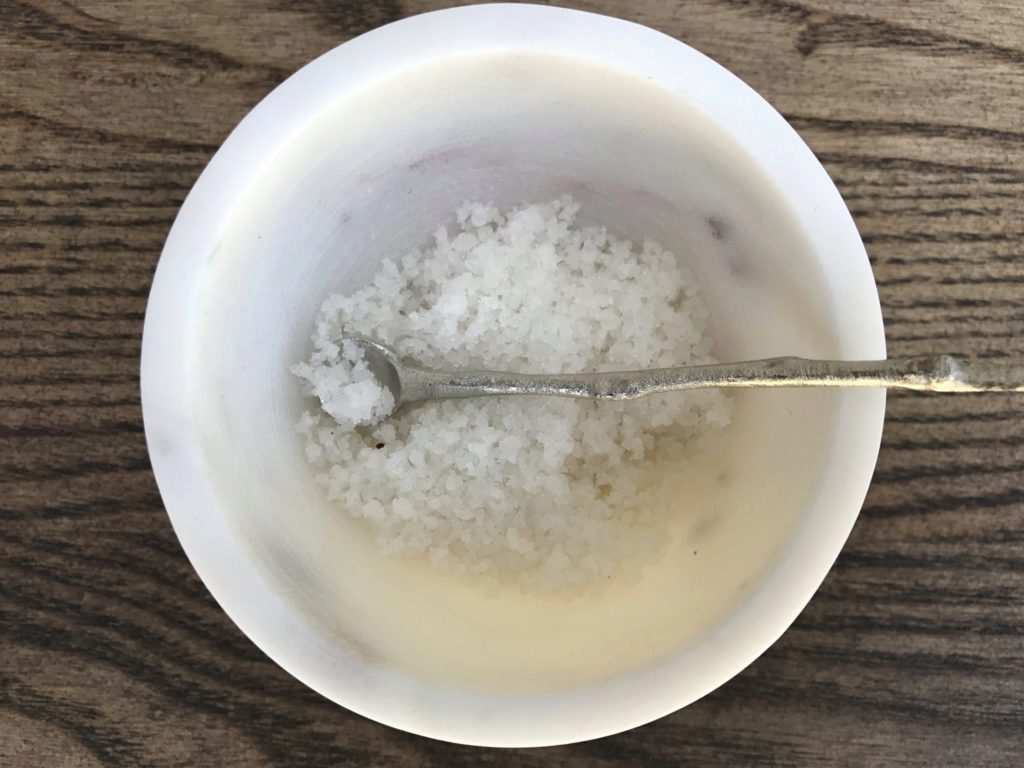 Fleur de Sel: In French it is known as “the flower of salt”. This famous and delicate salt, which forms a thin, delicate crust on the surface of seawater as it evaporates, has world recognition in the worlds of salts. All chefs have it in their salt arsenal. The names is taken from the flower-like patterns the crystals make in the salt crust. Fleur de sel has been collected since ancient times and is a standard in French cooking. Typically this is used as a finishing salt to flavor and garnish a dish before eating 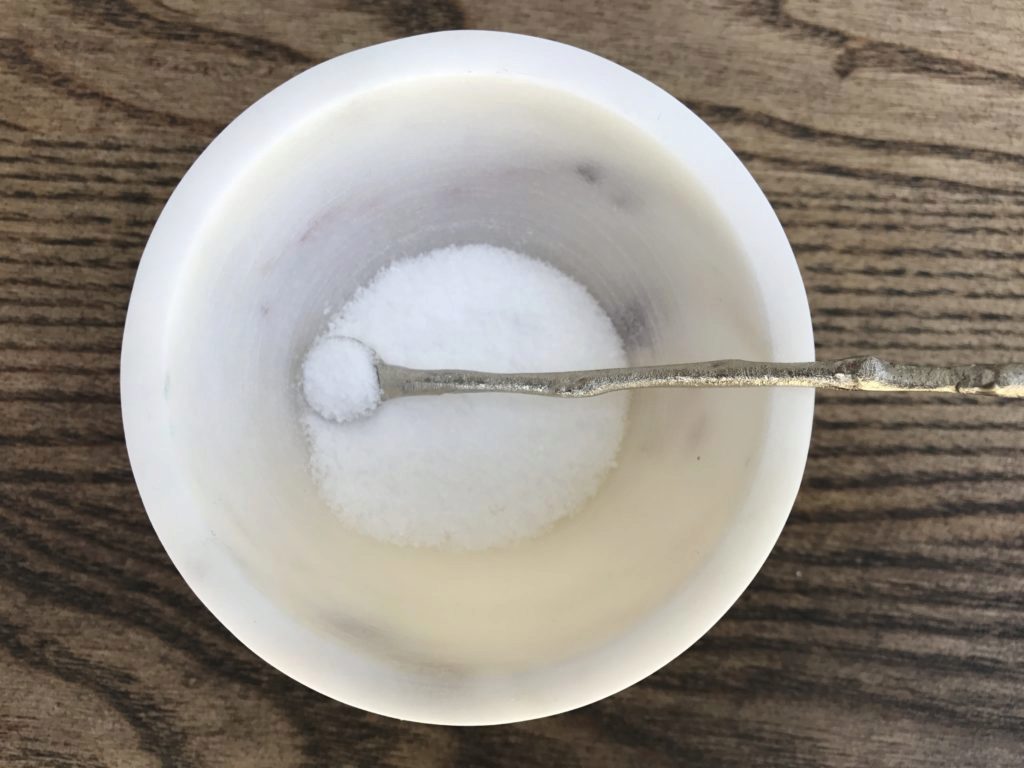 Flake Salt: This refers to a category of salt known for their dry, plate-like crystals. Flakes occur naturally, but can also be produced by other methods; such as, boiling brine over salt pans or in a greenhouse using solar evaporators. These salts are irregular in shape and have lower trace mineral content giving them a saltier taste. Flake salt forms as a thin flattened crystals creating a crunchy texture that dissolves quickly, making it an ideal finishing salt. 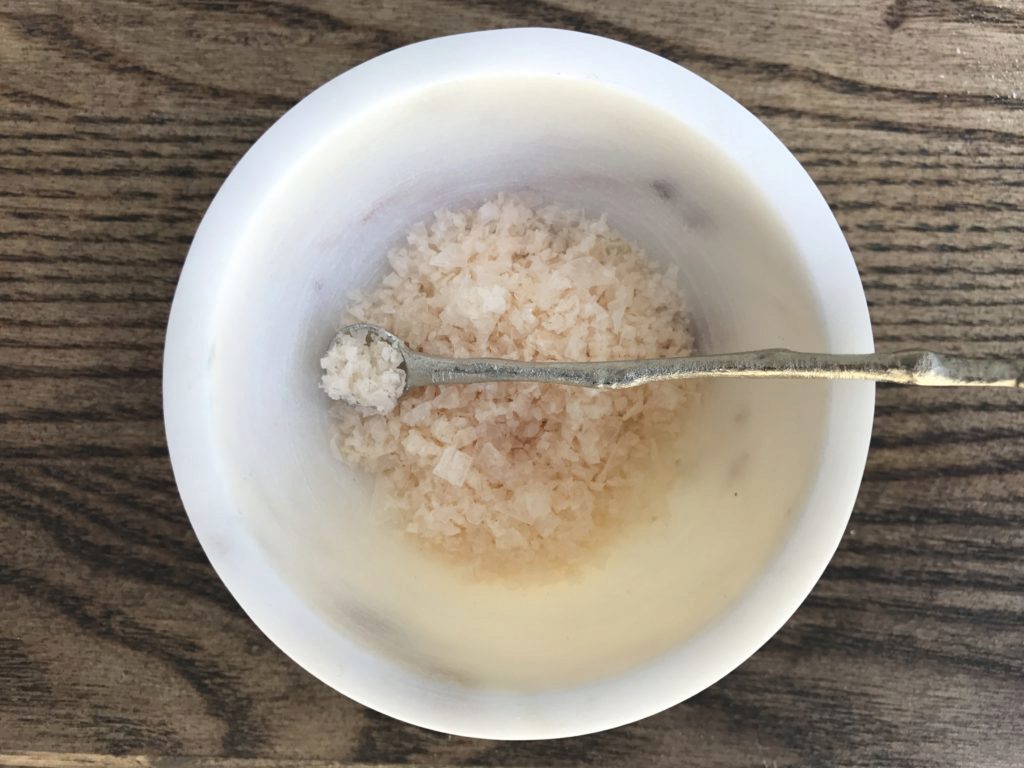 Australian Pink Salt: Often referred to the “satin of salts,” this salt is considered more delicate than Fleur de Sel. A delightfully crunchy texture and lovely aroma. The unique pink color is high in minerals causing a pinkish hue and is popular with foodies. In Australia, it is the norm.

This salt is produced from ancient saline waters from underground aquifers near Australia’s Murray River Darling Basin region. The crystals are light, salty and melt quickly and evenly for cooking and finishing dishes. With it’s soft mineral taste it can enhance your food without overpowering it. 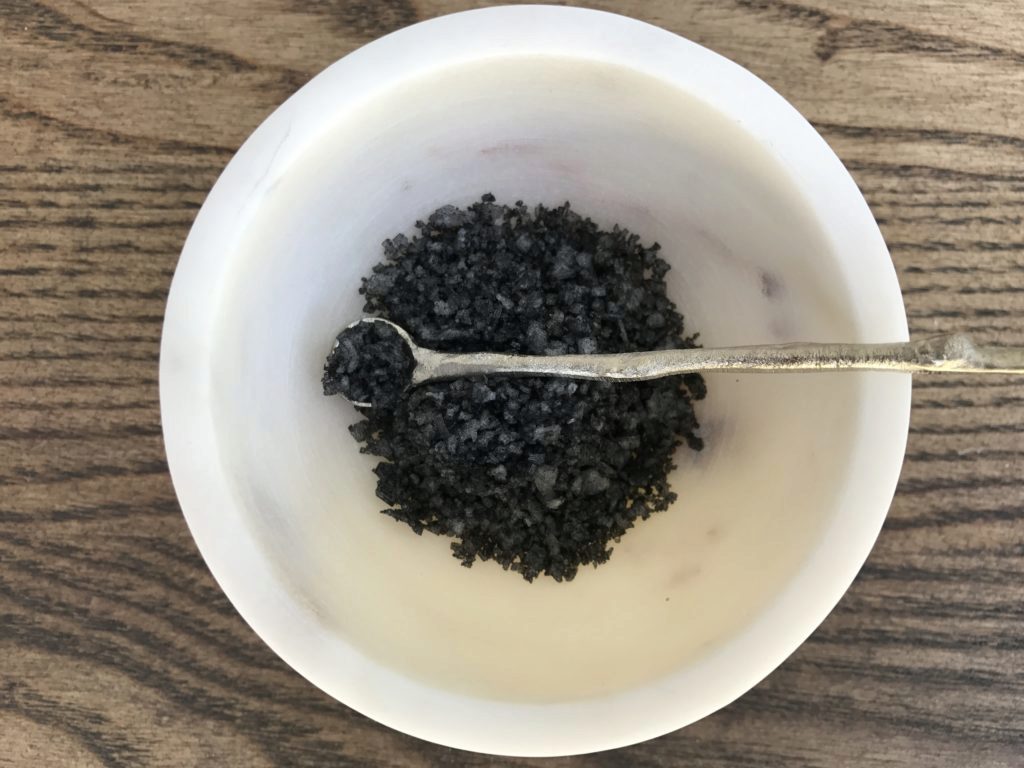 Lava Salt: This is marketing genius. Really a term for a sea salt blended and colored with activated charcoal to achieve its dramatic appearance. These salts are often harvested from the Pacific waters by way of solar evaporation. This process which allows the salt crystals to form with the trace minerals intact. Primarily used to decorate, it has subtle earthy, slightly smoky flavor than can even compliment desserts. 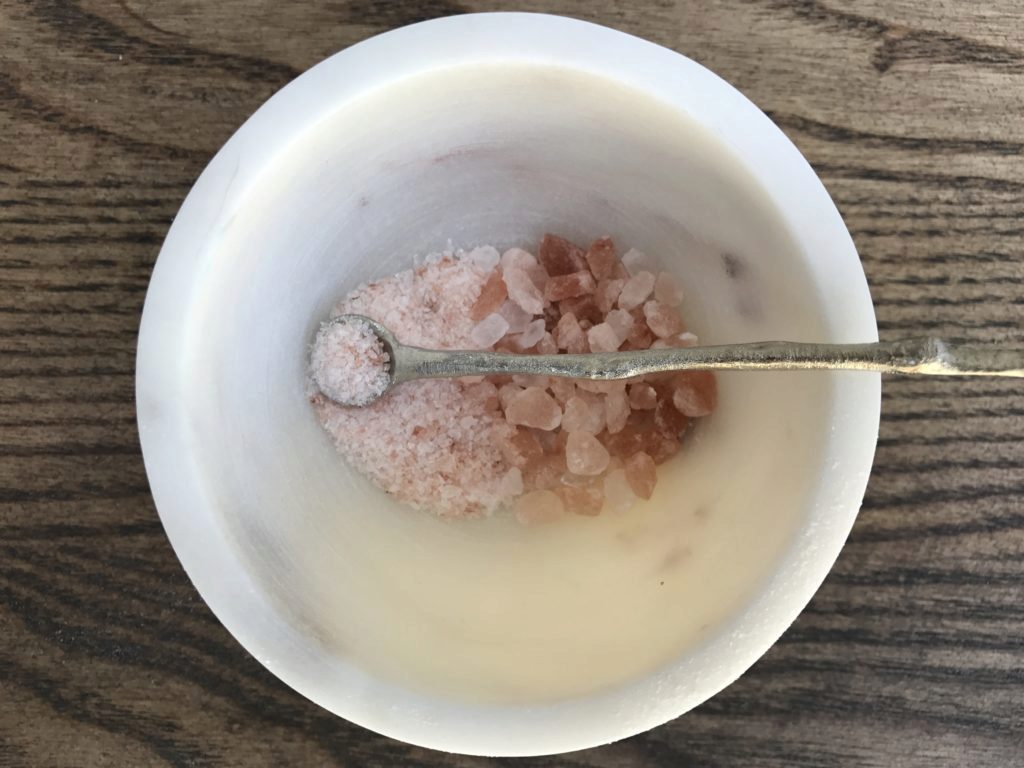 Pink Himalayan Salt: Actually a rock salt or “halite” from the Punjab region of Pakistan. Very similar to table salt, the crystals have an off-white/transparent color with some impurities giving it a slight pink/red color. Himalayan salt can commonly be found as course grains, fine grains or in large blocks used as serving platters/seasoning trays. 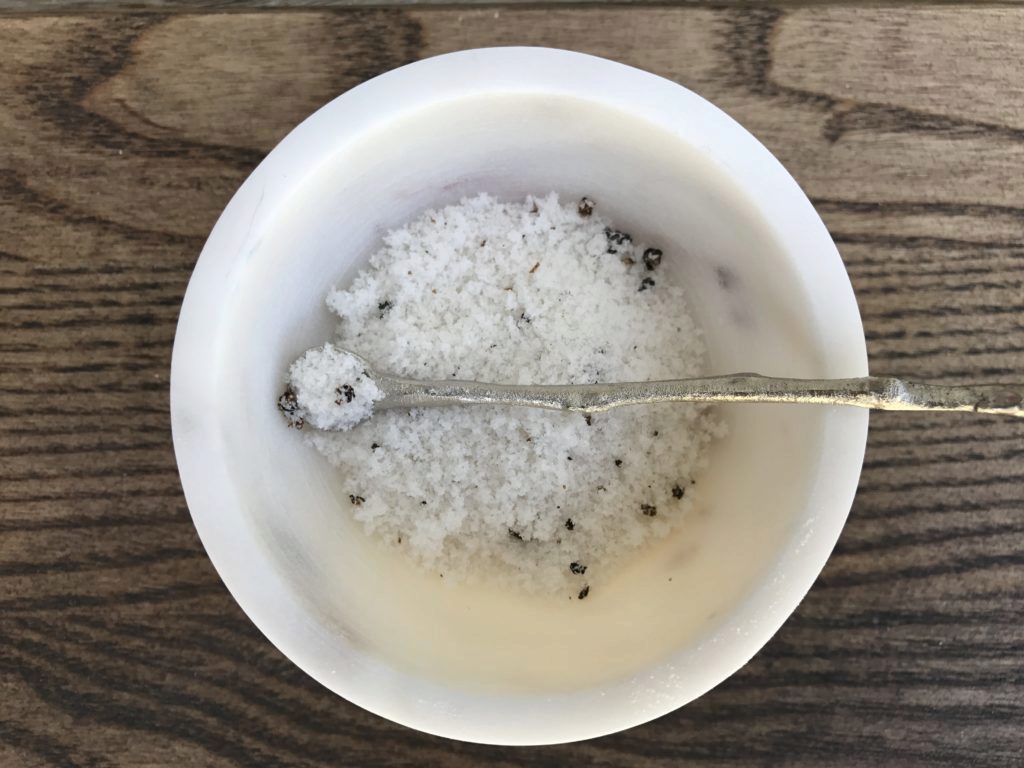 Black Truffle Salt: A truly beautiful and perfect finishing salt if you ask me. Typically this is a natural sea salt mixed with small fragrant pieces of Italian black or white truffles. A delicious earthy, slightly creamy flavor can compliment almost anything, from eggs to meat. An ideal paring, the sea salt enhances the complex truffle flavor creating a rich aroma adding complex flavor. 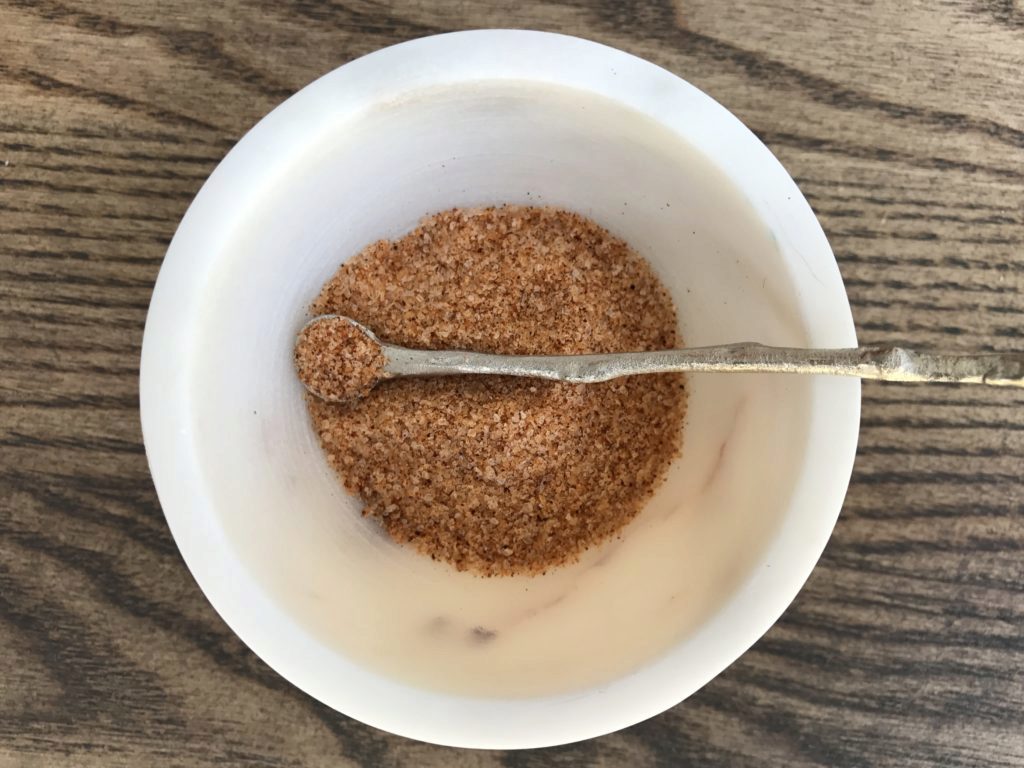 Sriracha Sea Salt: A popular fusion salt combining sea salt and a zesty, tangy heat of the Sriracha hot sauce.  Sriracha, the  Thai chili sauce, is named for the small coastal Thai town of Si Racha, has rocketed in popularity recently. This popular hot sauce continues to appear in everything from ketchup to potato chips, and now salt.  The sauce, made from chilies, garlic and vinegar compliments almost anything on its own.   Adding flaky, crunchy sea salt is a great way to add a sweet and spicy boost any dishes. Try this in melted butter on popcorn, it will not disappoint.