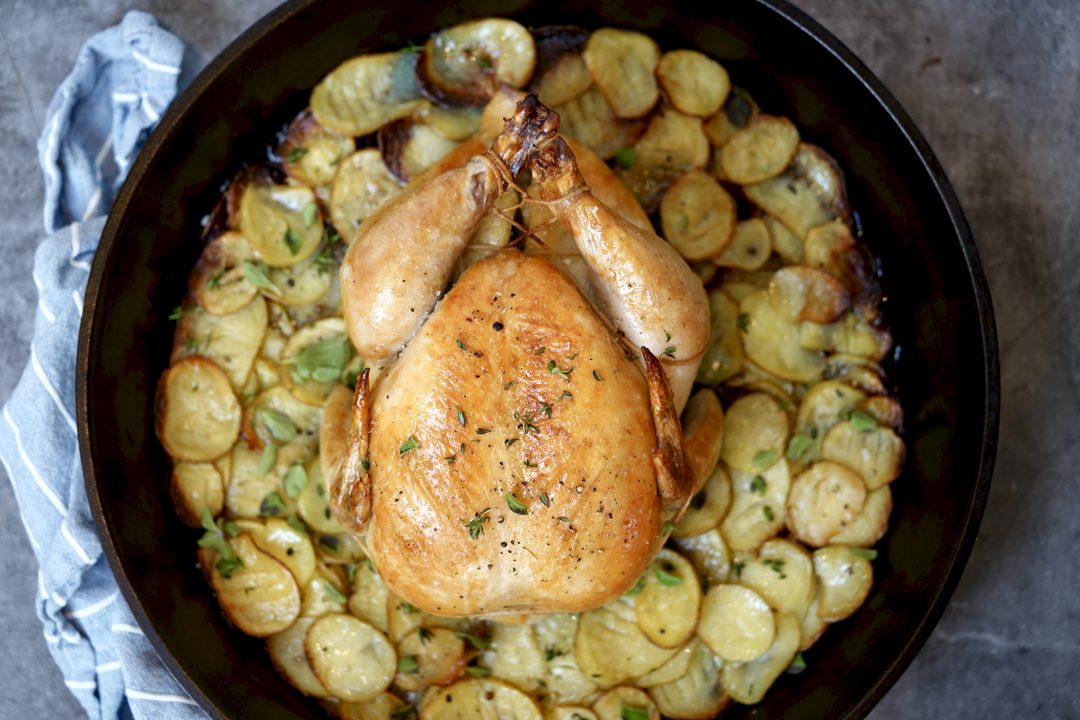 Winner winner chicken dinner. Can anyone ever have enough chicken recipes? Here is a fantastic one and one that has been on repeat in my house for some time now. But before I tell you why I love this dish so much, I need to offer a little back story on this popular phrase that everyone seems to know about.

For anyone under 25 years of age, “winner winner chicken dinner” seems to be a direct reference to “PUBG” (Player Unknowns Battlegrounds). This phrase became uber popular online after the release of the 2017 multiplayer shooter video game. Apparently, if a player manages to be the sole survivor of the game, they are greeted with this chicken praise upon winning. Those that are older, associate this phrase with the Las Vegas scene. And this is because during the 1970’s, an actual chicken dinner in Las Vegas used to cost less than $2.00 and the usual bet at that time was about $2.00. So, when you won you had enough for a chicken dinner. Hence “winner, winner, chicken dinner!” 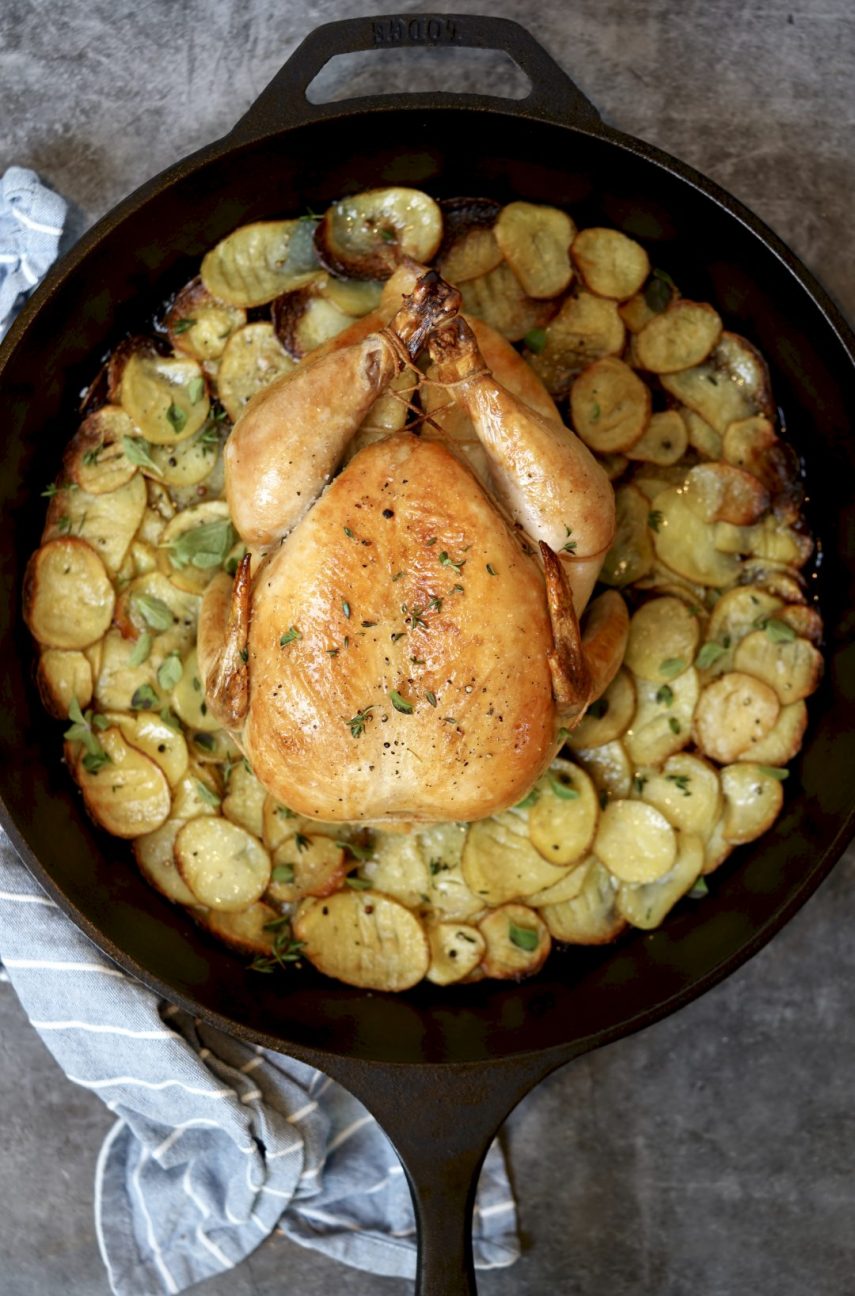 But apparently this catchy phrase actually goes back another 40 years to 1933, when President Roosevelt’s policies on workers’ rights which propelled one of the first Milwaukee strikes at the Sperry Candy Company. Edgar Wood, the attorney for the candy company, helped bring the company and strike leaders together to settle the dispute. Afterwards, once everyone agreed and was happy with the re-negotiations, Edgar Wood stood up and proclaimed the mutual beneficial settlement as “Winner Winner, Chicken Dinner.”

No chicken dinner article would be complete without mention of the chicken dinner candy bar. Yes, I am totally serious. Introduced in 1923 by the Sperry Candy Company, the oddly named bar sold for 10 cents and featured a roasted chicken on each package. “An expensive, high-grade candy” was how Sperry described Chicken Dinner, giving it a puzzling air of exclusivity, considering it didn’t contain any actual chicken, but rather, it was filled with nuts and coated in chocolate, that kids were the target market for. This candy predates me, production of Chicken Dinner bars ceased in 1962, so perhaps ask a grandparent if they’ve ever had one–I sure am curious. 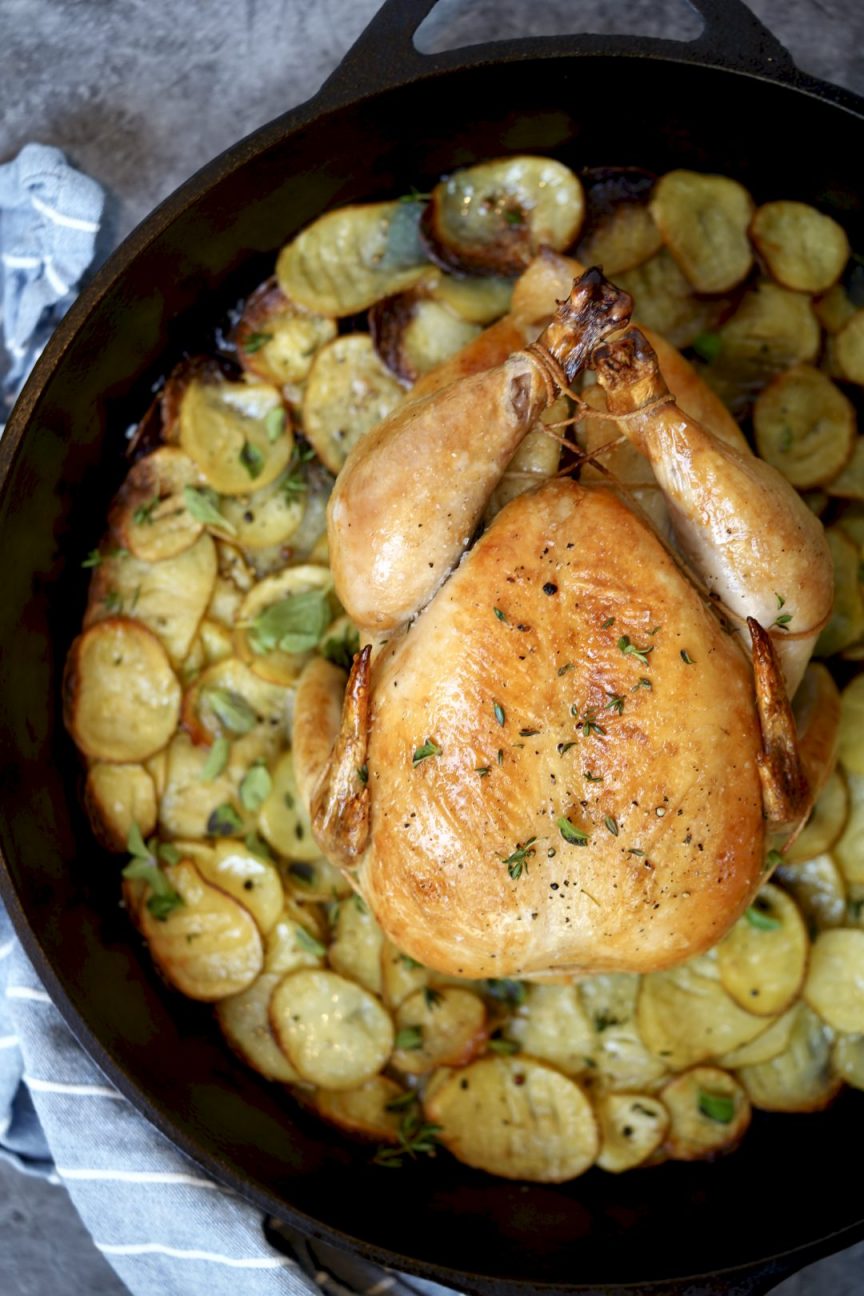 Catch phrase aside, this cast iron chicken with potatoes dish is a true winner. Why? because it’s simple, straightforward and best of all, effortless. The cast iron magic is the trick in this any-day-of-the-week comfort meal. The thinly sliced potatoes crisp up nicely thanks to the cast iron pans ability to retain heat.

Cast iron’s weight is another reason why it perform so well. Although cast iron doesn’t conduct heat that well; it’s slow to heat up and cool down, and until fully heated, will have hot spots. But, its weight and thickness compared with other metal pans means that once it’s heated, it retains that heat, making it the top choice for all kinds of cooking methods. As oil seeps into the surface of the pan, it eliminates any microscopic roughness on the metal that can cause food to cling, creating a virtually nonstick surface. 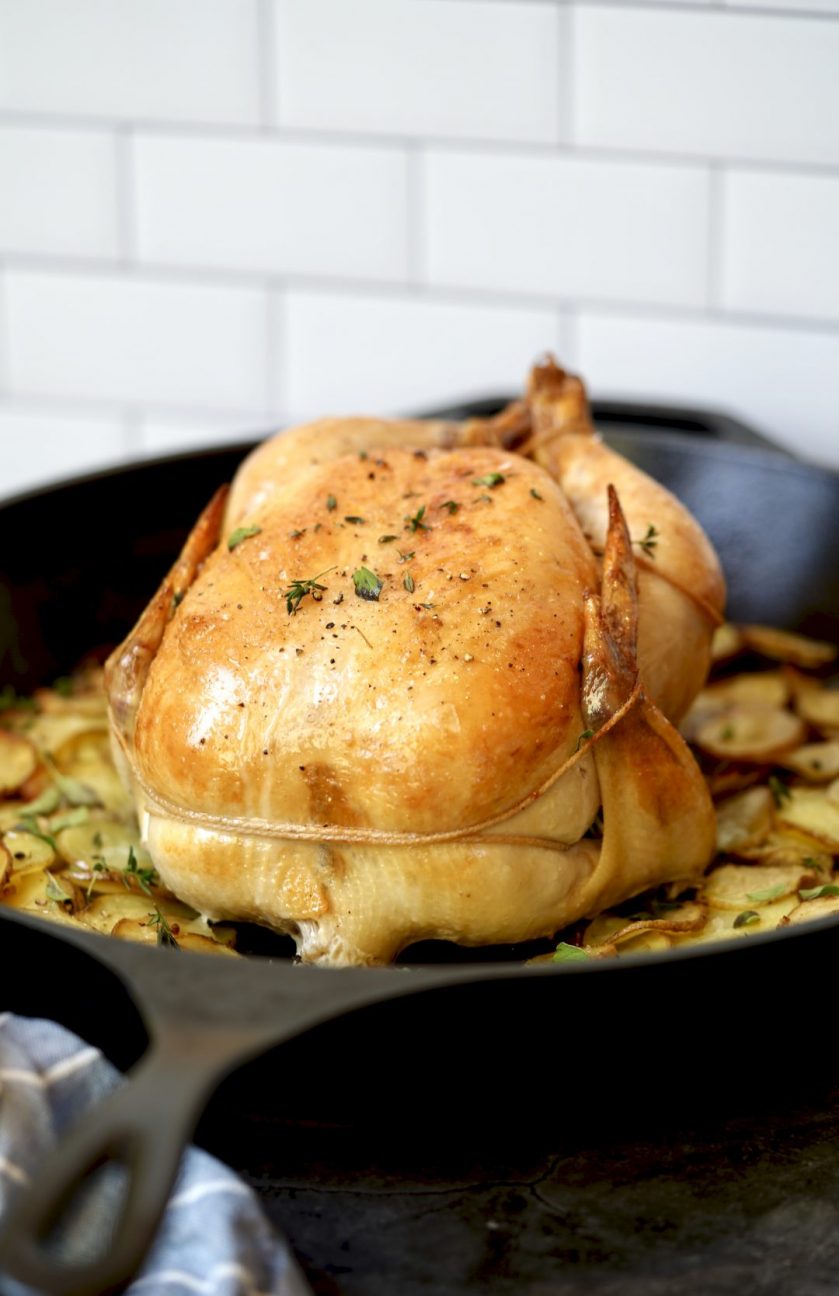 Nowadays, a new cast-iron pan will likely come preseasoned from the factory; both Lodge, the largest maker of cast-iron cookware in the United States, and Camp Chef sell them that way. Yet even a preseasoned pan will continue to improve with use. If you don’t already cook and bake with cast iron, it’s time to start. Below are some important tips for seasoning and caring for your cast iron, to make it last for years to come.

How To Season Your Cast-Iron Skillet: 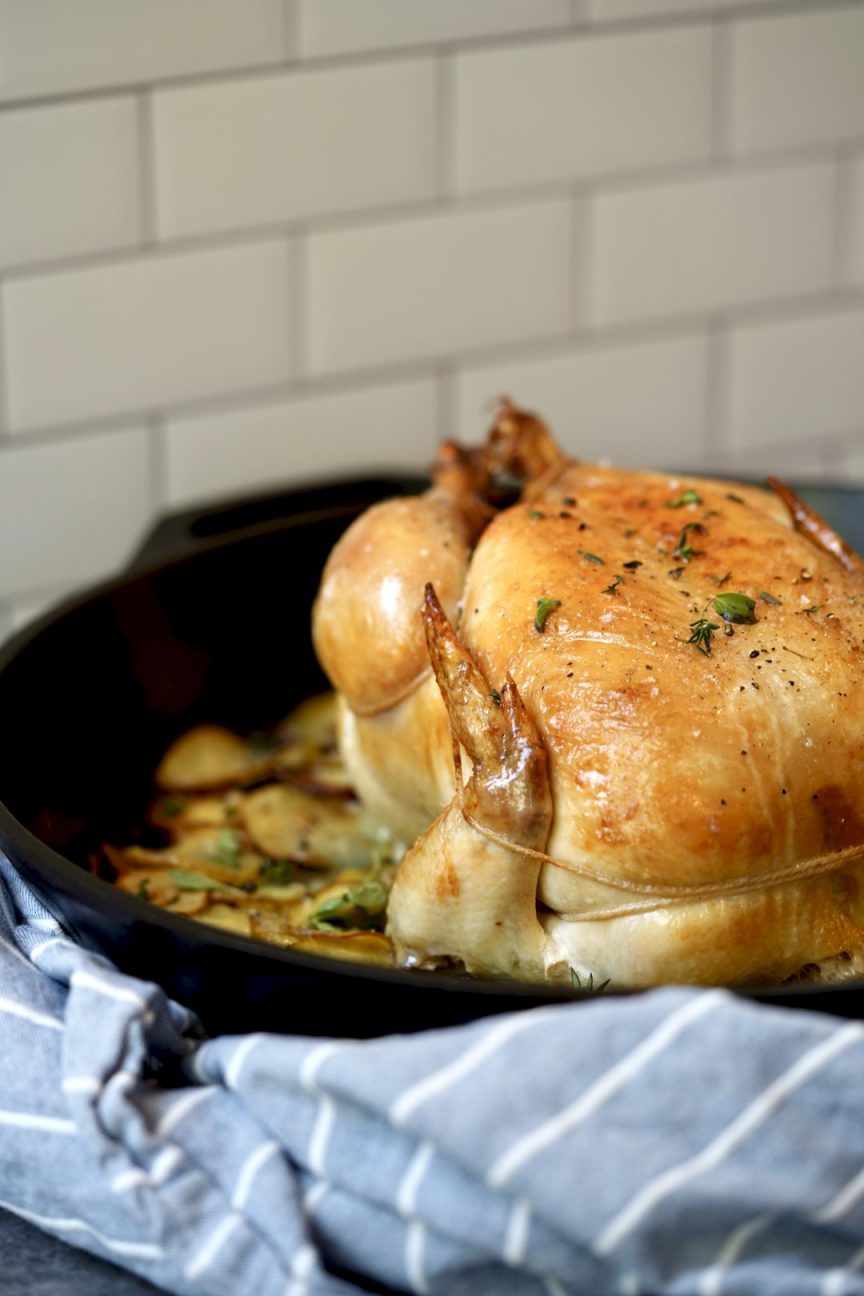 How to Care for Cast Iron:

The takeaway, if you don’t have a large cast iron skillet yet, no judgement, but go get one and give this foolproof winner winner chicken dinner a go. 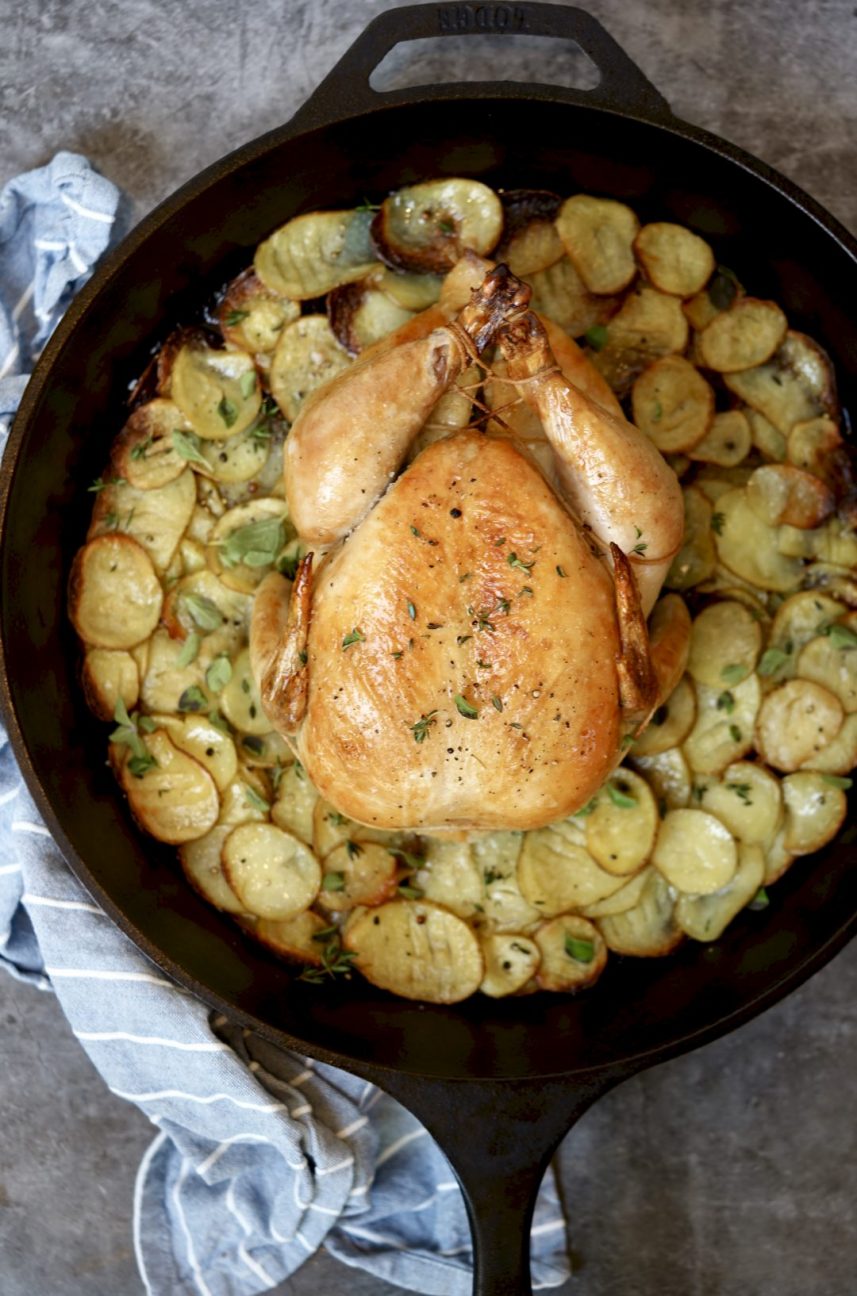