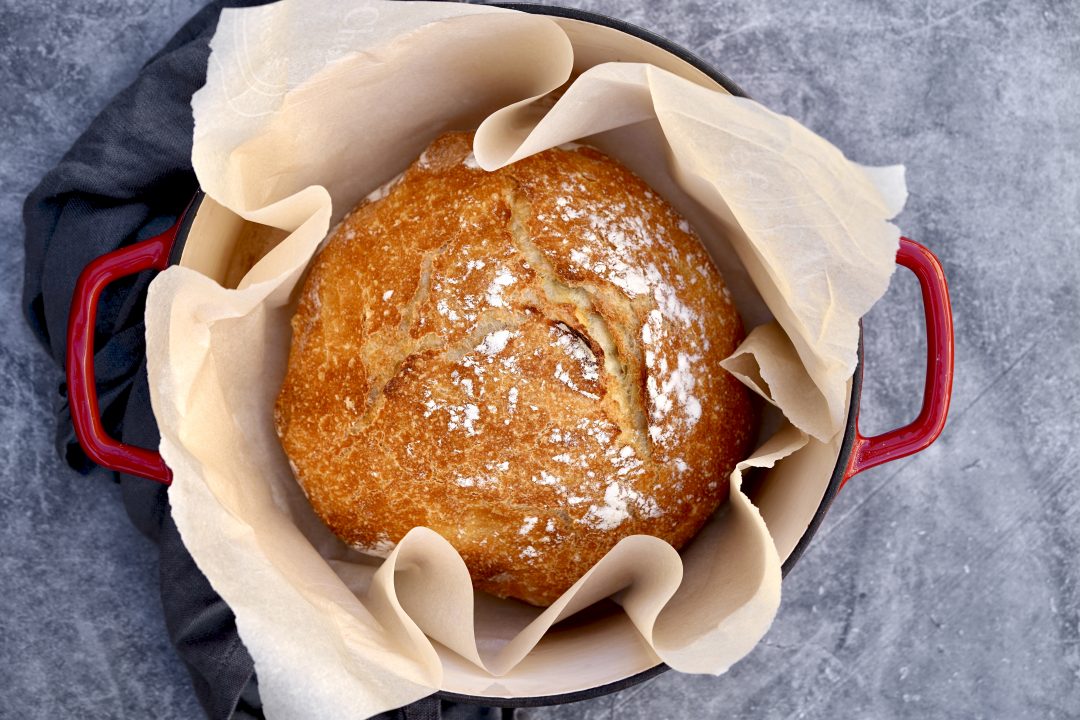 Bread, of all kinds, has been the internet darling during the COVID pandemic. I too fell into that rabbit hole. I have spent weeks perfecting the texture and crumb of each type of bread I tackled. This Dutch oven bread, also called no-knead bread, is one of the first easy breads I took on. This bread recipe is considered a less labor-intensive bread recipe. With this recipe you prep, let it rise and bake off in a Dutch oven when you’re ready to go. The end result is a fantastic simple bread, that is soft on the inside with a light, tender, almost flaky crust on the outside. 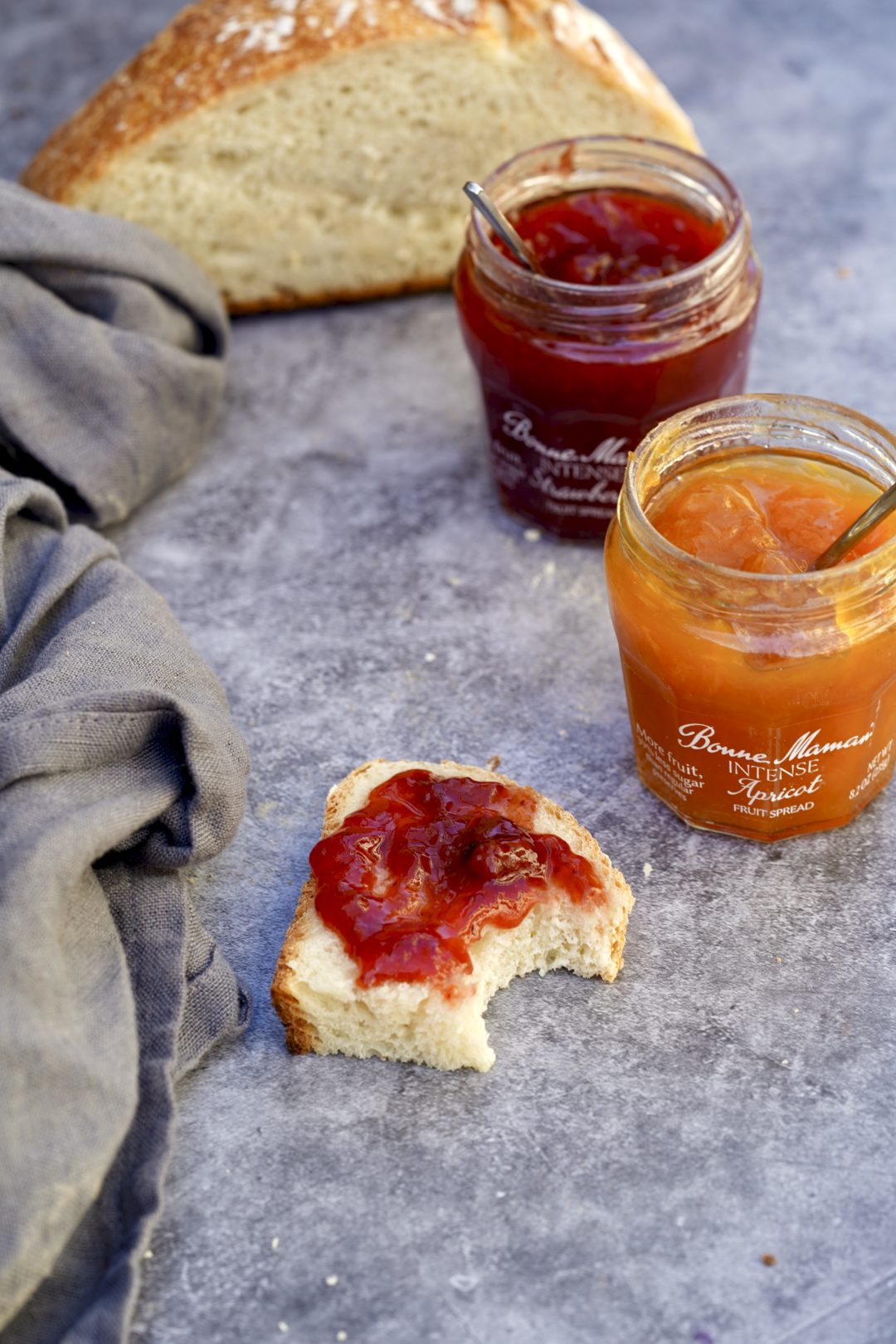 The technique used in this Dutch oven bread recipe is a no-knead method of bread baking similar to my Panettone recipe. The no-knead method uses a long fermentation (rising) time, instead of kneading, to form the gluten strands that give the bread its texture. It is characterized by a low yeast content and very wet dough. This is a vastly popular go-to bread for home cooks due to it’s less intimidating technique. Forgiving in nature, Dutch oven bread comes out perfectly each and every time. 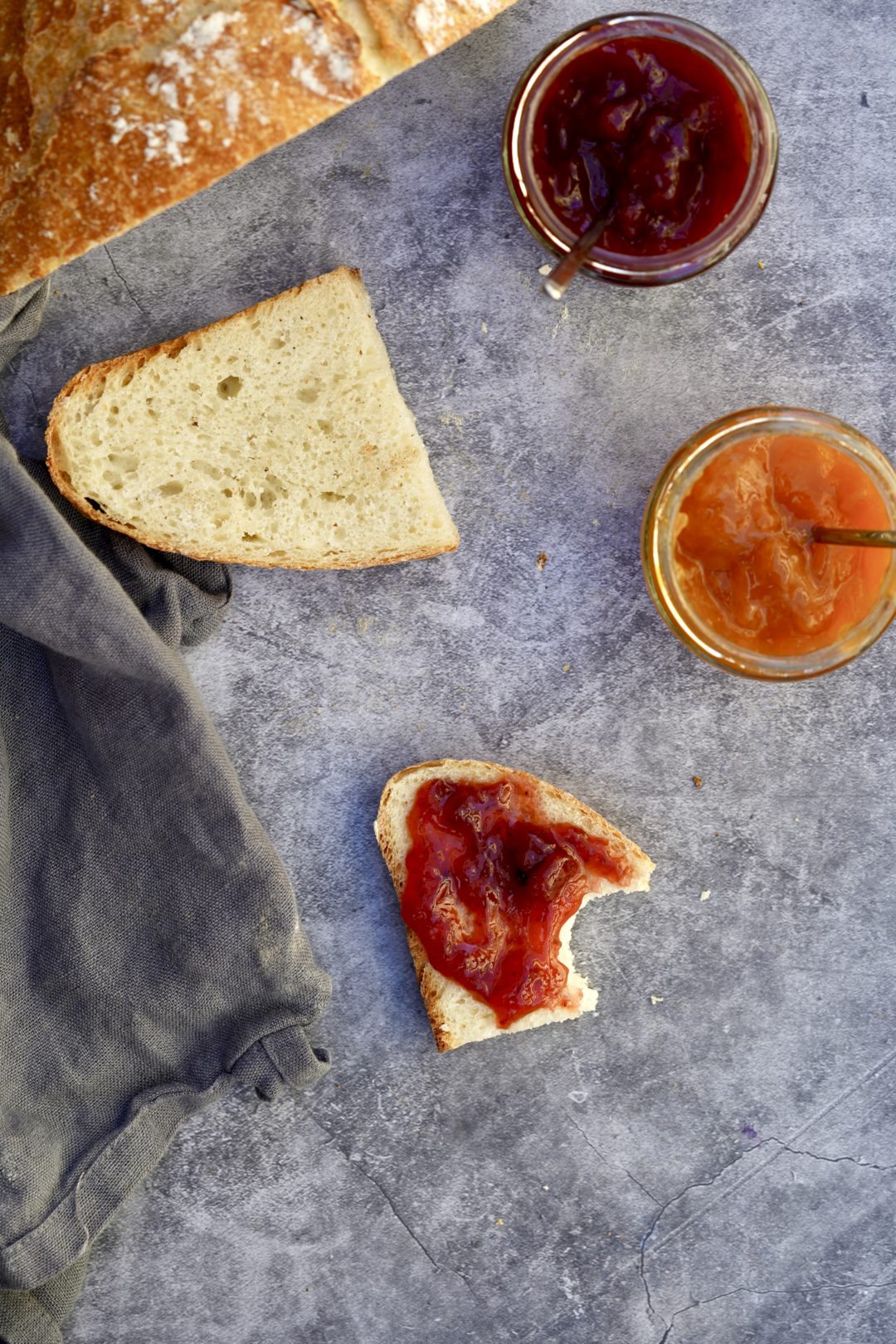 A Dutch oven the perfect vessel for making all kinds of artisan-style loaves. The steam that’s created inside the pot miraculously transforms the dough, ensuring the bread’s crust will shatter into delicate shards with each bite and heres the reason why.  Unlike typical bread methods, Dutch ovens create a steamy environment for bread to bake. The results are superior lift (height) and a fantastic crispy crust. 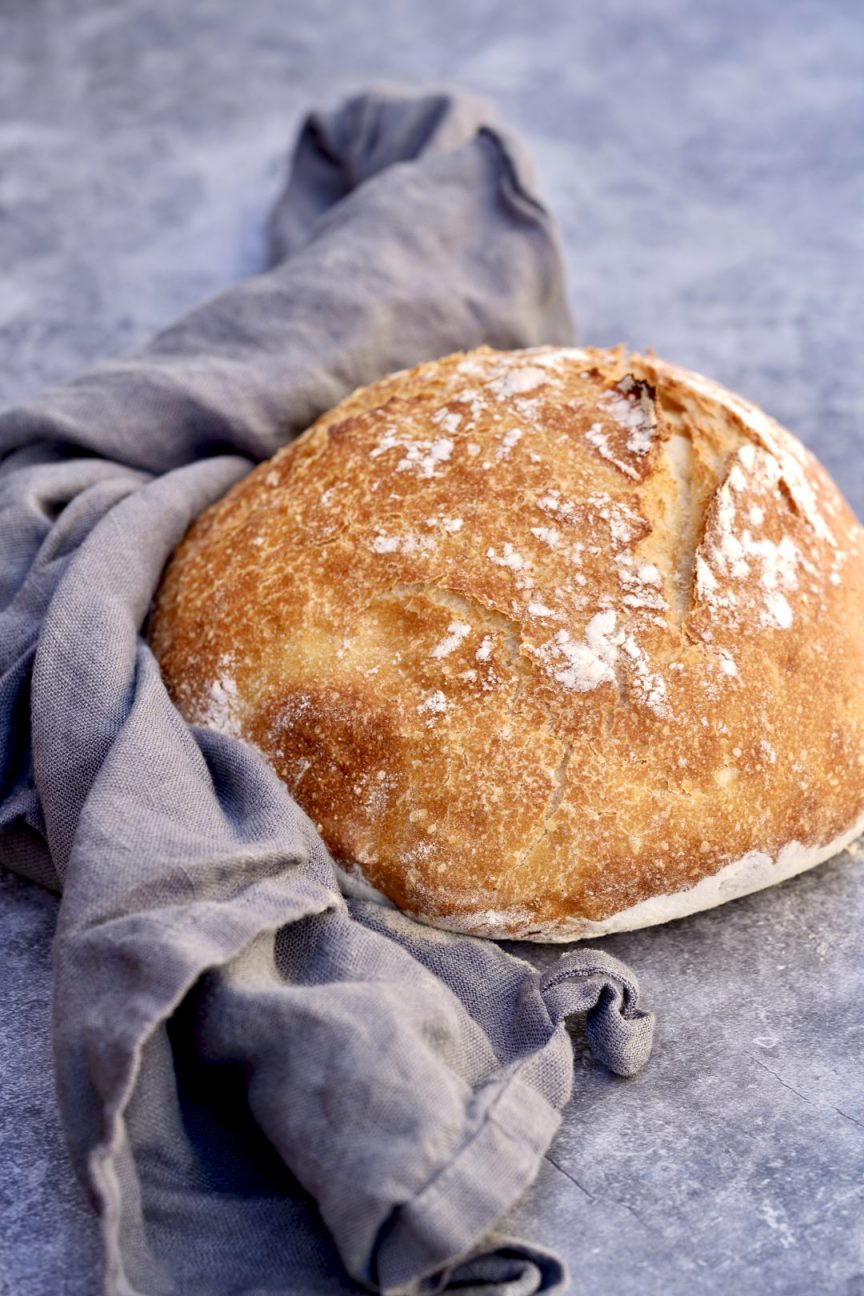 Most don’t realize  it, but steam does a lot to improve bread as it bakes. Moisture keeps the crust from forming as quickly, which gives the bread more time to rise. It also gives the yeast more time to do its  job of converting starches to simple sugars, which in turn equals more flavor. And while there are a lot of ways to steam up your oven such as placing boiling water in a pan on the bottom rack, or spritzing water into the oven just after putting your dough in, but the beauty of the Dutch oven is that the lid keeps all that steam inside.

The other thing that makes Dutch ovens great for baking is how well they hold heat. Most home ovens don’t stay at a constant temperature; they fluctuate up and down in order to stay around the preset temperature. (This is why recipes often have a range for baking times). Because Dutch ovens are so thick, they retain heat well, and therefore keep bread baking at a constant temperature better than thin trays and pans. Many people will ask do you have to use a Dutch oven and the honest answer is no, any lidded pot can typically work, but a true Dutch oven will yield a moister, crisper crust bread. 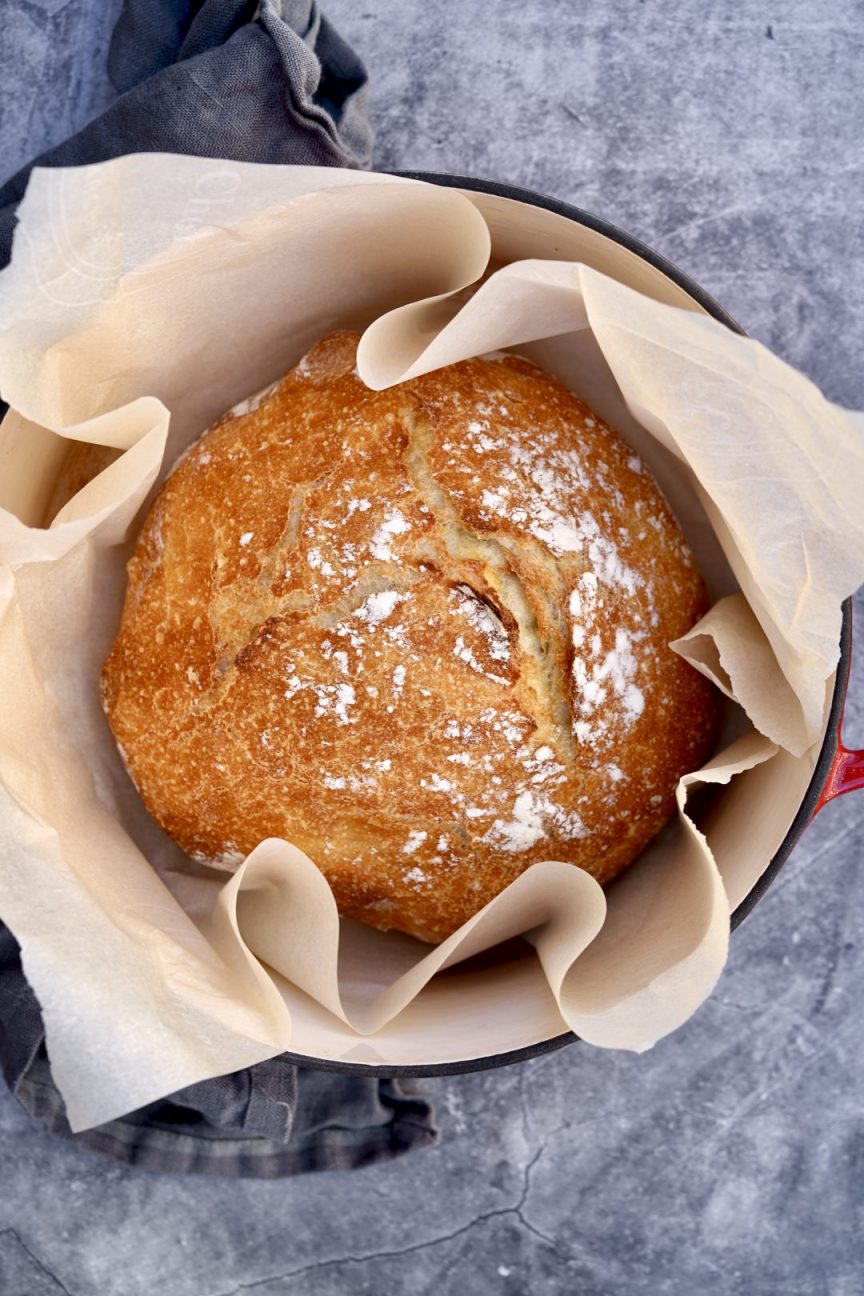 Tips On How To Prevent Burning When Baking Dutch Oven Bread:

So if you’re new to the bread-baking world and don’t want to invest in expensive bread pans, you can start making bread with the tools you already have and go from there. 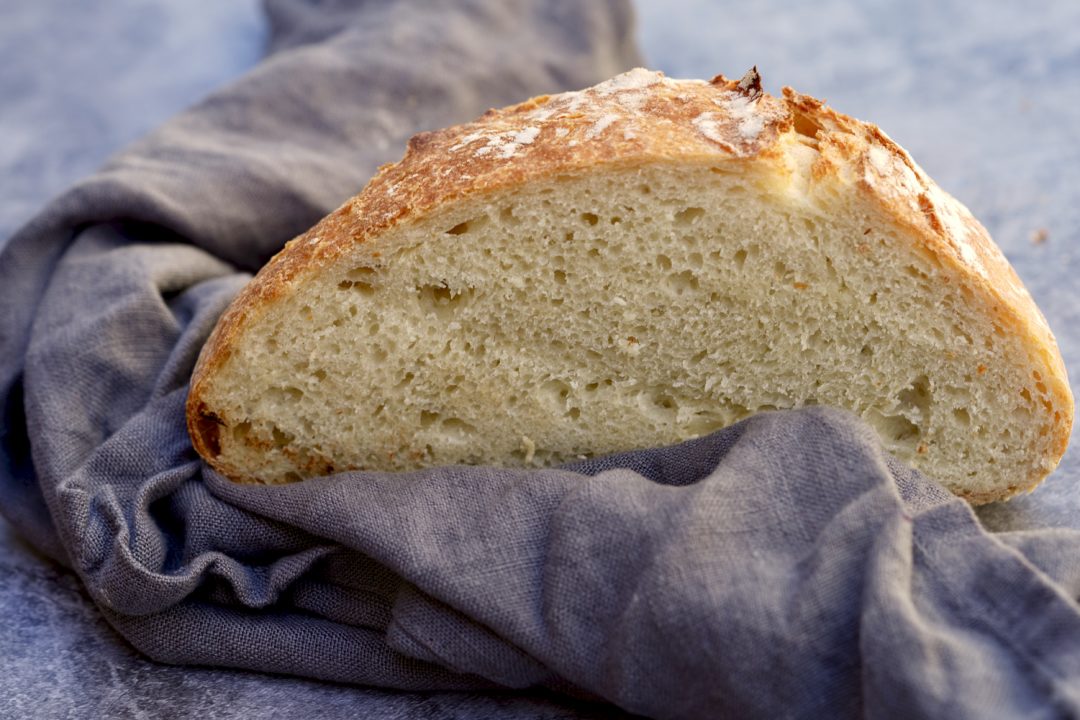