Changemaker Series: The Girl + The Fig’s Sondra Bernstein And Her Iconic Grilled Fig And Arugula Salad 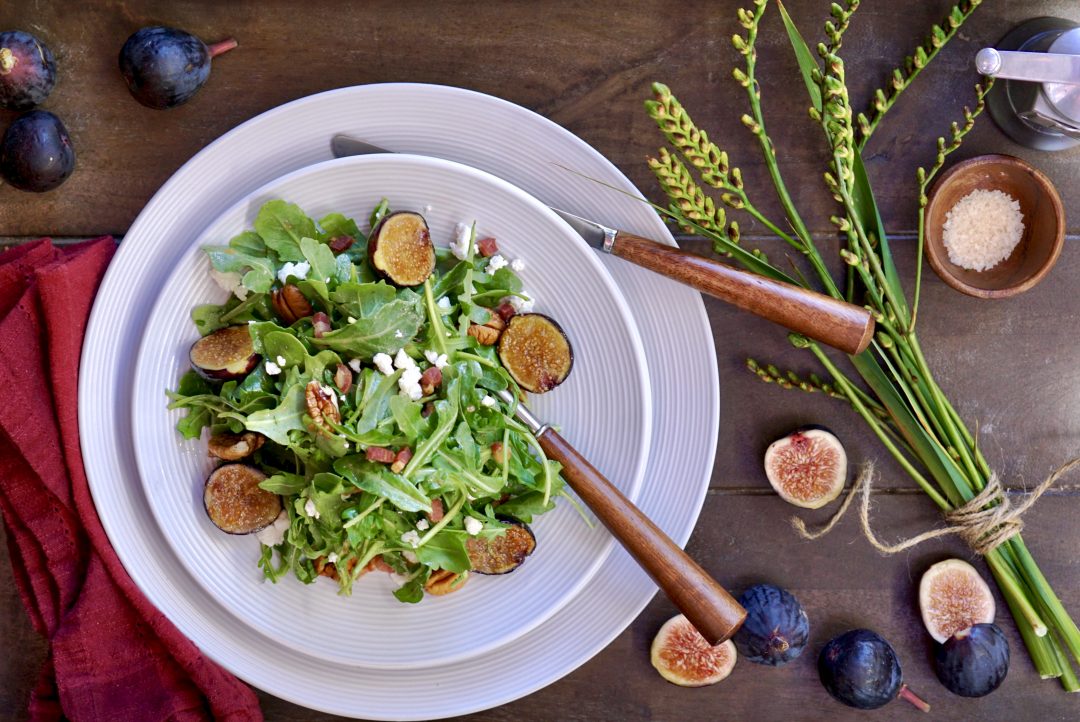 Chef and restaurateur Sondra Bernstein, founder of Sonoma’s wildly popular wine country farm-to-table eatery the girl & the fig, is my featured Changemaker for November. Bernstein, whose mantra is “doing one thing is boring,” is someone I have long admired. A one-women show, Bernstein is credited with “putting Sonoma County on the big-league culinary map 20 years ago when she opened her first restaurant, the girl & the fig”. But her flagship restaurant is just one of the many successful endeavors Bernstein has launched in two short decades.

Growing up, Bernstein says that she “did not think much about food” and was leaning toward a career as a photographer. Her first job after graduating from Philadelphia Collage of Art Design was at TGI Fridays of all places. Bernstein says that she is “thankful for that.” After earning a degree in restaurant management from The Restaurant School in her hometown of Philadelphia, Bernstein knew she did not want to be a chef.  But she knew she was destined to be in the restaurant business.

After managing several restaurants on the East Coast, Bernstein headed West to Los Angeles and visited Sonoma for the first time in 1992. It was “love at first sight” and Bernstein would relocate to wine country permanently just three months later. One of Bernstein’s first jobs in Sonoma was managing the Italian deli at Viansa Winery. While working at Viansa, she was able to fully utilize her restaurant management degree and management experience from TGI Fridays, working her way up to become Viansa’s director of operations. During her tenure, customer visits increased from 50 to 3,000 per day. Her confidence in her abilities to successfully grow a business led to the desire to work for herself. She aligned herself with the talented up-and-coming Chef John Toulze (who also worked at Viansa), who was on board with what would become the fig philosophy: “country food with a French passion“.  Years later, Toulze is still Bernstein’s Company Managing Partner, President and Executive chef.

With loans from her brothers, Bernstein opened girl & the fig, in its original location, just a 42-seat space in Glen Ellen. The restaurant was a success from day one, and just three years later Bernstein relocated girl & the fig to its now permanent home in the historic 1879 Sonoma Hotel on Spain Street. What followed in Bernstein’s empire (my word, not hers!) was the fig café & wine bar, a catering branch, Suite D a flexible event venue, the fig rig food truck, and The Rhone Room wine bar. But that’s not all. Bernstein has also penned two well-loved cook books: The Girl & The Fig Cookbook and . A third cookbook got shelved after Bernstein launched a quarterly newspaper called Fig Chronicles, which covers seasonal culinary topics from local farmer profiles to cocktail tips. And if that’s not enough range for you, Bernstein has recently launched herself into philanthropy in her spare time. In 2016, Bernstein launched the Sonoma FIG Foundation, which “assists in funding for start-up entrepreneurs in food, farming, food media, wine and spirits, restaurants and artisanal food production.” If that weren’t enough, Bernstein also developed her own line of “fig food” including shrubs, vinaigrettes, nuts, jams and sweets, private label girl & fig wines made by winemaker friends,(in which Bernstein showcases her favorite grape varietals, grapes that originated in the Rhone region and now grown all over California), as well as her own FIGBODY line including Tuscan fig infused body lotions and specialty goat milk soaps.

Bernstein has also had her share of bumps in the road including a brief 15 month run of a second girl & the fig location in Petaluma and a Latin American tapas place called the girl & the gaucho which never got good traction but where Bernstein picked up another important mantra to live by; “never focus on the bad news…creativity makes you vulnerable…you’ve got to just keep trying”. Although she’s technically closed as many as she’s opened, Bernstein is kind and thoughtful in all her business adventures bringing her devoted staff with her for the next ride. “It’s not rocket science, we are just feeding people, but we try to feed people’s souls and energy, and give them a place to turn off the world for a few hours. I really want us all to be kind, warm and genuine, and I never want to take success for granted.” 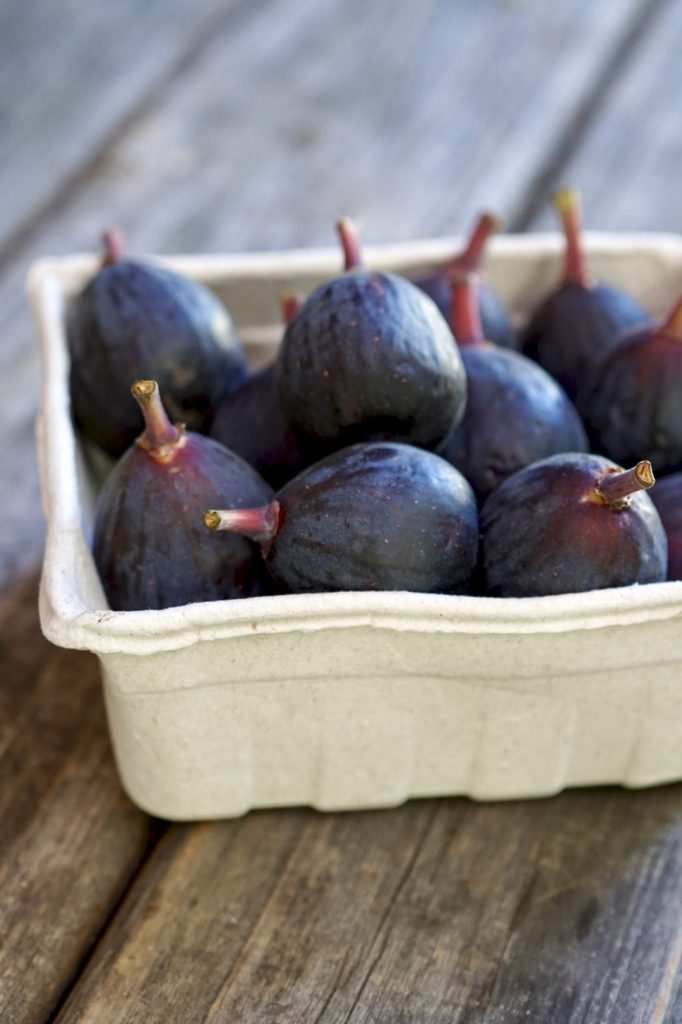 I was particularly drawn to Bernstein’s FIG Foundation (Funding Imaginable Goals) for my Changemaker series. In offering grants through the Foundation Bernstein’s desire to “pay it forward and share the passion [she has] felt as an entrepreneur over the past 20 years” depicts the very essence of my Changemaker series. Bernstein has been incredible successful and she simply wants to help others do the same. If you would like to help support Bernstein’s FIG Foundation, here’s how: 50% of all proceeds from the purchase of Fig Kisses both online and at the girl & the fig will be donated to the Sonoma FIG Foundation Fund, or you can donate directly to the foundation by clicking on this link.

Even with all of her success, at 58 Bernstein remains completely hands-on, working all day, every day and can occasionally still be found pouring wine for guests. She has 240 dedicated employees depending on her and because of that she takes her job seriously. She and partner Toulze oversee 26 managers who run the various aspects of her Sonoma food enterprise. After the devastating 2017 wildfires that ravaged parts of Sonoma Valley, not surprisingly, Bernstein became a vocal activist helping to bring her beloved wine country community back together to rebuild, get back on track and grow. The FIG Foundation’s focus stems from this, and Bernstein’s desire to help make others’ dreams attainable.

I had the pleasure of corresponding with Bernstein recently, below are excerpts of our conversation;

Simmer + Sauce: What made you decide to go into the restaurant business?

Sondra Bernstein: Totally by accident, realized I could not get a job as a Fine Art Photographer.

Simmer + Sauce: How did your flagship restaurant “the girl & the fig” get its famous name?

Sondra Bernstein: While having a drink with a friend and doodling on a bevnap thinking about possible names, a fig fell from the table and there it was – it had revealed itself.

Simmer + Sauce: Which cooking ingredients can you absolutely not live without?

Simmer + Sauce: As an incredibly successful female professional in a male-dominated industry, what have been the biggest obstacles you’ve faced and how did you overcome them?

Sondra Bernstein: In my early years in the business, I was on a fast track for advancement. This caused a stir in a company that had a lot of male contenders. I was not going to let anyone get in the way of my goals. The things that worked for me: Stand up for myself, work harder than anyone else, treat everyone with respect and fairness.  I didn’t use my feminine qualities to get assistance, and I didn’t flirt.

Simmer + Sauce: The Sonoma FIG Foundation is a new philanthropic venture for you.  What is your goal for the Foundation?

Sondra Bernstein: I am so grateful for the opportunity that I had over 20 years ago with a loan to get me started. I want to be able to pay that forward and give a little assistance for entrepreneurs in the food/farming/wine industry that are passionate about what they do. We offer small grants (bigger ones in the future) for qualified individuals.

Simmer + Sauce: You have a reputation for being approachable and helpful to those in the culinary field. What advice can you offer a young woman wanting to start her own restaurant?

Sondra Bernstein: Practice in another person’s restaurant. I am delighted to hire managers that want to have their own place one day. This gives them a chance to see if they are cut out for the work. I suggest that they find out everything you need to know and make sure it is something you want to do. Know that weekends, holidays … will be at work, long hard hours and for that to change you need to plan ahead as you grow. I suggest not going to culinary school until after you have worked in a restaurant for a few years.

Simmer + Sauce: With all of your professional accomplishments, is there something you have not yet done that you would still like to?

Sondra Bernstein: Yes – learn how to have balance in my life.

Simmer + Sauce: Food-wise, what is your guilty pleasure?

Sondra Bernstein:Tapioca pudding and peanut butter (but not together). 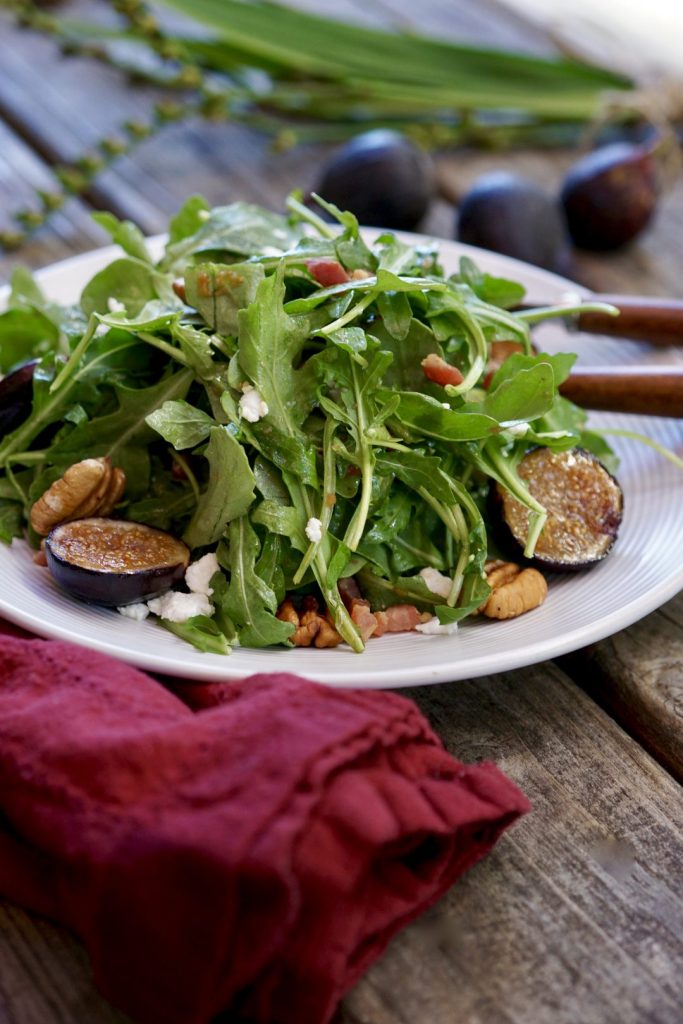 With a plethora of amazing recipes to share, Bernstein offered her iconic Grilled Fig & Arugula Salad that has been on the girl + the fig menu since 1997. This is one of my favorite salads of all time, simple and elegant, with a rich sweet-tangy port reduction dressing that is out of this world delicious.  This is lovely Fall/Winter salad that works for a casual weekday dinner with family or a large holiday celebration. Both sweet and tangy, this classic salad is one for your recipe arsenal. 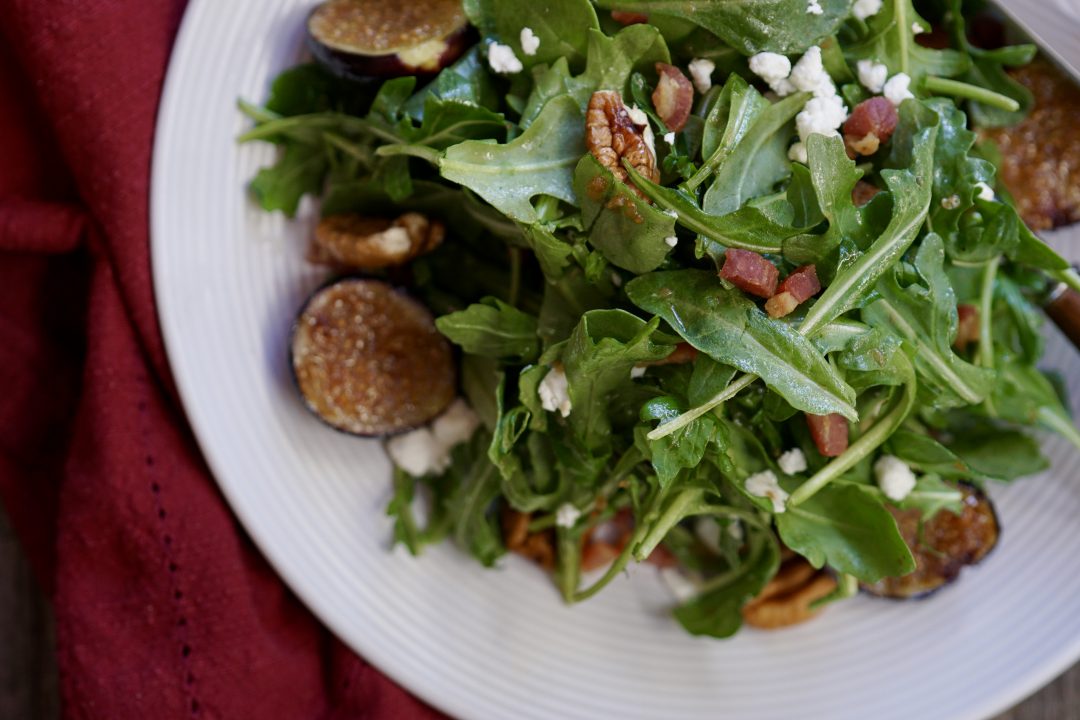 I would like to thank Sondra Bernstein for allowing me to feature her in my Changemaker series. I have admired Bernstein for many years and was truly blown away by her kindness, approachability and her underlying desire to help others–a rarity in a deeply competitive industry. Bernstein’s ability to remain humble and grounded throughout her success is both admirable and inspiring, we need more like her in this world.