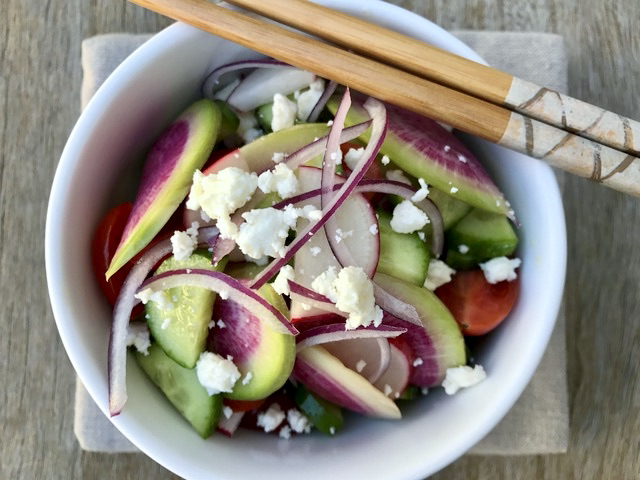 If you are unfamiliar, watermelon radishes are supremely beautiful. Their deep pink/magenta color is eye-catching and adds a real pop to any ordinary salad. Watermelon radishes are actually considered a heirloom Chinese Daikon radish and a member of the mustard family (along with arugula, broccoli and turnips–who knew!). Typically, watermelon radishes are available during the spring and fall, since they are a cool season crop. Overly warm temperatures can affect the radish’s mild flavor, turning it rather bitter–I learned this the hard way.

I was first introduced to a watermelon radish when it appeared on a brine-pickled vegetable board my husband and I ordered at Nick Balla and Cortney Burns’ well-know (but now closed) Bar Tartine in San Francisco. Since then, I have noticed its popularity and availability has increased. Its flesh is tender yet crisp, and its flavor is mild, with a slight peppery note. Depending on when it is harvested, watermelon radishes can vary in size from a golf ball to a baseball. This lesser-known radish can be eaten fresh (which is what I prefer) or cooked, and it goes well with various other vegetables, such as fennel, apple, cucumbers, mild greens and soft cheeses like Feta and chèvre.

Both my husband and I are big salad eaters. We eat them almost daily. I am however, somewhat picky about my salads, I like them interesting and I like them to look beautiful. A nice presentation is important. This was further engrained in me during culinary school, when I had to log countless hours carving vegetables into very precise shapes and sizes.

I came up with this easy little salad for my husband, who has always been a radish lover. One of the best salads he ever had was also at Bar Tartine. It consisted of fresh radishes, homemade sweet cream butter and flake salt. I actually thought he was crazy when he ordered it; but the waitress was right, it was incredible. Sometimes, the most basic recipe really is the best. Despite trying, I could not recreate that perfect radish and butter salad, (primarily because I do not grow my own radishes, or make my own butter); but I created this one instead. I make this often: it’s easy and I typically have all of these ingredients in my refrigerator. My kids also like this salad. Well, they like everything except the radishes. That is still a work in progress. But they’ll get there eventually. 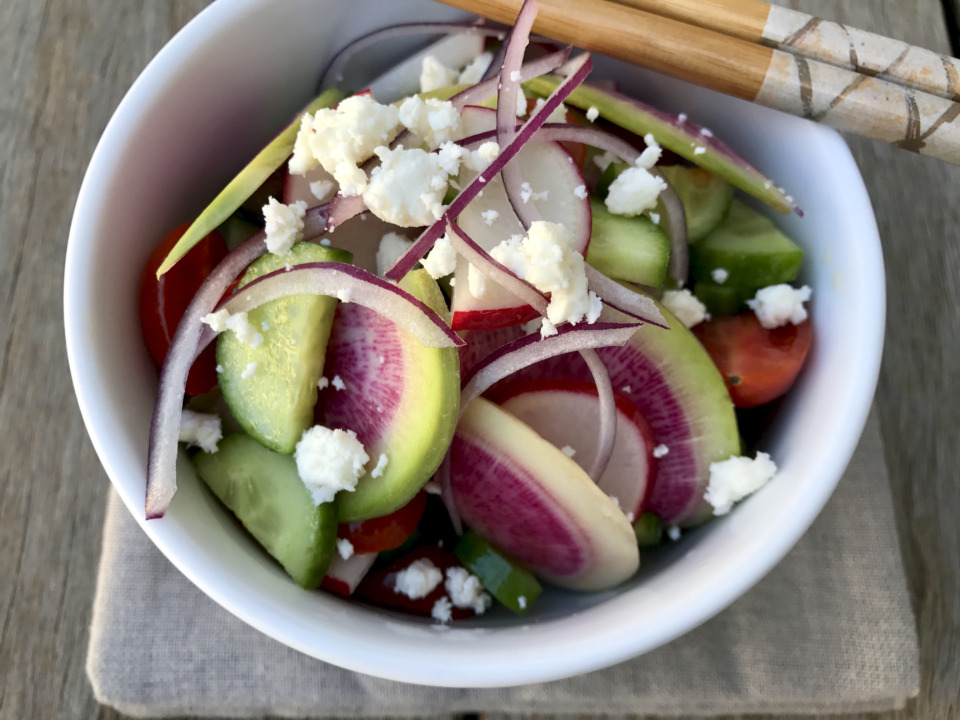 3 thoughts on “Who Knew A Radish Could Be So Good?”