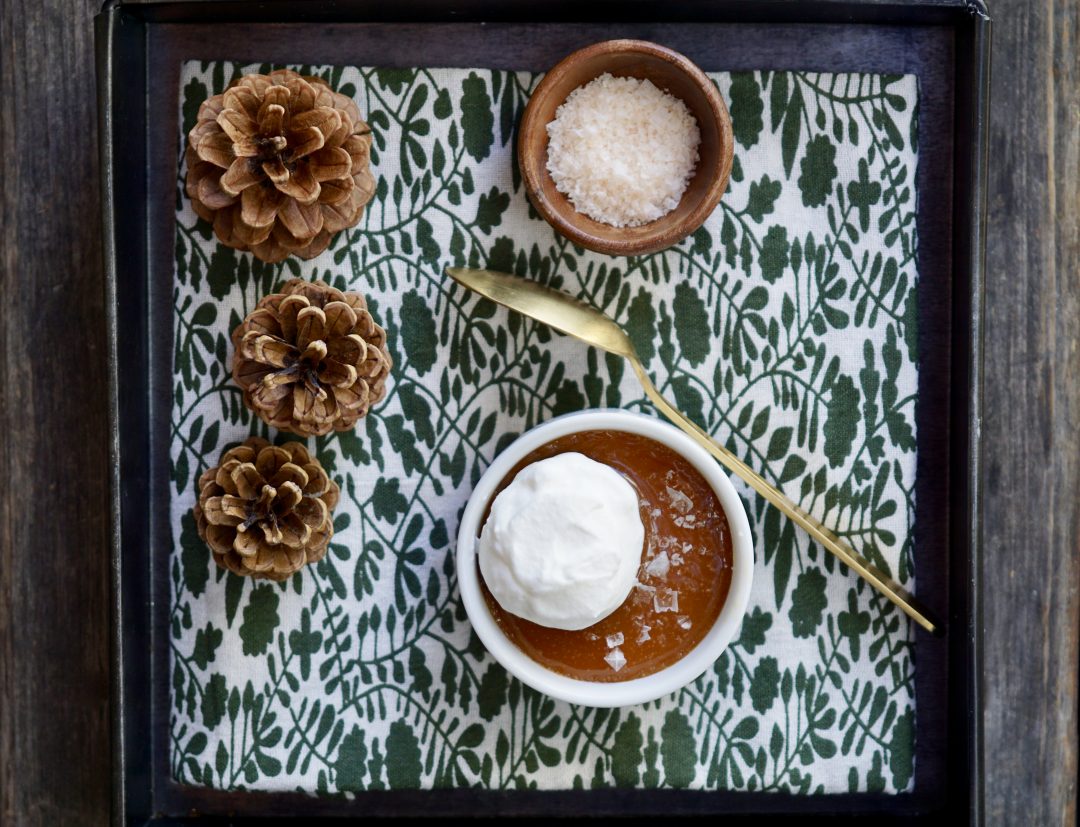 Pot de crème is a simple baked custard I have blogged about before.  Last time it was a classic chocolate pot de creme, an old favorite, this time I’m talking rich creamy butterscotch. Both of my pot de creme are delicious, but very different.

Butterscotch has always fascinated me. I have loved the flavor since I was a little kid. My grandfather used to give me butterscotch flavored sucking candies when I visited him.  I have a vivid memory of him somewhat magically pulling a butterscotch from his dress shirt pocket within seconds of me seeing him. Even in my twenties, he always seemed to have one tucked away just for me. 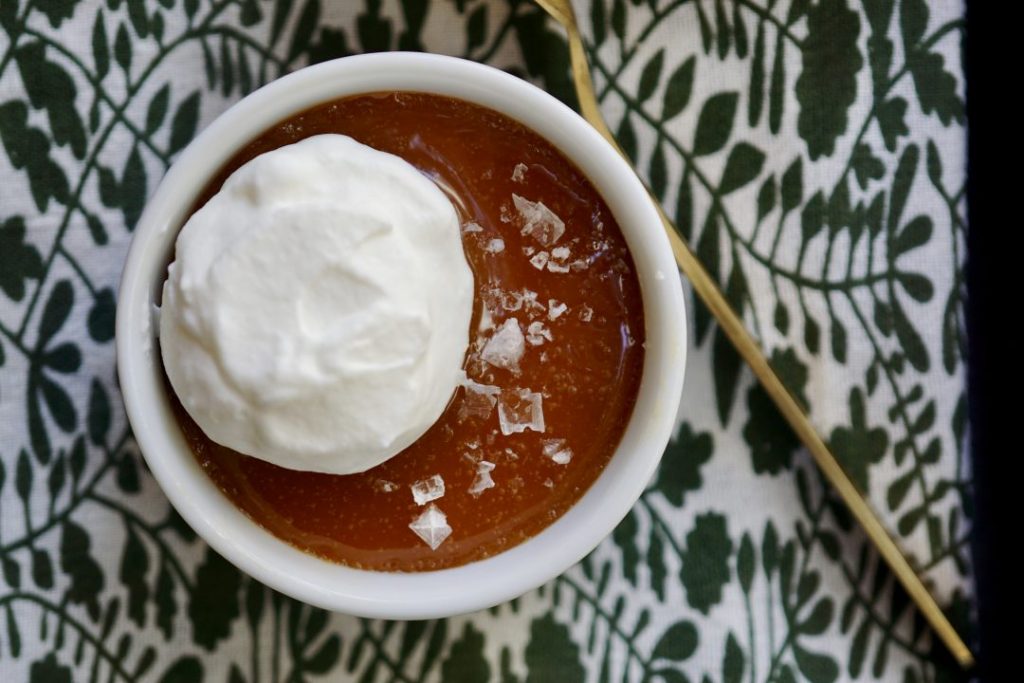 Butterscotch is by definition a confectionary, typically made with boiling sugar-water, butter and cream. Historically, there are many theories of its origins, but most believe it originated in Scotland. Another theory is that the word “scotch” was derived from the word “scorch”. Butterscotch was originally only a hard candy so the “scorch” suffix pertained to the method of cutting the butterscotch. Hard candy is difficult to break apart so it needs to be “scorched” (or scored) to make it easier to cut later.

The word “butterscotch” was first recorded in England around 1917 by Samuel Parkinson who was a Yorkshire candy maker. The Boyer Brothers (of the Boyer Candy Company) are the ones who introduced butterscotch as a coating and used it on their popular Smoothie Cup candy, which is a crunchy peanut butter and butterscotch cup combination. 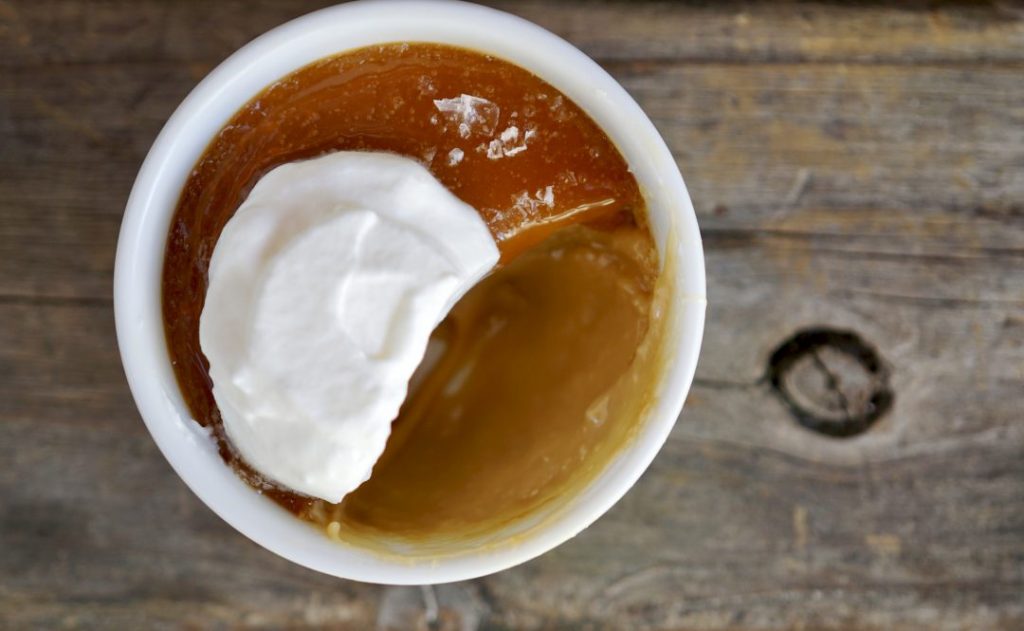 That aside, people often ask what is the actual difference between butterscotch and caramel?  Good question. Both are confections made with melted sugar. The difference is they use different types of sugars. Caramel uses white sugar, typically with heavy cream, butter and vanilla. To make butterscotch you use brown sugar and typically no vanilla. Toffee, similar to both caramel and butterscotch, also has the same ingredients, but is cooked longer, to what is known as the “hard-crack stage”.

So now you have the history and background on butterscotch, the question is are you a fan? I will say, don’t gage your love of butterscotch on the butterscotch flavored chips you can buy at the grocery store, that is not real butterscotch. The butterscotch used in this recipe is mild, real-deal butterscotch. As far as desserts go, this is a great make-ahead dessert perhaps for Valentine’s Day this week. If you’re a custard fan open to anything other than chocolate, chances are, you’ll be pleased. Give it a shot, trust me, I think you’ll love it. 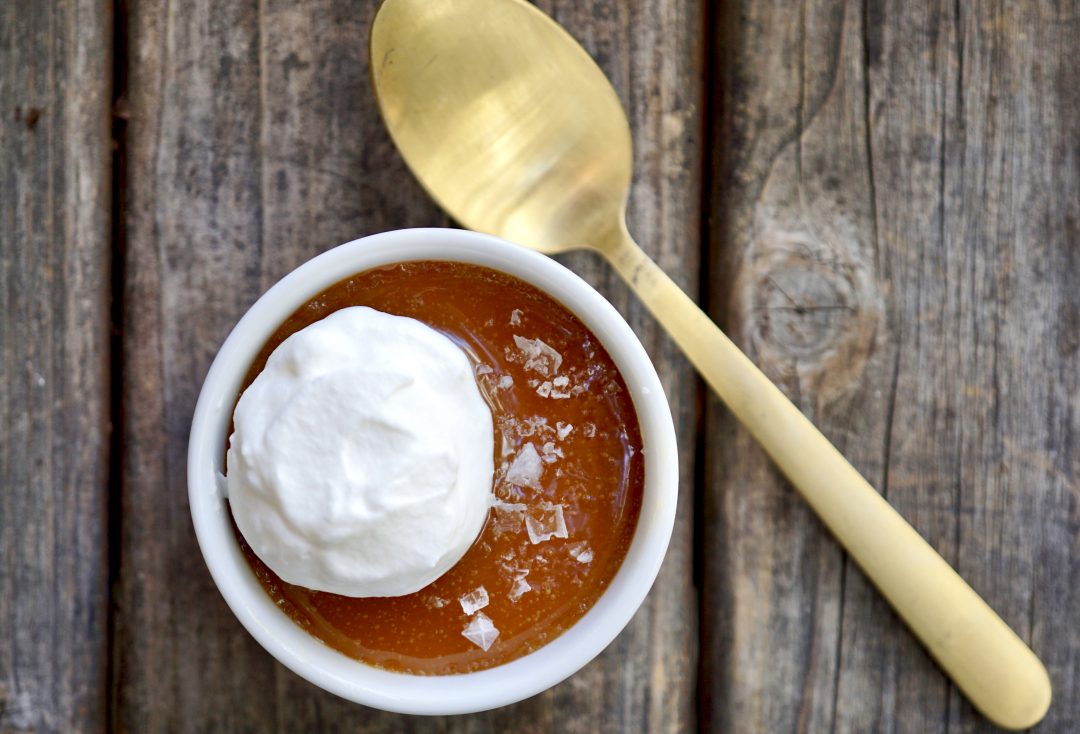