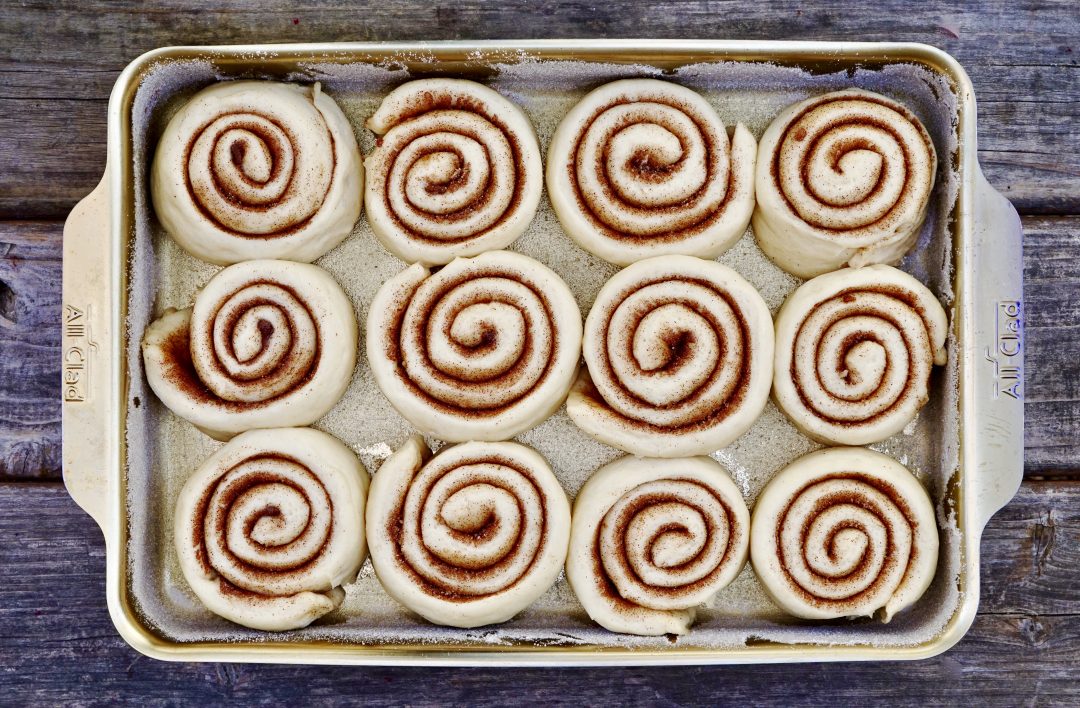 Cinnamon rolls are a true weakness of mine. I don’t have them often. But boy, if I could, I would. My earliest memory of cinnamon rolls relates to my parents’ divorce, when my sister and I were very young. My mom moved to NYC, my dad Arizona. My sister and I traveled between the two for vacations and holidays. There were pluses and minuses to doing this. It was a different time, travel was a bit more pleasant and kids traveling alone seemed easier and safer. I have fond memories of many such trips where my sister and I were treated like special guests, often being moved up to first class, permitted to hang out with the captain in the cockpit and getting lots of treats like ice cream sundaes and warm chocolate chip cookies. I liked to fly, so the travel itself never bothered me. Another plus were treats in the airports; those often included a warm cinnamon bun from the well-known chain Cinnabon. They were always delicious. Even in college when I traveled home from Wisconsin to NYC; I would nearly always obtain a Cinnabon during my quick connections in Chicago. I introduced my boys to cinnamon buns when they were young, and it did not take much convincing to get them interested. 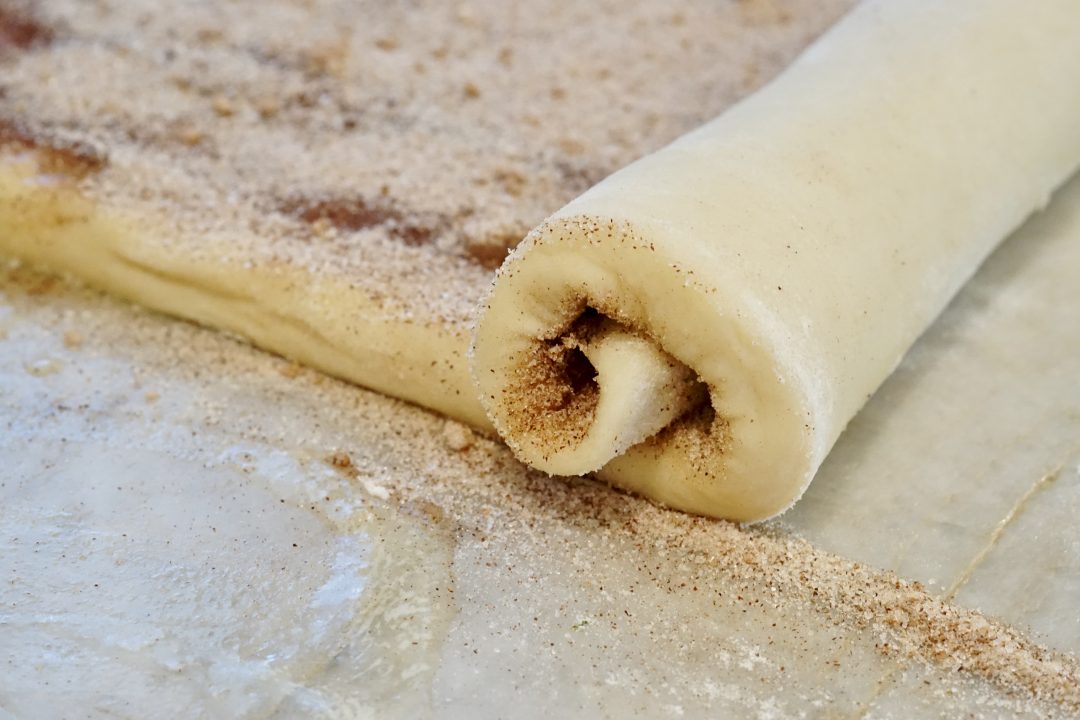 Despite my (and my kids’) love of these classic breakfast treats, I never made them from scratch until recently. Life changer. A warm homemade cinnamon roll with gooey frosting is delightful. Being realistic, this is a weekend cooking project: no reasonable person is going to whip these babies up before going to work or sending their kids to off to school. Even I am not that crazy. That said, when the weekend comes around, they are worth every minute they take to make. 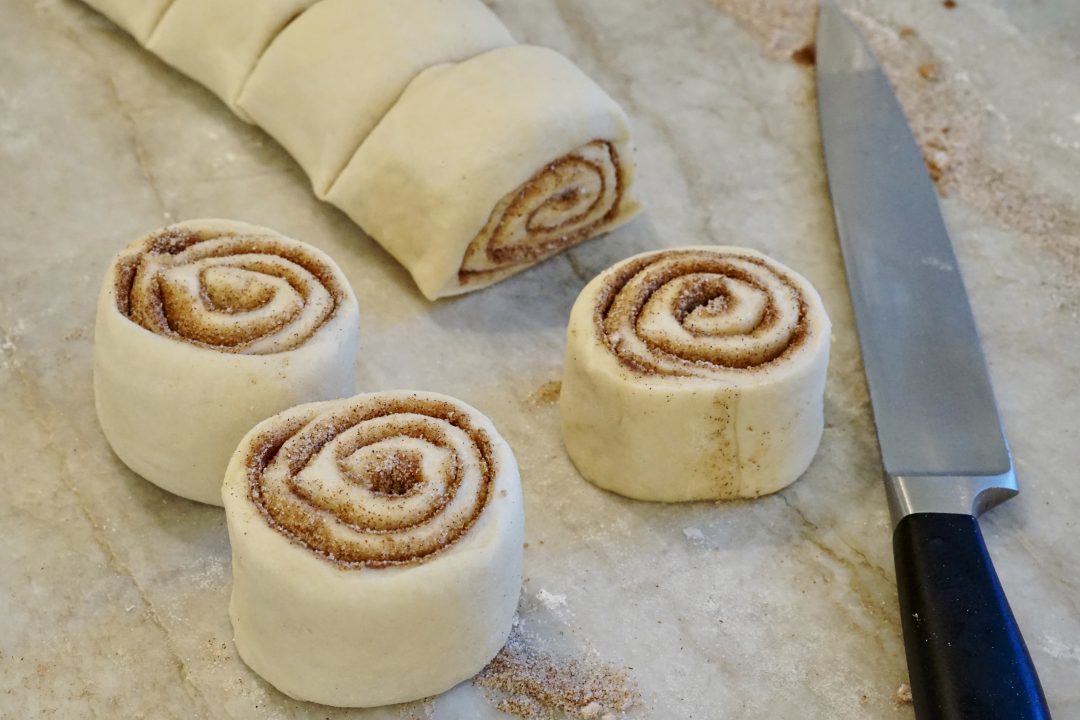 The yeast-based dough itself is not complicated. And if you use a KitchenAid (as I do) for almost everything, it’s quick. The dough does require a double rise, so that’s where these become a bit more time-consuming. But while that had always seemed daunting, it should not have been. The technique to make these is not a hard one: roll the dough flat, sprinkle with cinnamon and sugar, roll into a log and slice.

Cinnamon rolls, also called cinnamon buns, cinnamon swirl, cinnamon Danish, and cinnamon snail, is a sweet roll commonly eaten in Northern Europe and North America. Sweden is the presumed country of origin. The Swedish name for their version of this tasty treat is “kanelbullar,” which literally translates to “cinnamon bun“.  In Sweden, cinnamon rolls are considered a social institution. This beloved treat is often enjoyed during FIKA, a gathering with friends. In 1999 Sweden’s Home Baking Council (Hembakingsradet) declared October 4th as National Cinnamon Bun Day. 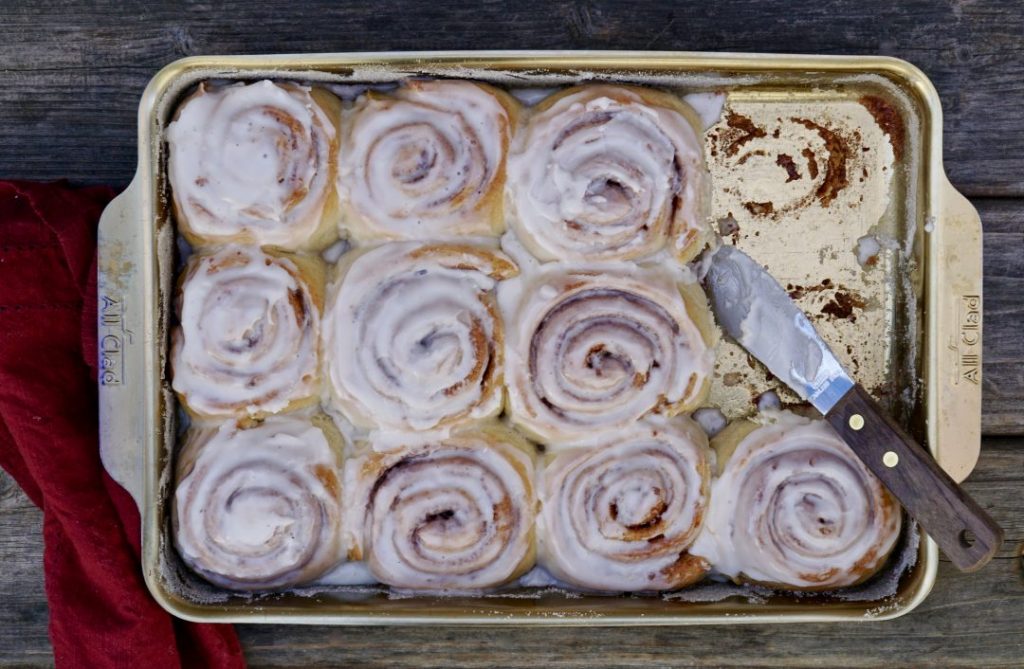 The trick to finishing cinnamon rolls is knowing just the right time to frost them. Slightly cooked but still warm enough that when you spread the sweet sugary glaze over them, it melts ever so slightly–turning the top surface white.  In doing so, you ensure the perfect balance between bun, cinnamon and rich glaze–and yes, if you’re going to indulge, this matters. 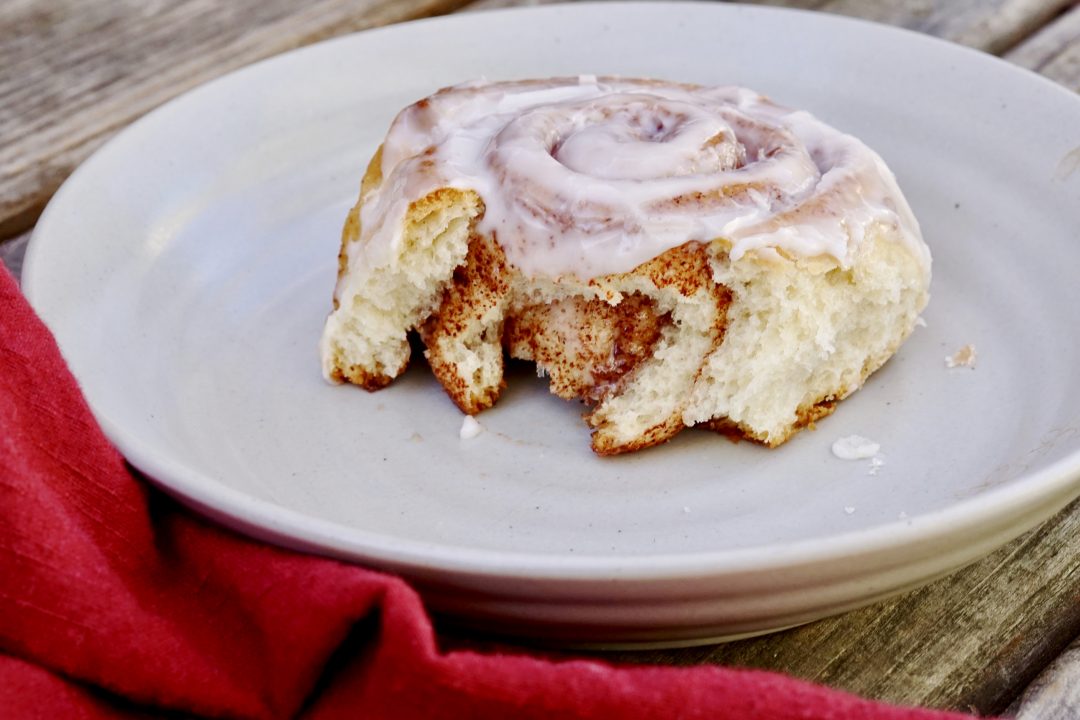