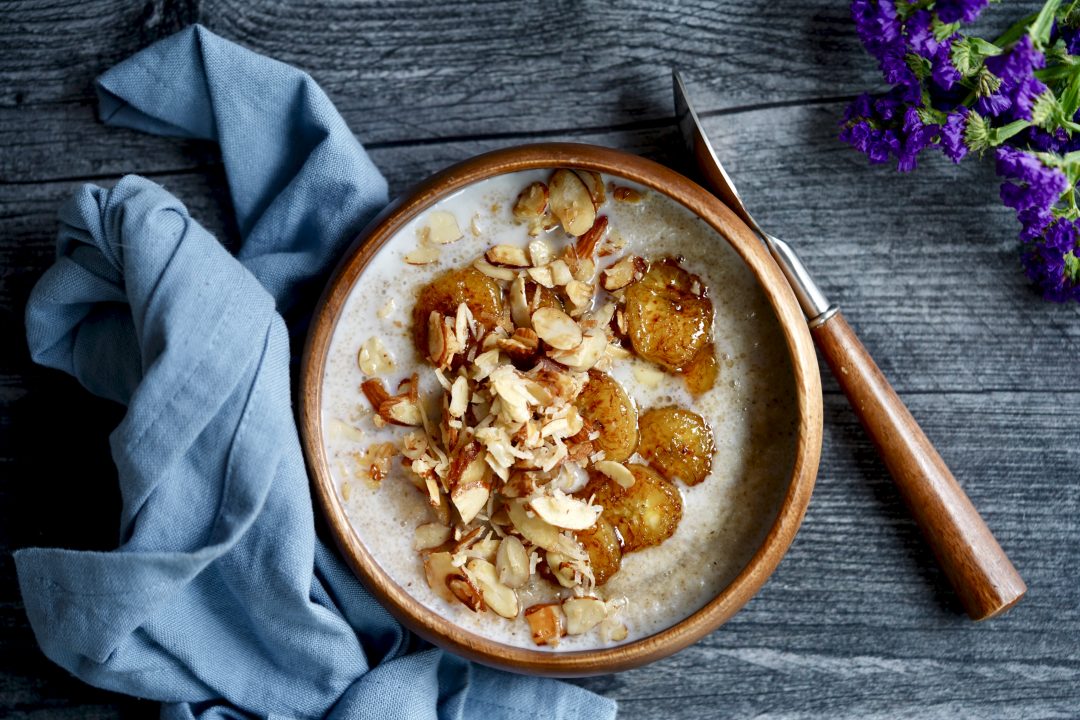 You could call this porridge, but I won’t. This is my creamy Fonio cereal with caramelized bananas. If that didn’t hook ok you, perhaps this will. I topped it with coconut-almonds clusters, brown sugar and agave nectar. Honesty, this may be the breakfast cereal of your dreams. I know it’s mine. Once you try this warm creamy Fonio cereal, you’ll never go back to cold cereal again. Earthy-flavored Fonio is full of nutrition, which makes it a perfect choice for a wholesome gluten- and oat-free breakfast. 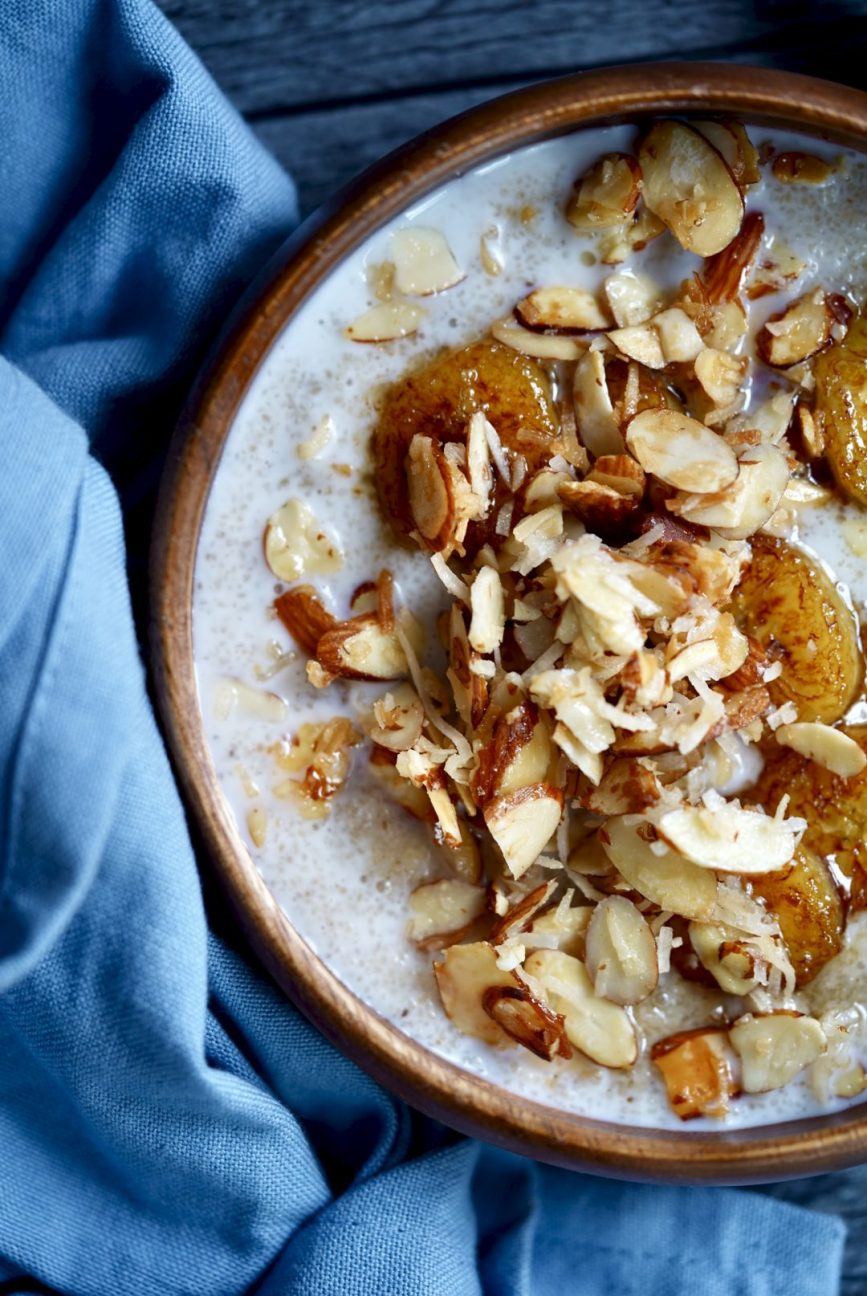 Fonio is an ancient Super-Grain that has been grown in West Africa for 5,000 years. However, recently Fonia has been making headlines and that’s because of it’s remarkable health benefits. I have heard Fonio described as “the grain that would defeat quinoa as king among foodies”. And as “the most nutritious grain you’ve probably never heard of”. Both, I believe, are true.

Not only is Fonio gluten-free, it’s also nutrient-rich. This quick cooking grain derives from the millet family. It has a light nutty flavor and is fluffy couscous-like texture. Fonio is rich in iron and amino acids and a great source of zinc, phosphorus and vitamins B1 and B3. And best part, it cooks up in just 5 minutes. You can use Fonio as an alternative to rice, couscous, quinoa or polenta in just about any recipe. 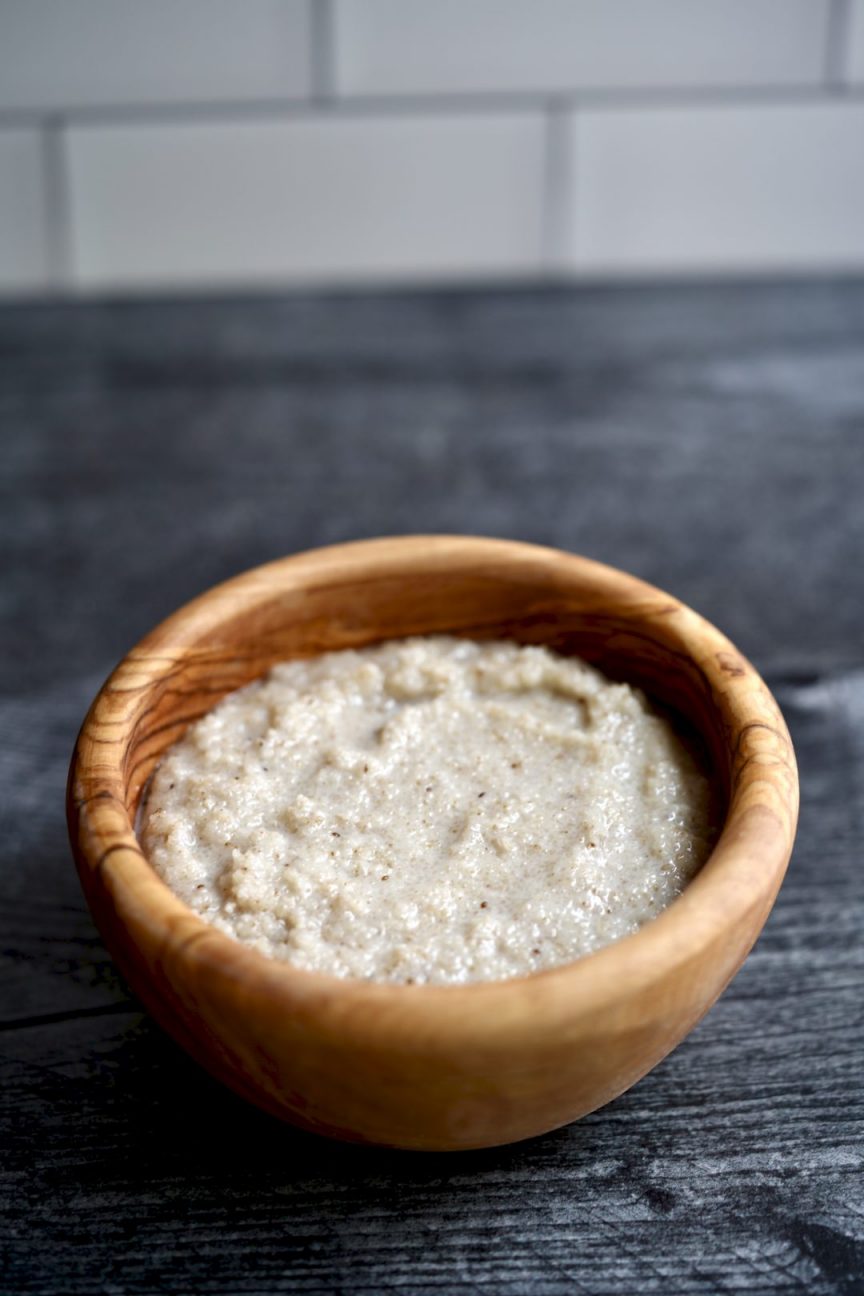 Another bonus, Fonio is incredibly easy to grow. So easy in-fact, it has been nicknamed the “lazy farmer’s crop”.  Spread the seeds on a field barely plowed after a rain, and it grows in just 6-8 weeks making this grain quickly available for consumption.

This plant adapts well to all types of soils, requires only a little water, and no chemicals, to grow. And since Fonio requires no additional processing, it’s considered a naturally organic cereal by definition. Harvesting Fonia also provides life-changing income to women farmers in the African Sahel and help restores degraded soil. A grain that can improve your health and create sustainable livelihoods, is deserving of it’s “super” food title if you ask me. 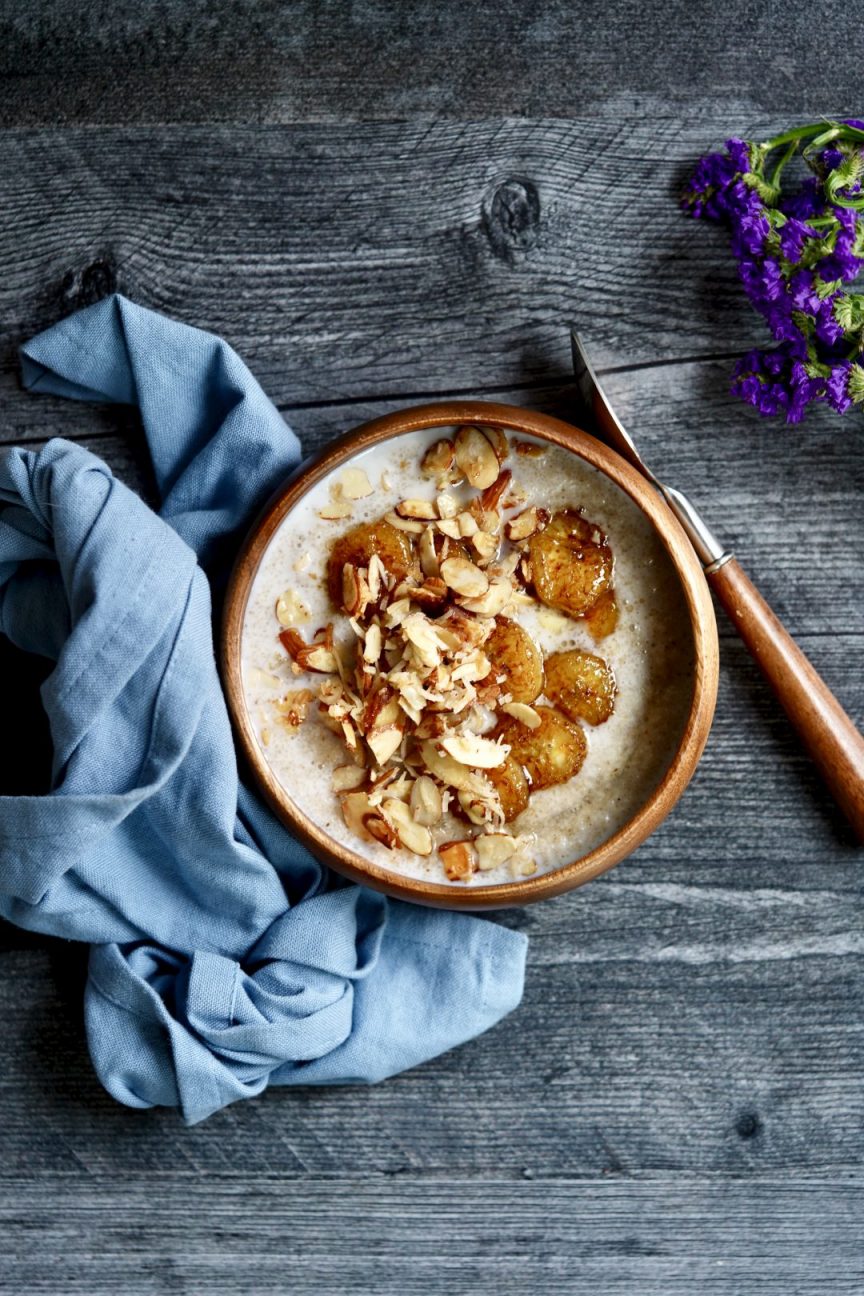 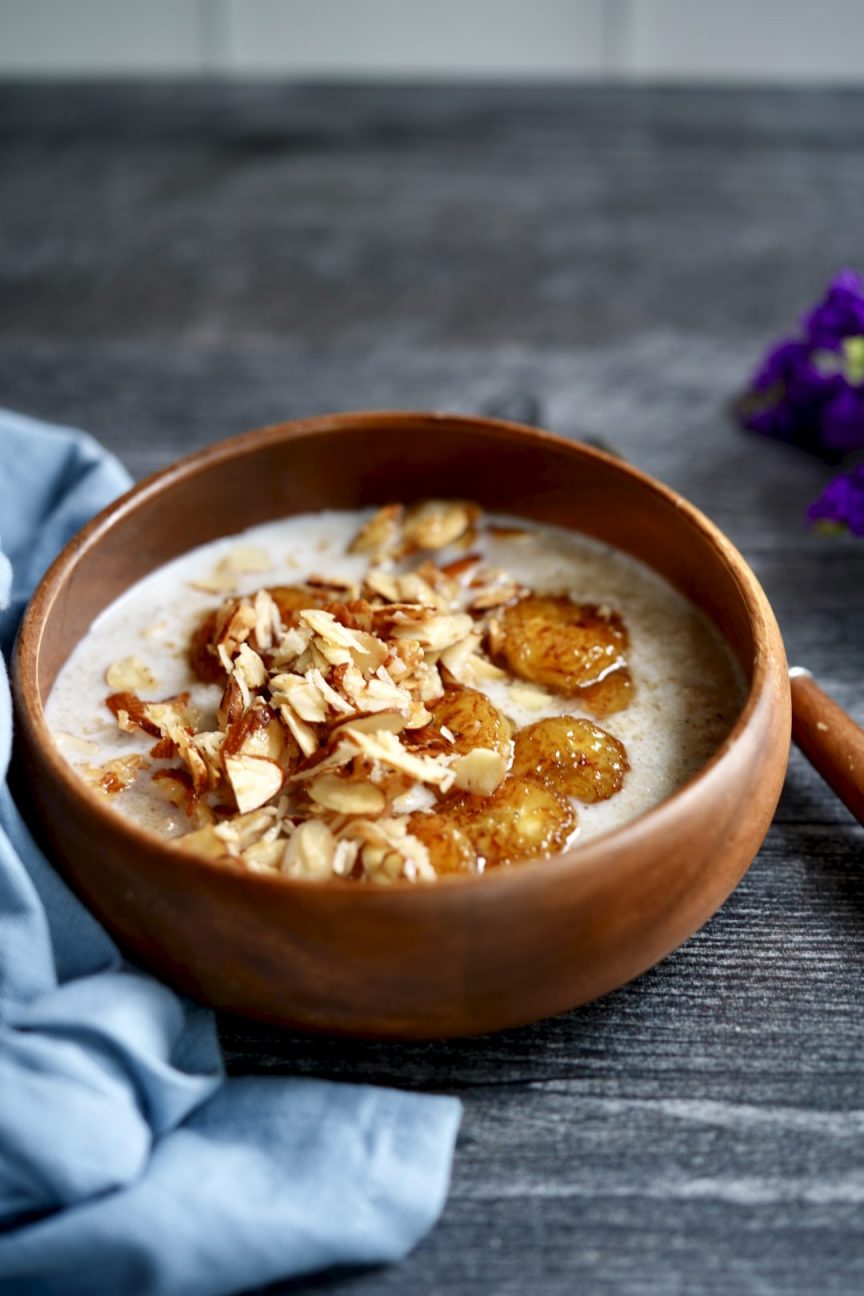 Like couscous, Fonio is suitable for both sweet and savory preparations. So, if my creamy fonio with caramelized bananas is not for you, go ahead and get creative, swap in Fonio in your next grain recipe and let me know your thoughts, I always love to hear them. 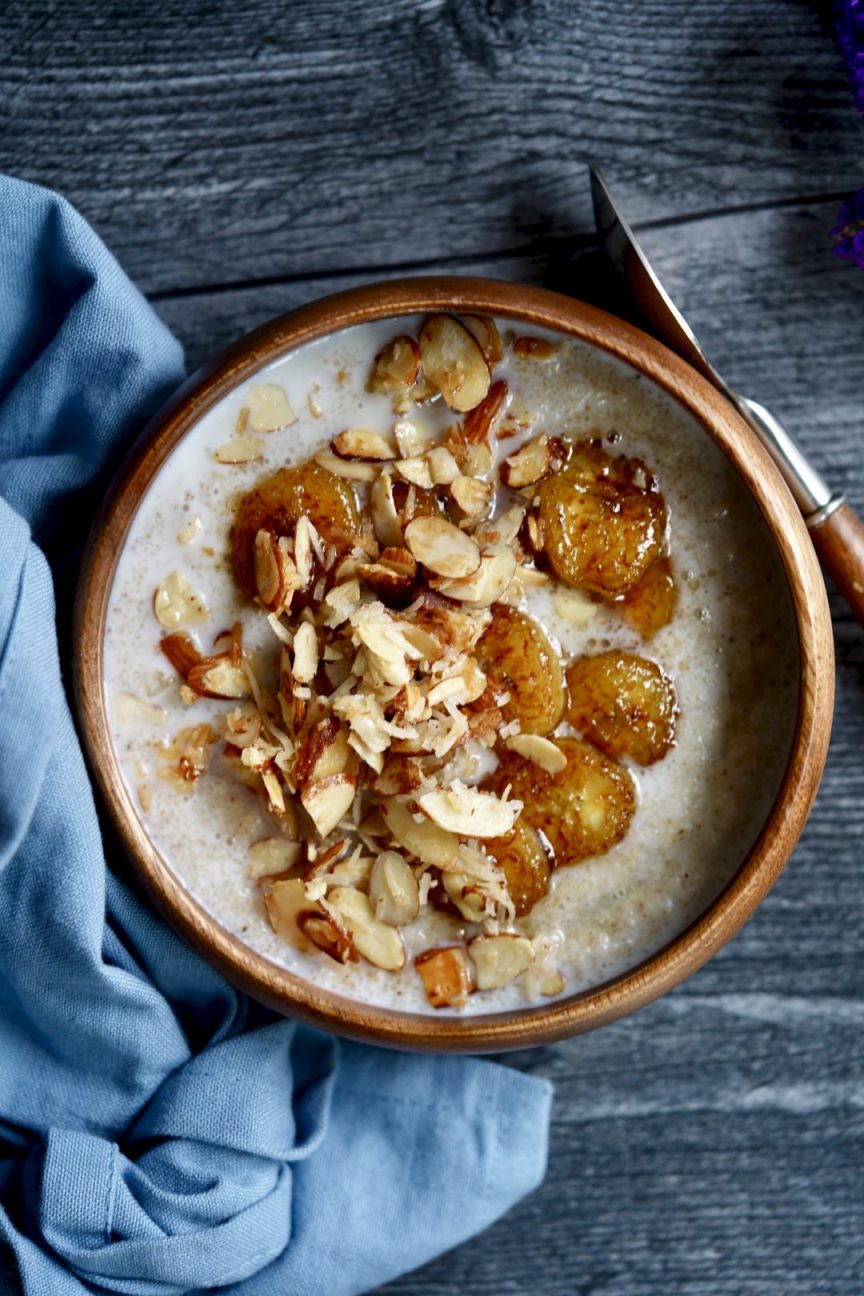