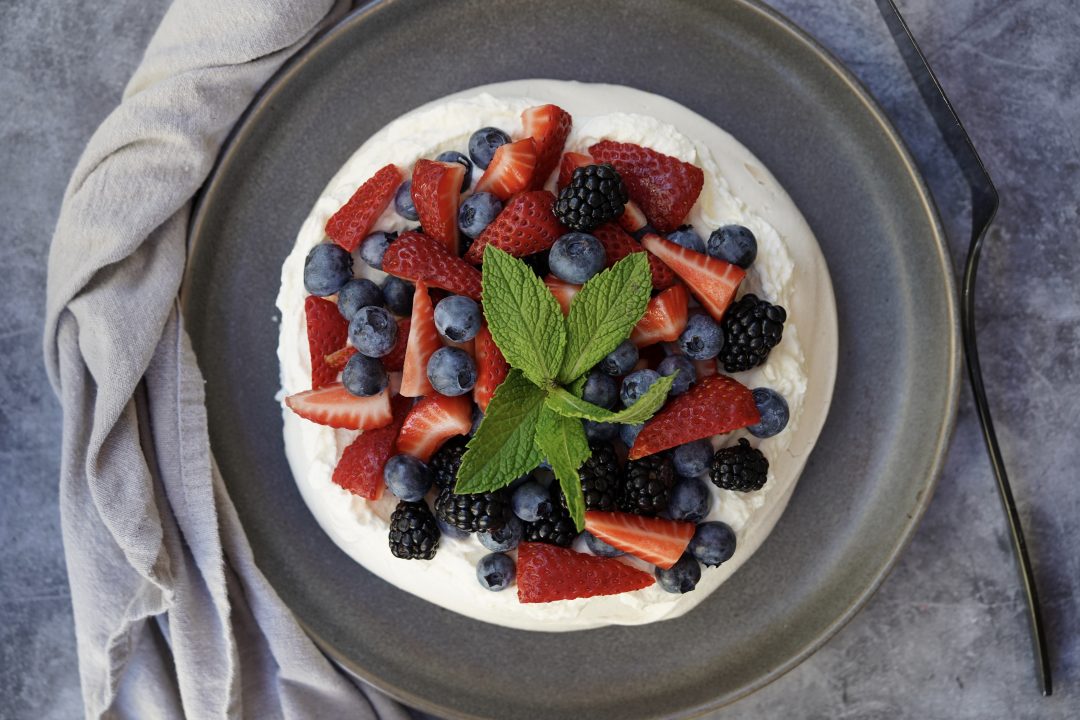 This stunning Pavlova with mixed berries is my new favorite summer dessert. And, if you are in the states, and feeling patriotic, it happens to be a fantastic dessert for the fourth of July. To be honest, many people don’t actually know what a Pavlova as it’s often found in all sorts of different shapes and sizes.  A Pavlova is simply a meringue dessert, but with a delicate crisp crust and soft, light inside, usually topped with whipped cream and berries. This seasonal beauty, loaded with fresh berries, is gluten-free and easy to prepare, what’s not to love? 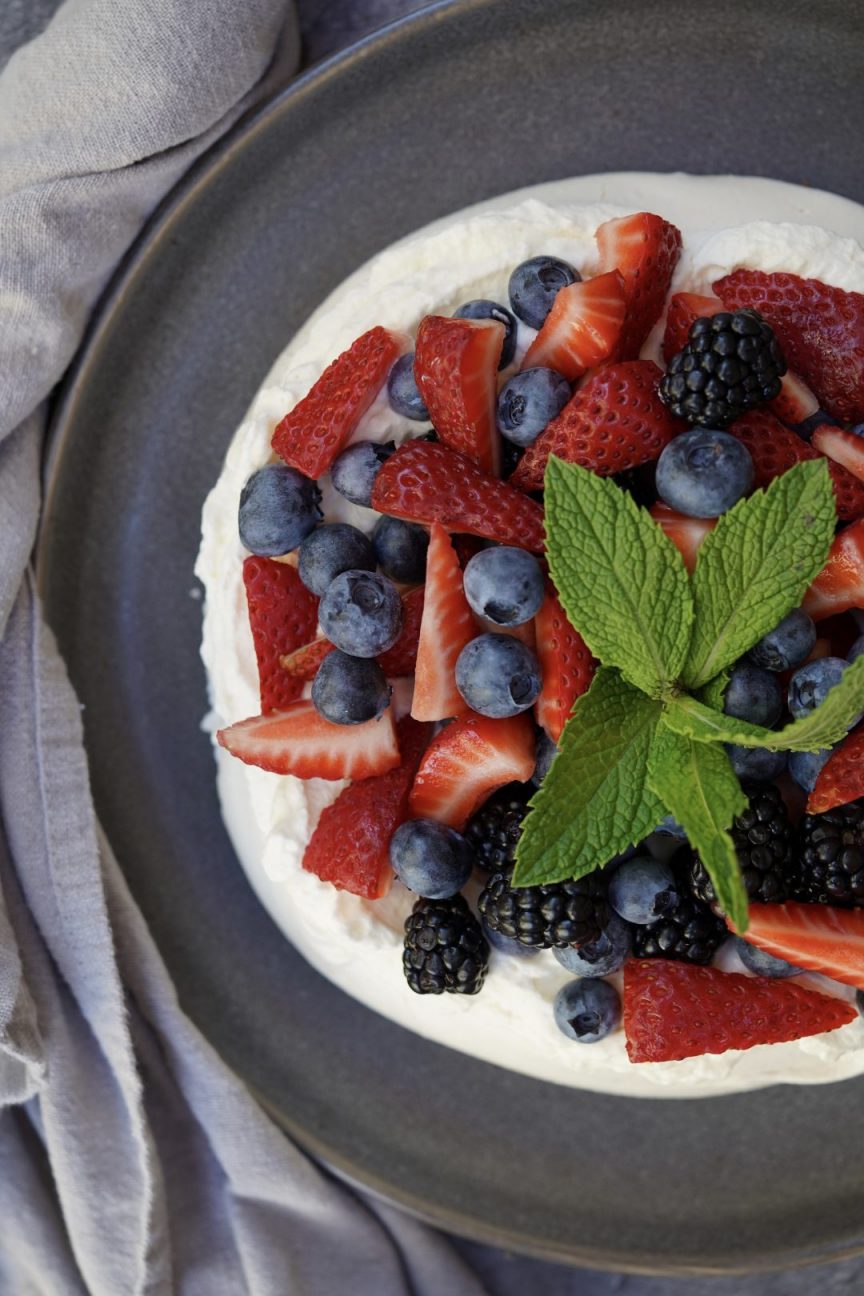 Where This Famous Dessert Got Its Name:

The late Russian ballerina, for whom the Pavlova dessert was named, is said to have been “ethereal, delicate and slightly controversial“. Her namesake, this simple confection, with a straightforward list of ingredients, results in a light and airy dessert, symbolic of the ballerina herself. But Pavlovas are not without its fair share of controversy themselves, as both New Zealand and Australia take credit for its invention and creation. 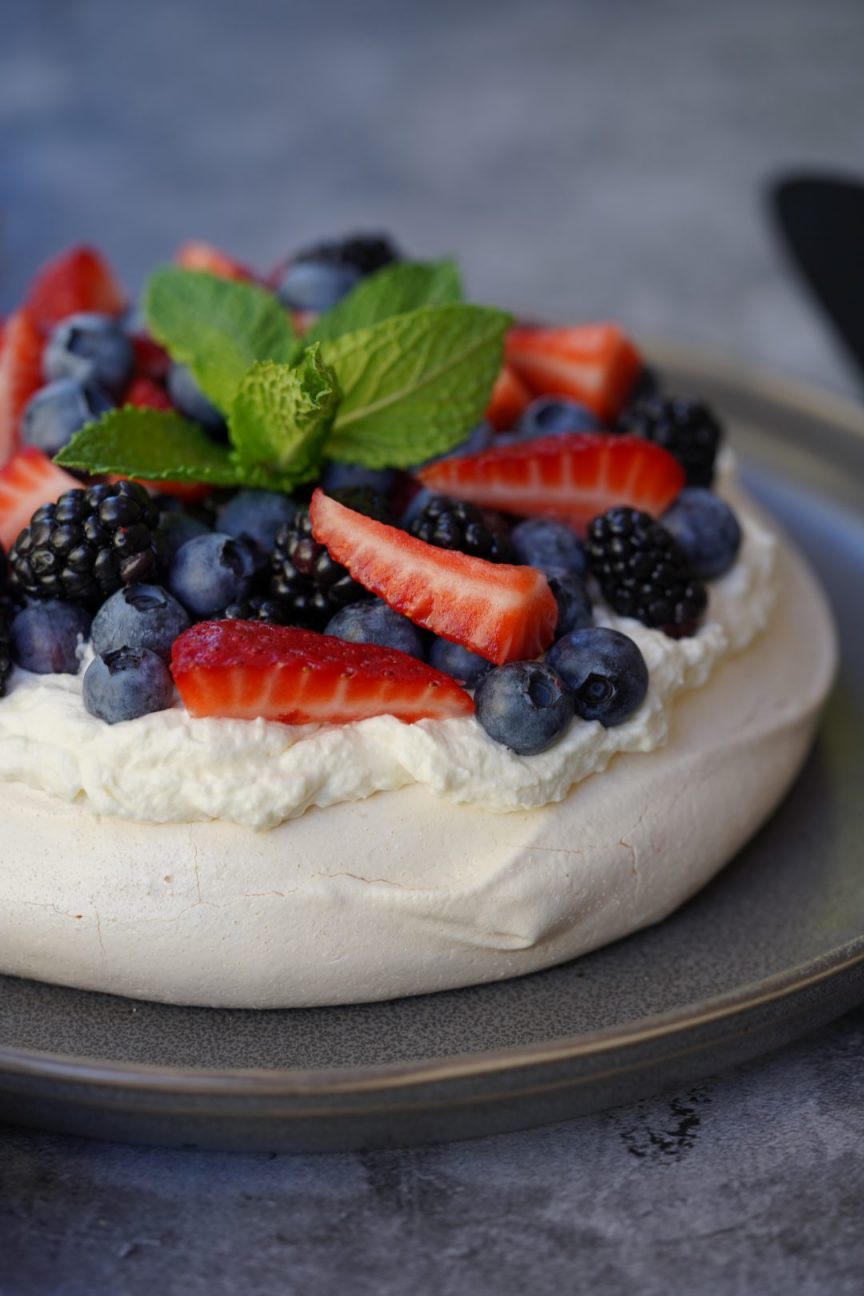 The dessert is believed to have been created in honor the dancer either during, or after, one of her tours to Australia and New Zealand in the early 1920s. The nationality of its creator has been a source of argument between the two nations for many ears. Pavlova is a popular dish and an important part of the national cuisine in both Australia and New Zealand. And this simple yet elegant recipe, is frequently served during celebratory and holiday meals in both countries. 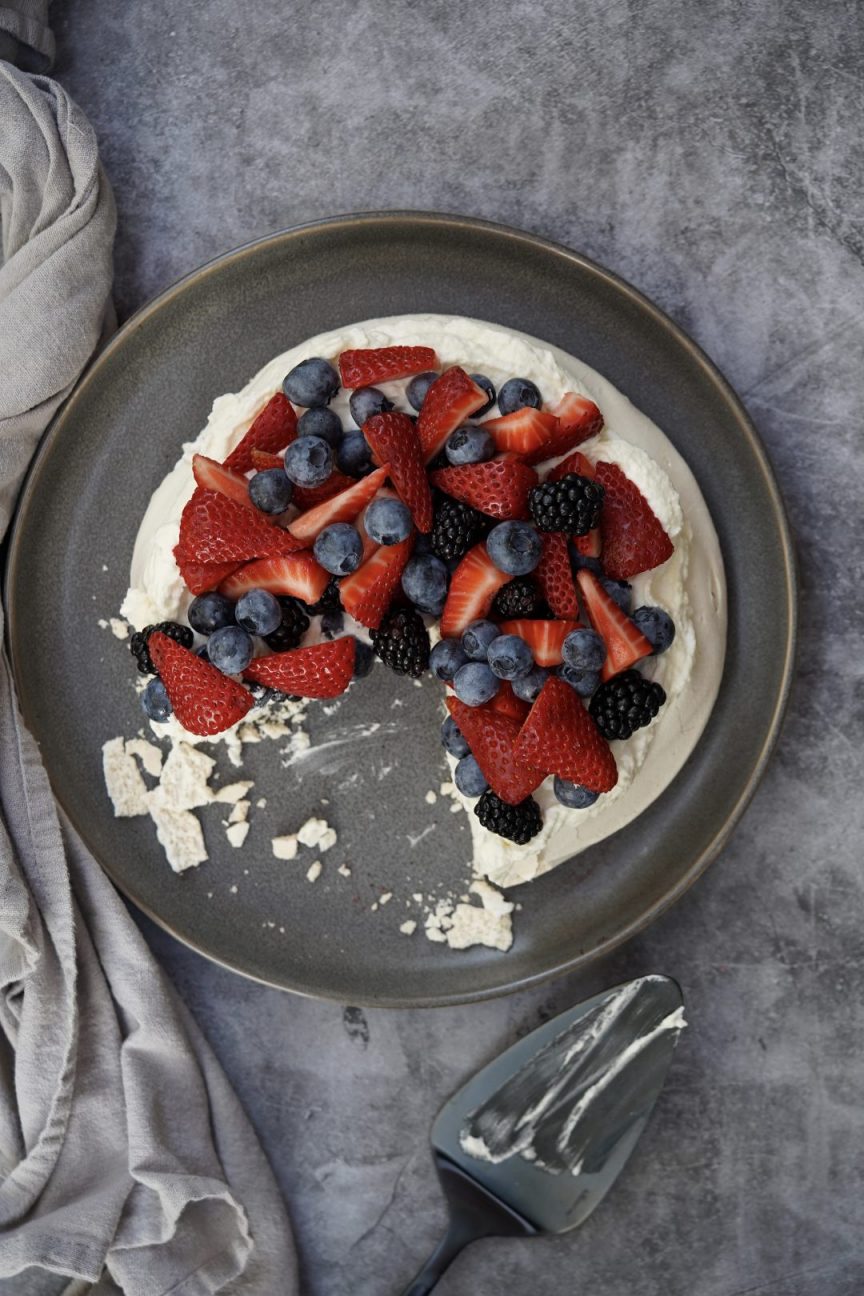 The Difference Between Meringue and a Pavlova:

To clarify, a meringue is a mixture of whisked egg whites and sugar and a pavlova is actually a type of meringue. And when made properly, Pavlovas have a signature marshmallow-like center. They have cornstarch included within mixture that helps give the middle its soft texture. Pavlovas are typically cooked at a higher temperature for a shorter time in contrast to other meringue type desserts. 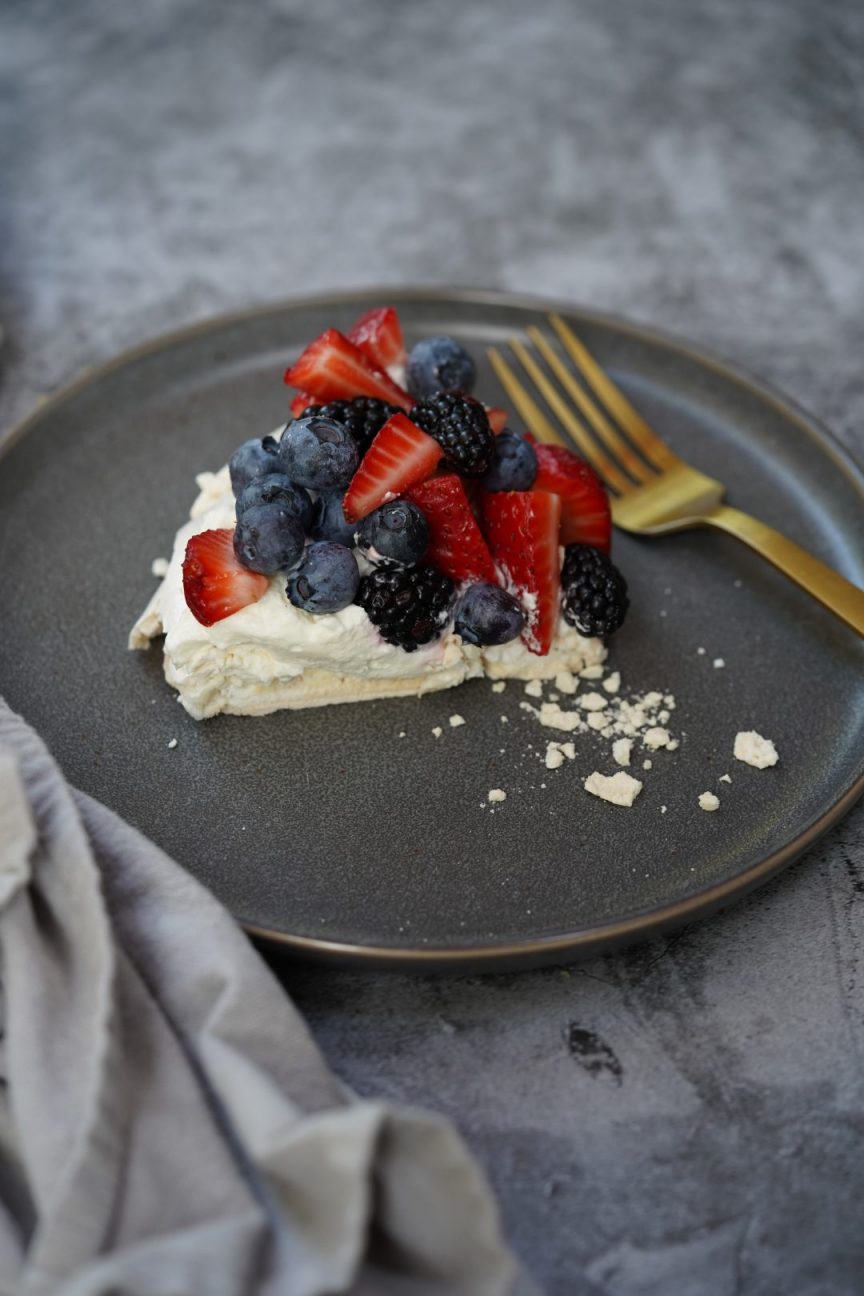 Here’s the great part, you can bake the Pavlova  the day before you plan to serve it, just hold off on assembling it. To store a cooked pavlova, place in an airtight container at room temperature. But do not refrigerate it, that will destroy it. A pavlova with mixed berries such as this one, should be assembled with the whipped cream and berries right before service to avoid it from becoming too soft. For holiday prep, my suggestion is to simply bake off your Pavlova in the morning and pull it all together later for an easy, hassle-free dessert, low-fat dessert everyone will love. 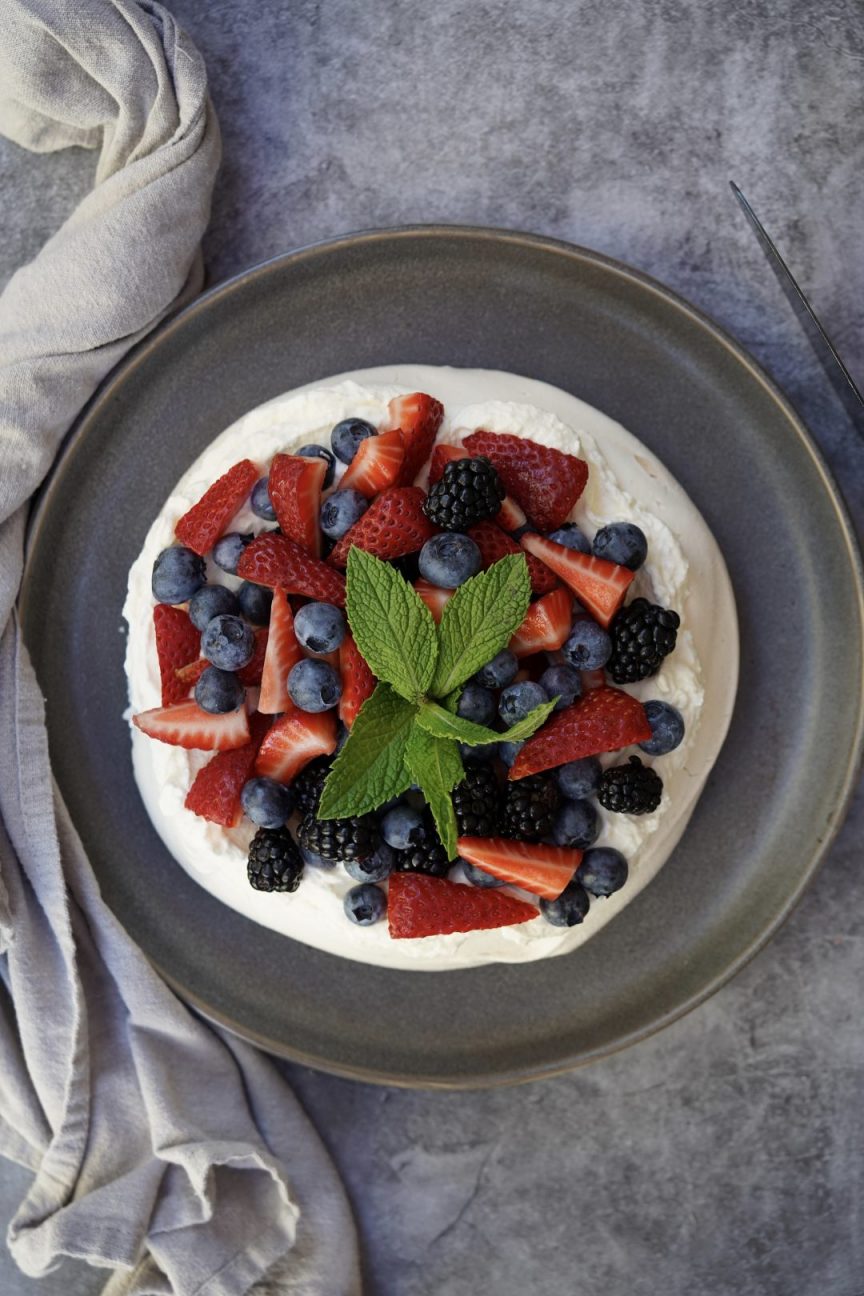