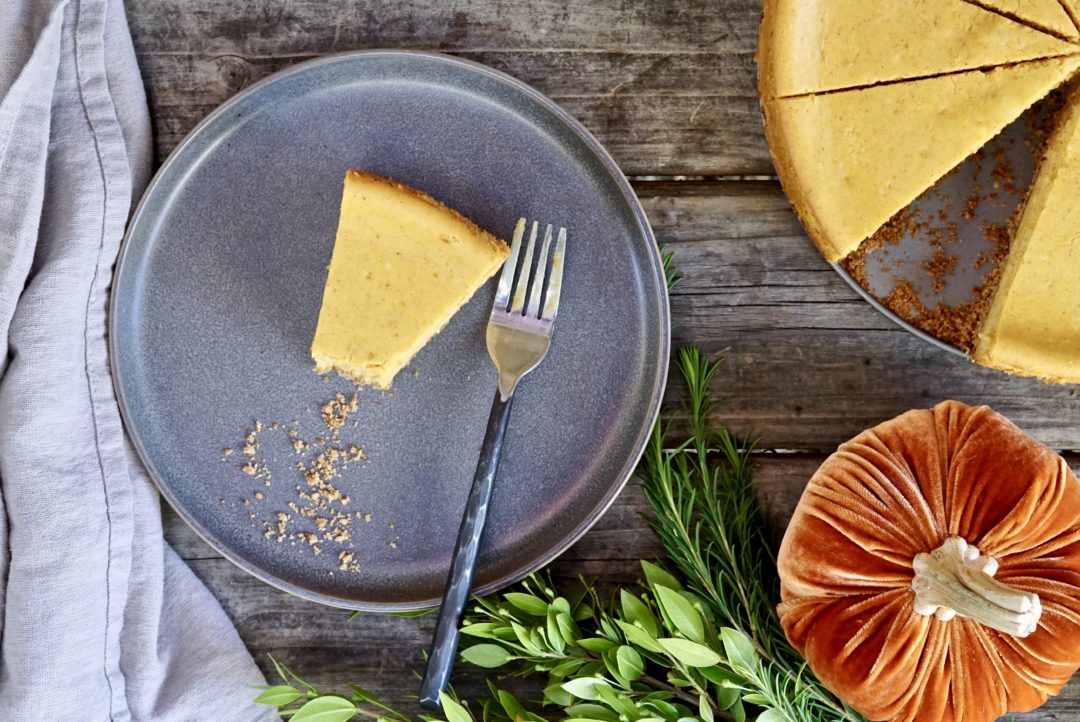 Yes, believe it or not, there is a National Pumpkin Cheesecake Day, it’s October 21st. It’s funny, I would have thought it was closer to Thanksgiving. The Fall baking season is in full swing, holiday meal planning has begun and pumpkin desserts are now more popular than ever. So naturally, a dessert combining two of American’s most favorite things (pumpkin and cheesecake) seemed appropriate.

Cheesecake is a sweet dessert that is a mixture of fresh soft cheese, cream cheese or even cottage cheese mixed with eggs and sugar on a crust commonly made from crushed graham crackers, crushed cookies, pastry or even sponge cake. My recipe has a slight twist, it uses graham crackers and my older son’s favorite snack food–pretzels for a sweet-salty touch.

Pumpkin is a versatile ingredient when it comes to cheesecake. It can be added to cheesecake recipes in several different ways. For example, it can be swirled throughout the custard base, mixed thoroughly within or even layered. 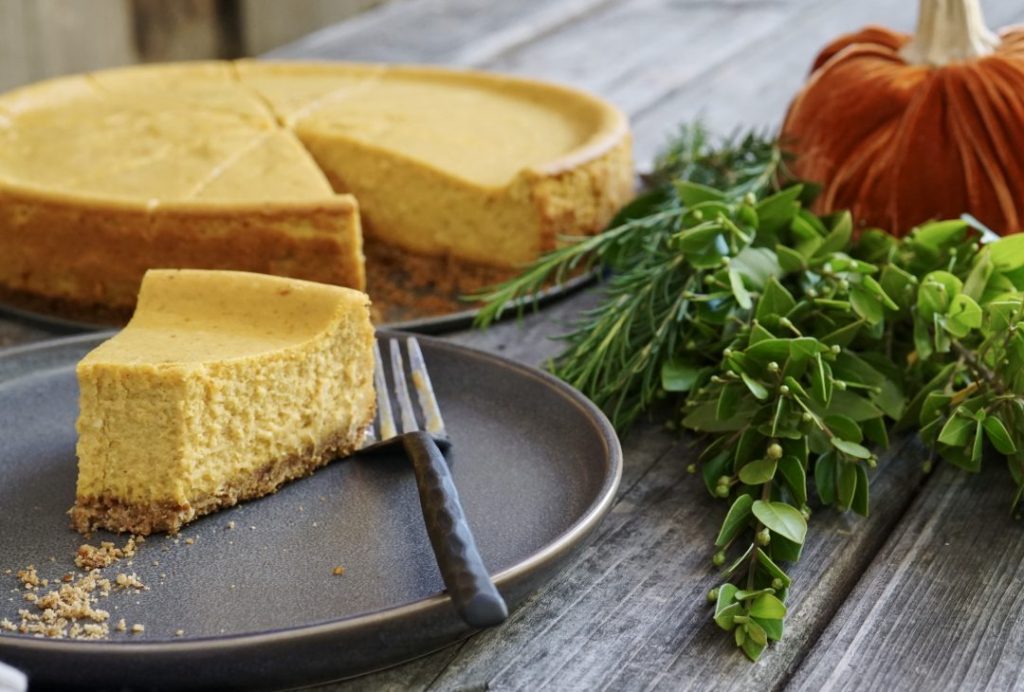 The Invention of Cream Cheese & Cheesecake:

Filling-wise, the cheesecake base itself is most often made of cream cheese, at least in the US. Cream cheese was invented in 1872 by American dairyman William Lawrence of Chester, New York, who accidentally stumbled on a method of producing cream cheese while trying to reproduce a French cheese called Neufchâtel.

Lawrence began distributing his cream cheese in foil wrappers under the name “Empire Cheese Company of South Edmeston, New York”, where he manufactured the product. Perhaps you know it better by the more well-known name Lawrence later settled on for his “non-Neufchâtel” cheese invention—”Philadelphia Brand Cream Cheese“.

In 1903, the Phoenix Cheese Company bought Lawrence’s business—and with it, the Philadelphia trademark. In 1928, the brand was bought by the Kraft Cheese Company. James L. Kraft is famous for inventing pasteurized cheese in 1912, which led to the development of pasteurized Philadelphia Brand cream cheese–currently the most popular cheese used for cheesecake making. Kraft Foods still owns and produces Philadelphia Cream Cheese today.

Cheesecake can be baked or not baked. Most baked cheesecakes use a custard base for filling comprised of milk, eggs, sugar, salt, and vanilla or other flavorings. The standard cheesecake recipe has the addition of cream cheese in it but like my pumpkin cheesecake recipe, there can be lots of variations in the type of crust, flavorings, variety of toppings that make each cheesecake unique.

To clarify, another misconception about cheesecake generally is that it always has to be sweet. Not true. Savory versions exist as well. In fact the French classic, quiche, is actually considered a savory cheesecake just with a slightly fancier name.

This pumpkin cheesecake recipe is a true holiday favorite of mine. The crust is a fantastic balance of both sweet and salty. My pumpkin custard is sweet but not overly so and while I love a great pumpkin dessert, sometimes less is more, besides, it’s not a pumpkin pie! This cheesecake recipe takes some advance prep work, but trust me, the end result is worth it, holiday or not. 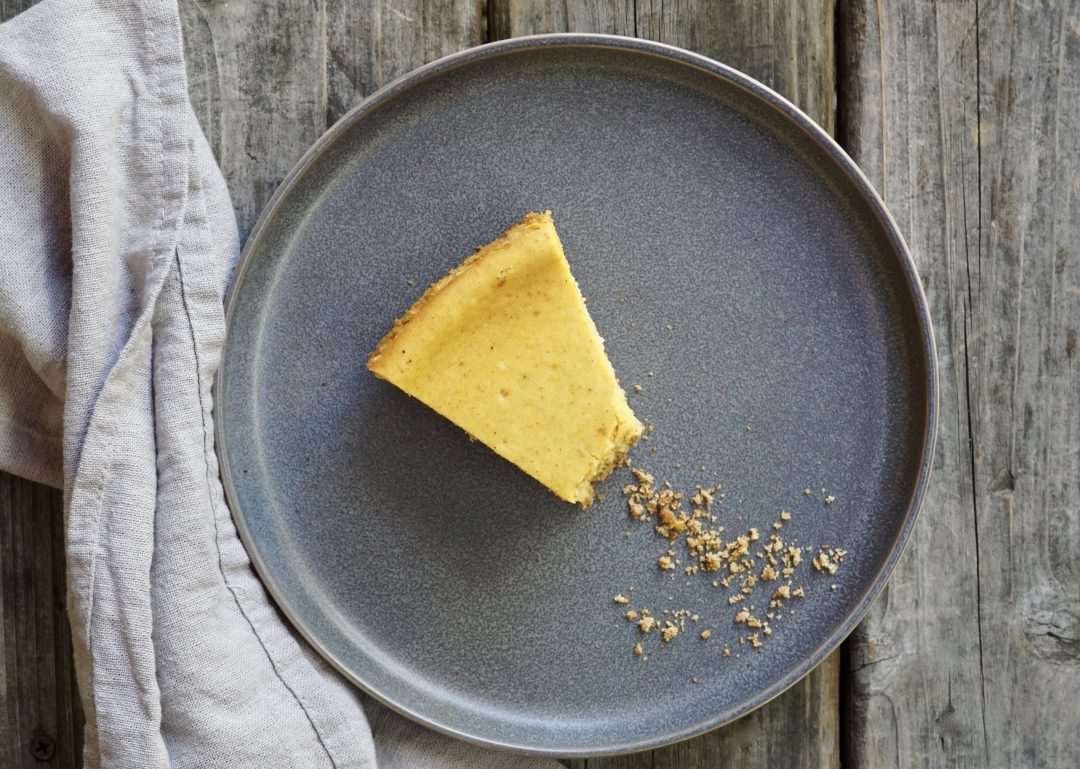