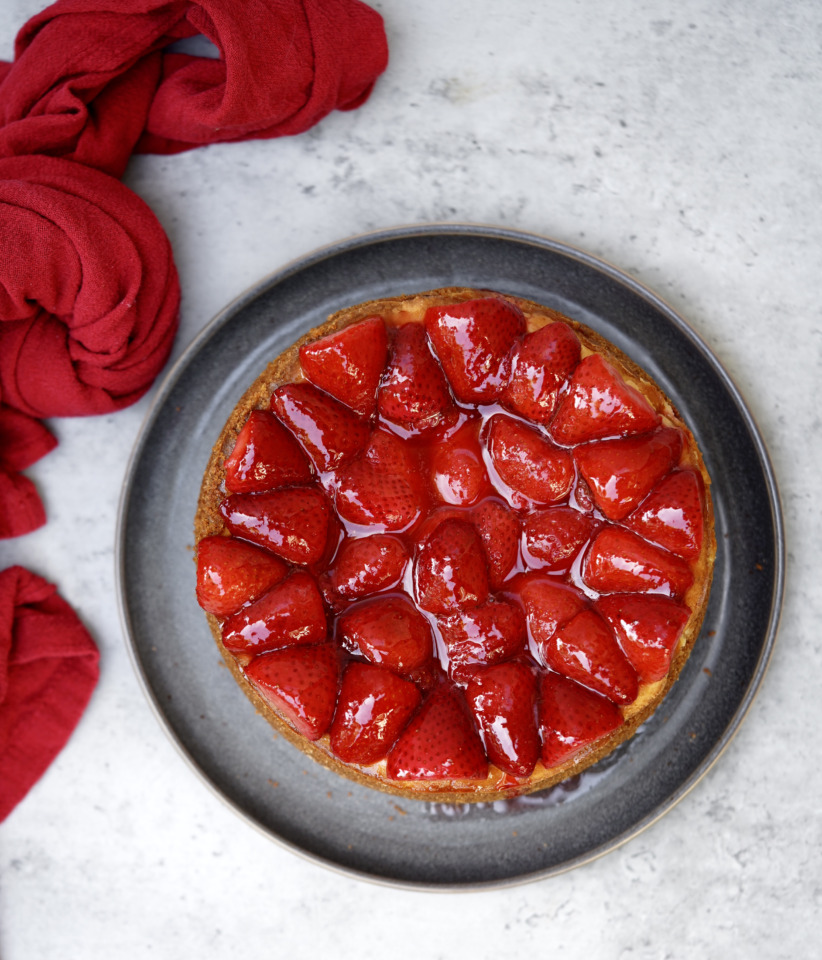 Strawberry cheesecake is the ultimate indulgence and something I find cathartic to make. Cheesecake travels the globe, and can be traced back 4,000 years ago to the fifth century BC, to ancient Greece and the island of Samos. At this time, cheesecake was made with patties of fresh cheese, flour and honey. These cakes were pounded smooth and baked on an earthenware griddle. Later, during the late medieval ages, cheesecake got transformed to include a pastry base and resembled a more traditional tart. This version of cheesecake had multiple variations, but unlike its earlier version, now included eggs and different flavoring agents.

This iconic dessert quickly made its way to the American colonies and was officially referenced in Martha Washington’s prized cookbook, which was a collection of handwritten recipes Martha was given by her mother-in-law at her wedding. Three different cheesecake recipes were included in this historical cookbook. One of these recipes was very similar to the crustless Ancient Greek version mentioned above. These early cheesecakes were flavored with rosewater and other simple spices. It was not until the 19th century that cheesecake began to feature more modern-day flavors, such as lemon and vanilla. 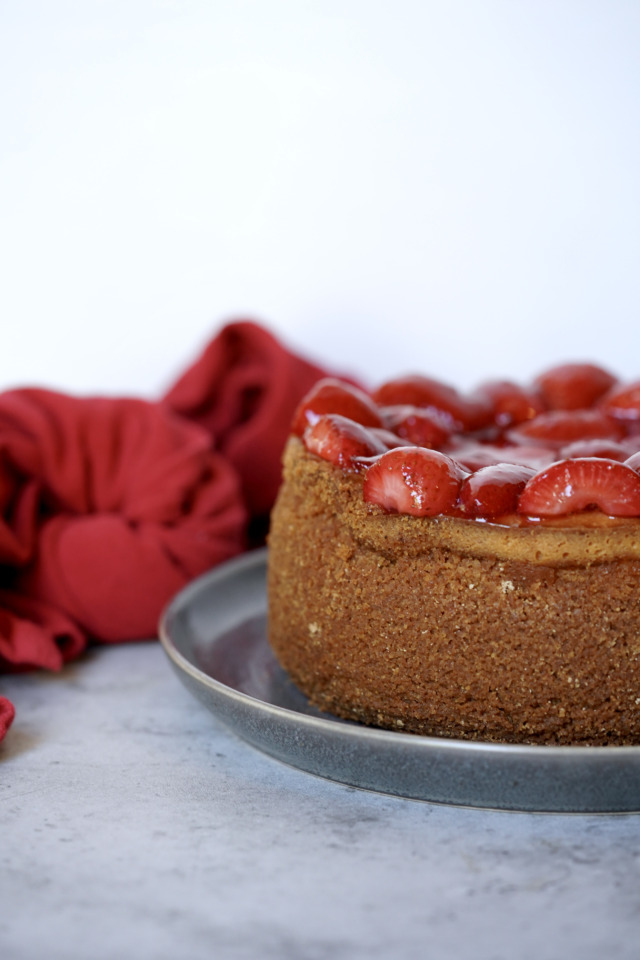 Cheesecake was Americanized in the early 1930s. Traditional curd cheese was replaced with cream cheese, creating a creamier, richer and more decadent dessert. This type of cheesecake became known as New York cheesecake. The addition of extra egg yolks to the cream cheese is what created this cakes signature smooth, velvety texture. New Yorkers fell hard for this reinvented cheesecake. Soon, virtually every establishment offered some variation of New York cheesecake on its menu.

What most don’t know, is that there are more than one style of cheesecake. When you break it down, cheesecake is merely a type of baked custard, consisting of soft cheese, eggs, sugar, and flavorings, set on a cookie or pastry base. But it’s the subtle differences of the cheese itself that affects both texture and taste, creating three very different styles of cheesecakes. 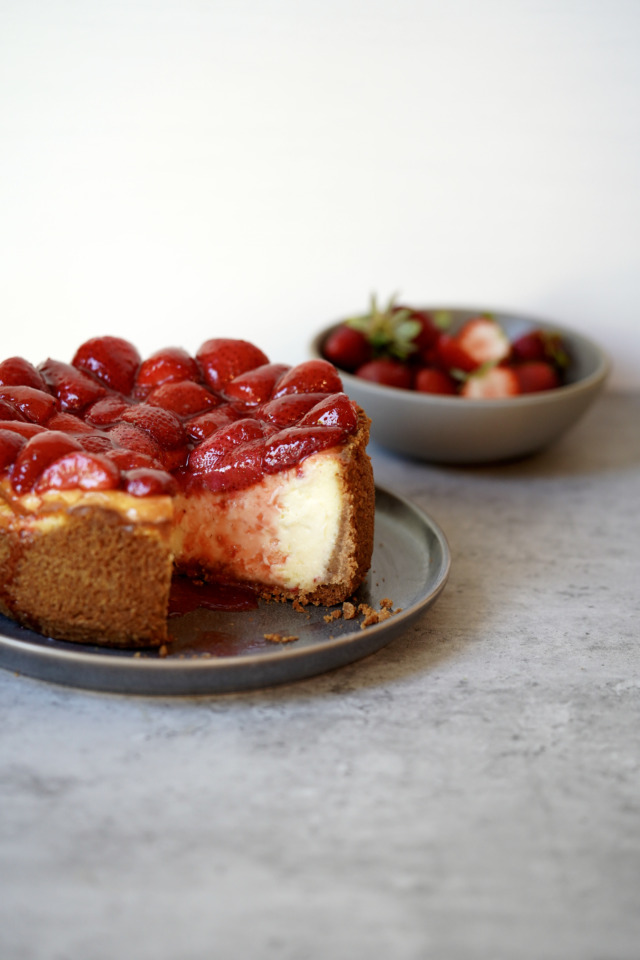 This strawberry cheesecake is a New York-style cheesecake made with full-fat cream cheese. The soft, unaged, cream cheese gives this cheesecake a mild flavor with a subtle tang. Some still question it, but  Arnold Reuben, a German-Jewish immigrant restauranteur from Manhattan, takes credit for inventing New York-style cheesecake. But Reuben also claims credit for the invention of the famous Reuben sandwich, (consisting of a grilled corned beef on rye with Russian dressing, sauerkraut and Swiss cheese), which is also debatable.

But as far as cheesecake is concerned, Reuben claimed he was served a sweet “cheese pie” at a 1929  dinner party, and enjoyed it so much he got the recipe from the hostess. Ruben tinkered with the ingredients, substituting cream cheese for curds. Reuben’s served his new-style cheesecake to patrons at his restaurants generating extensive praise and spinning off numerous imitations by fellow rivals, further increasing the desserts popularity. 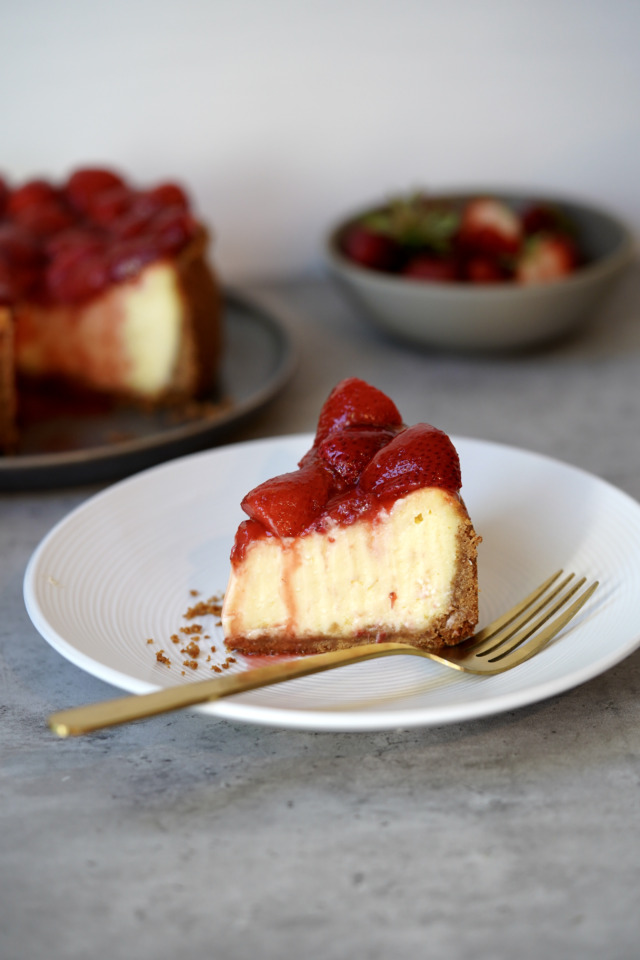 If Reuben introduced cream cheese cheesecake to New York, many food historians will argue it was not Reuben, but Lindy’s Restaurant that actually put it in the limelight. In August 1921, Leo “Lindy” Lindemann and his wife Clara, (from Manhattan, by way of Berlin, Germany), opened a deli on Broadway in Midtown Manhattan, in the heart of the Theater District. Lindy’s featured a creamy cheesecake topped with strawberries in a “gel“. Legend has it, that Lindy hired Reuben’s baker to procure the top secret cheesecake recipe from Ruben and then claimed it as his own.

Although the two cakes were not identical, they were very similar. Clementine Paddleford, who is known as America’s first food journalist, published a story including what was believed to be Lindy’s cheesecake recipe, in a 1948 Los Angeles Times article titled, “Here’s the Recipe for a Broadway Favorite, held Secret Till Now”. This recipe, which had cream cheese, heavy cream, and a “cookie dough” crust, sky-rocked the dessert even further, and the rest they say is cheesecake history.

New York-style cheesecake has always been my favorite, perhaps that’s because I grew up in NYC. As a kid, I prefered it straight up, sans any fruit or god-for-bid, any gelatinous gel topping. But I’ve matured since then. The older me still prefers New York-style cheesecake over the others, but I now love strawberries on top, which I feel, flavor and texture-wise, compliments the creamy cheesecake perfectly. But to be perfectly clear, I’m still not a “gel” fan, that is just something I can never get behind. 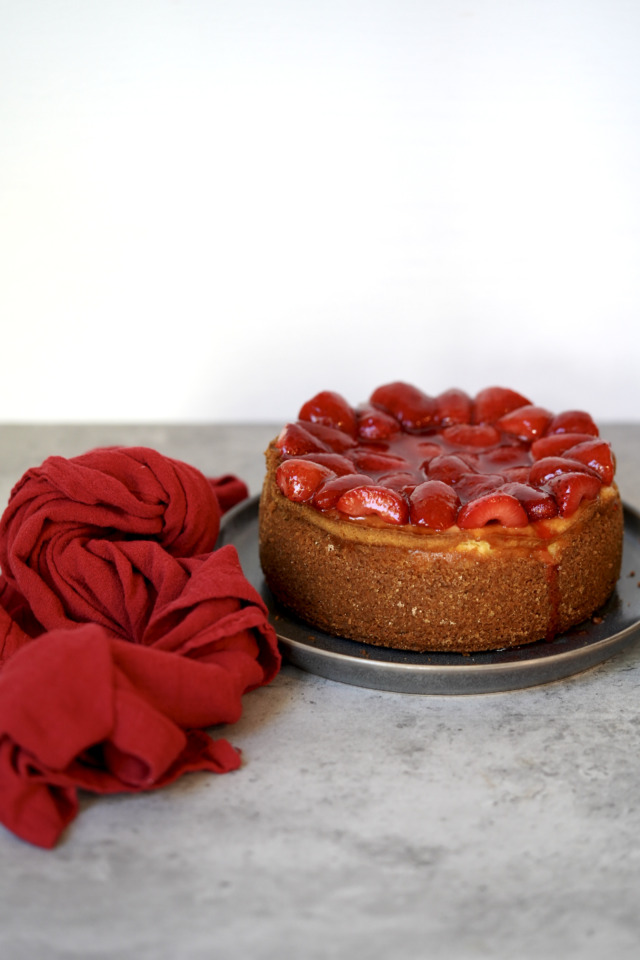