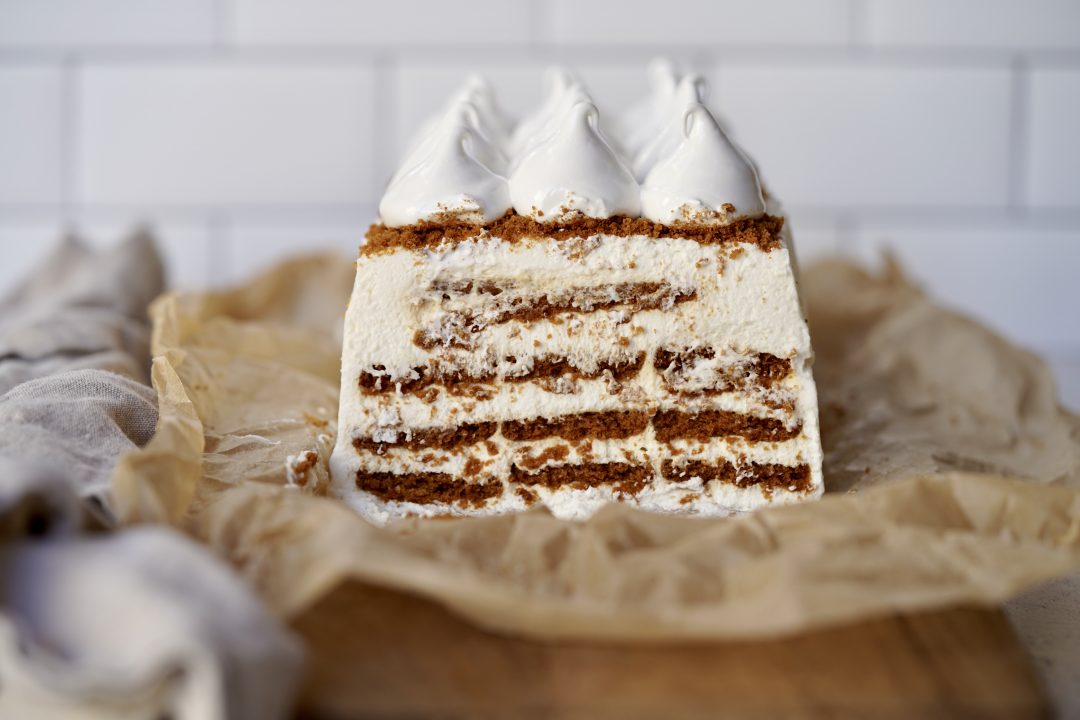 You can’t advert your eyes and you know it. It’s a Biscoff mascarpone icebox cake and it is killer. This beauty is the easy, prep-ahead holiday dessert you’ve been looking for. Building an ice  box cake is not difficult, the trick is chilling the cake untouched. Overnight, magic happens. The cream will soften the cookie layers in the cake, and you will end up with the perfect soft, creamy, not to mention fluffy, icebox cake that required no baking whatsoever. Score.

But before I speak more about this lovely Biscoff mascarpone icebox cake, let me share a little history about these amazing biscuit cookies most of us had a billion times without even knowing it. 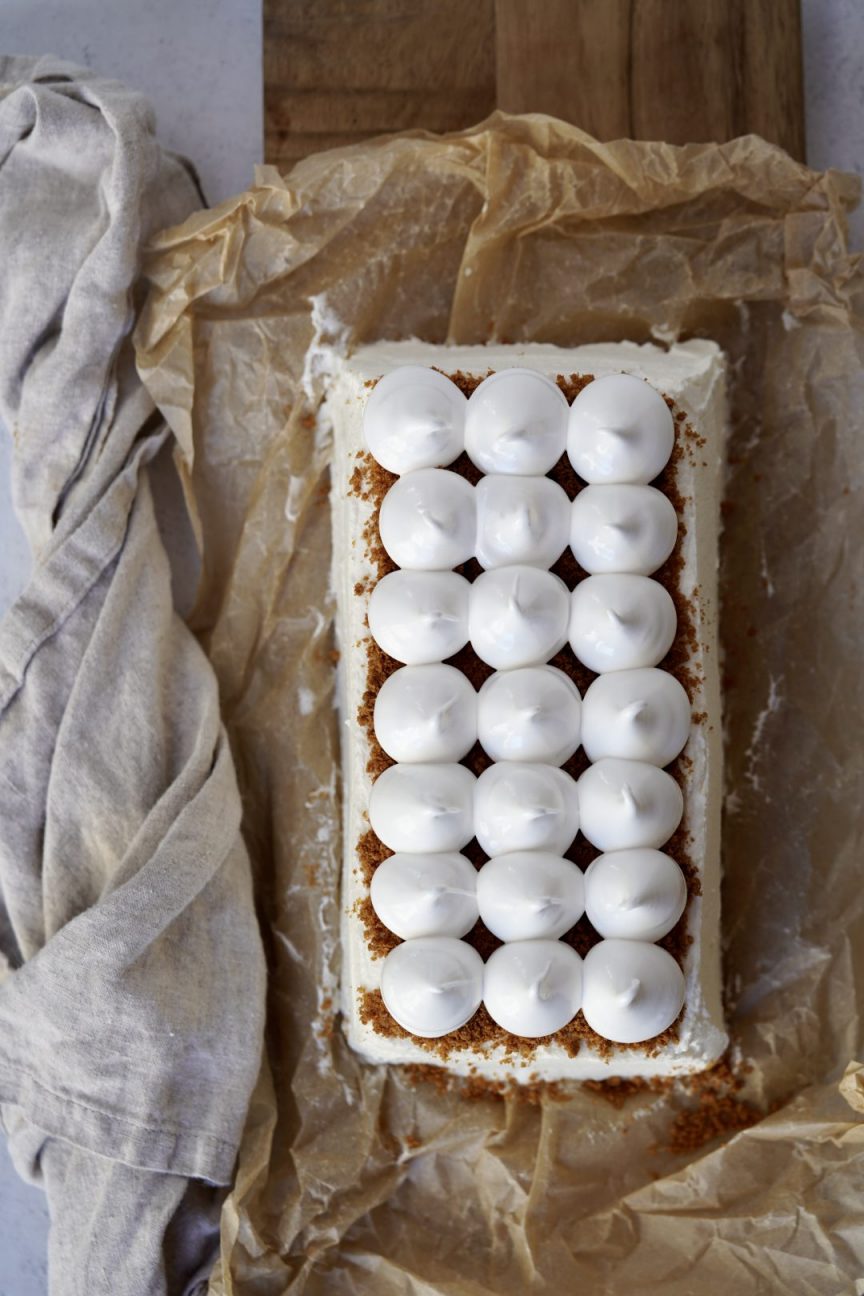 The History of Lotus Biscoff:

Known in Europe as Lotus Speculoos, this cookie was invented in Belgium, in the town of Lembeke, in 1932. Biscoff cookies have been baked according to the original recipe since their invention. These famous caramelized biscuits are made from natural ingredients and because if it’s simplicity, the Boone brothers named them “Lotus“, after the flower that symbolizes purity.

The Boone Brothers decided to introduce their Lotus cookie paired with coffee to attract more attention. Biscoff and coffee became an instant hit and the uniquely spiced cookie skyrocketed in popularity in Europe shortly after being served at the 1958 World’s Fair. By the 1960’s the biscuit and coffee trend became a routine in Belgian and Biscoff cookies were quickly crowned Europe’s favorite cookie.  Around the late 1980s these famous biscuits made their way across the pond. Once in North America, the name Lotus Speculoos quickly got changed to “Biscoff,” a combination of the words “biscuit” and “coffee“, meant to highlight what this cookie did best: pair with a cup of coffee. 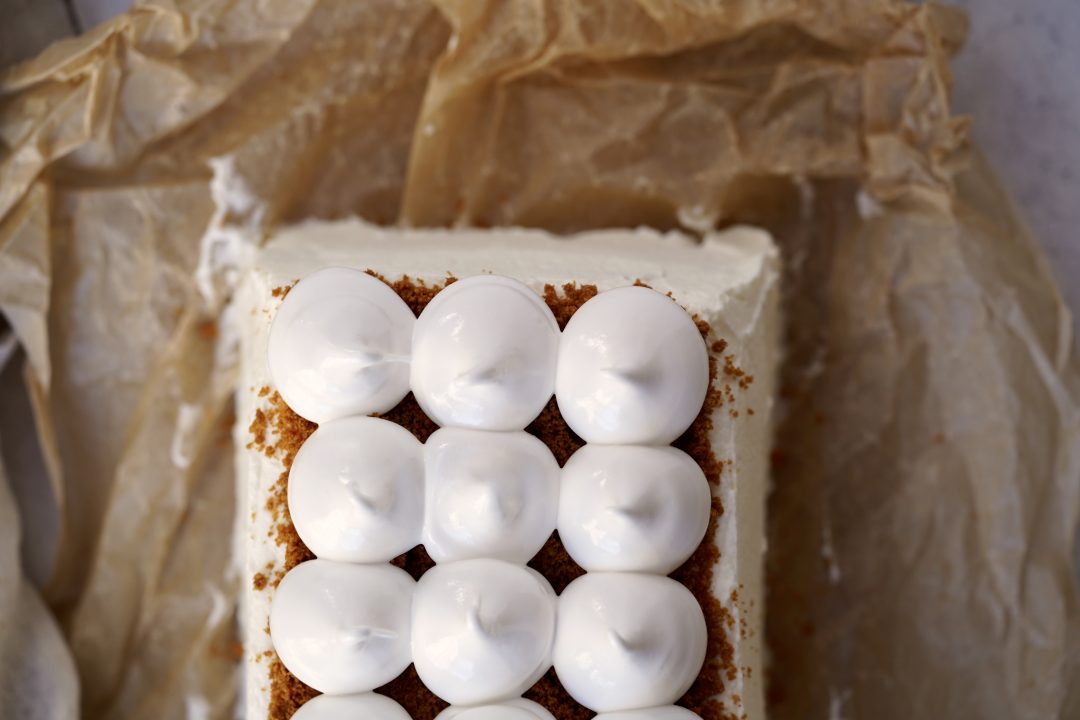 The Belgian cookie first appeared stateside in the late-’80s, but that would not have happened without the help of Delta Air Lines. Delta was the first to popularize the cookie and, during pre-pandemic times, handed out over 80 million packages of the buttery, crumbly, spiced cookies each year.

Over the past 30 years these simple cookies have been served as the on-board snack of many domestic airlines and a few international carriers. Biscoff is now also available all over the country in grocery stores and as “cookie butter,” a tasty spread made from the well-known cookie itself. 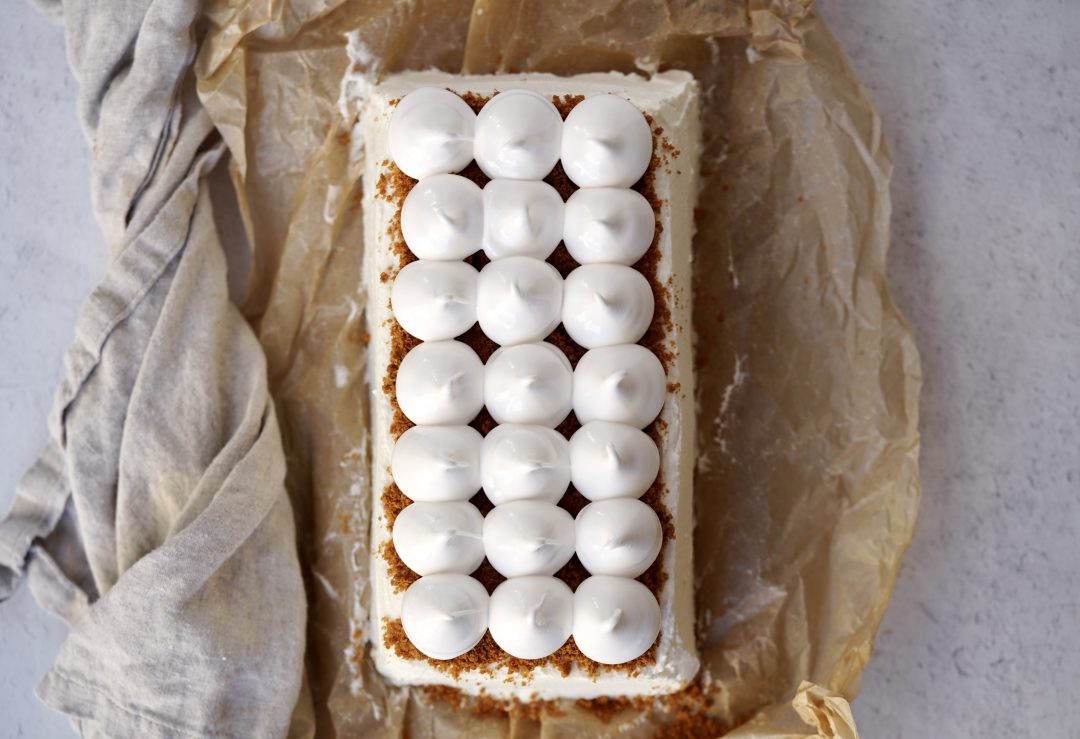 America can thank a US-based food broker, Michael McGuire, for discovering Biscoff cookies. Apparently, McGuire was traveling in Europe, where he tasted the cookie and liked it so much he brought it back to the US and introduced it to Delta. The airline did not hesitate, snapped it up, and began serving Biscoff cookies it in-flight around 1985.

According to Dan Mord, general manager of domestic product design for Delta, with their long history in the in-flight food space, neither he, nor his colleagues, are aware of any other food success of the same magnitude. The Biscoff cookie “has become an iconic part of the Delta brand itself.”

Delta first began by serving a smaller package of Biscoff cookies, but now, Delta serves a bigger double pack and each cookie is emblazoned with Delta’s name. That is branding like no other.

The icebox cake is derived from similar desserts such as the charlotte and the trifle, but made to be more accessible for housewives to prepare. Icebox cakes were first introduced to the United States in the 1930’s, as companies were promoting the icebox as a kitchen appliance.

The trick to making the perfect icebox cake is all about the chill time. It’s best to chill an icebox cake in the refrigerator, lightly covered with plastic wrap, for at least 8 hours, but preferably overnight. If the cookies you are using are very thin, less chill time could work, but the fluffy cake-like texture is really only obtained with longer chill times. 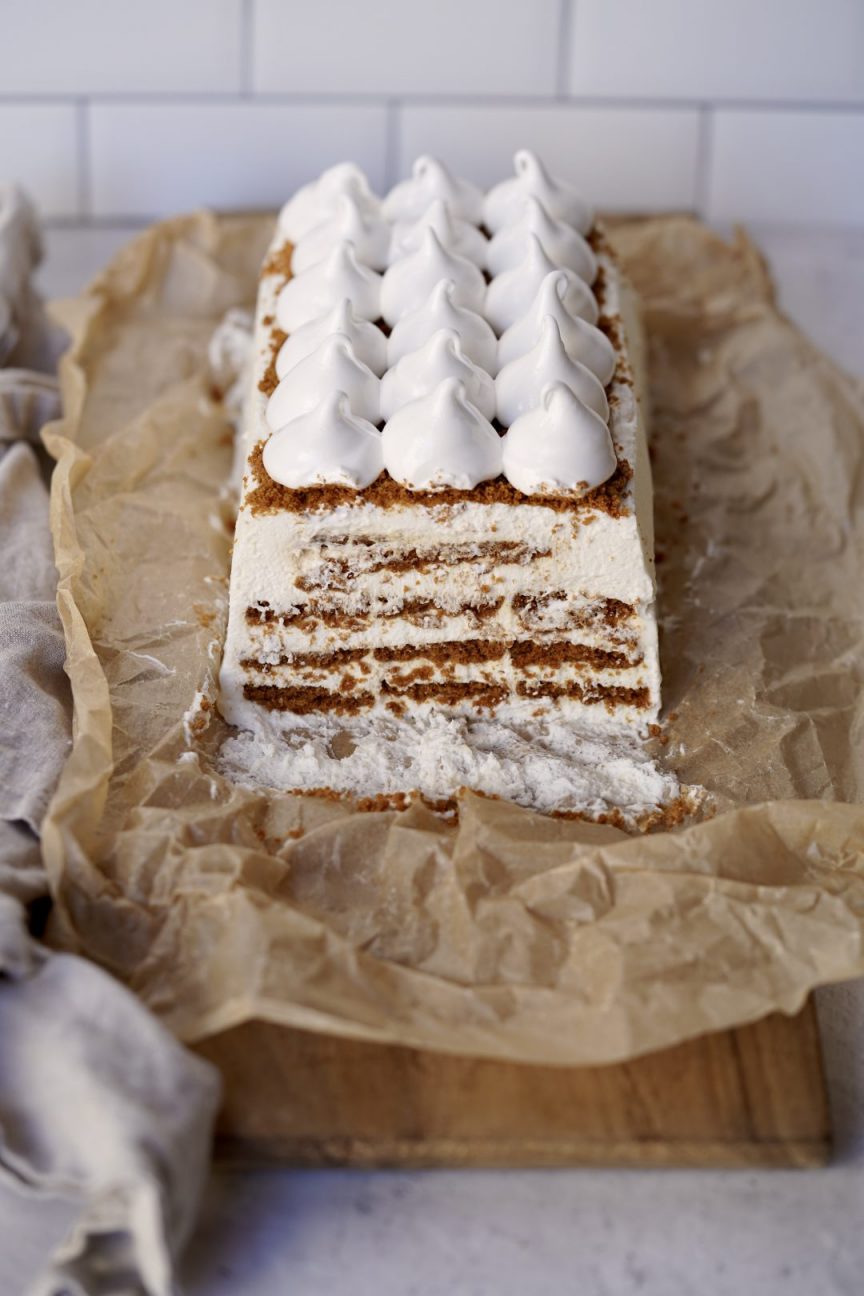 Now that I’ve cleared up that confusion, nothing should be stopping you now. People tell me often, “I hate to bake” or “I hate making cakes because I’m terrible at it“, well, this Biscoff mascarpone icebox cake is your answer to that. And it’s honestly foolproof. Just make sure to get those biscuits soon, they fly off the shelves around the holiday season. 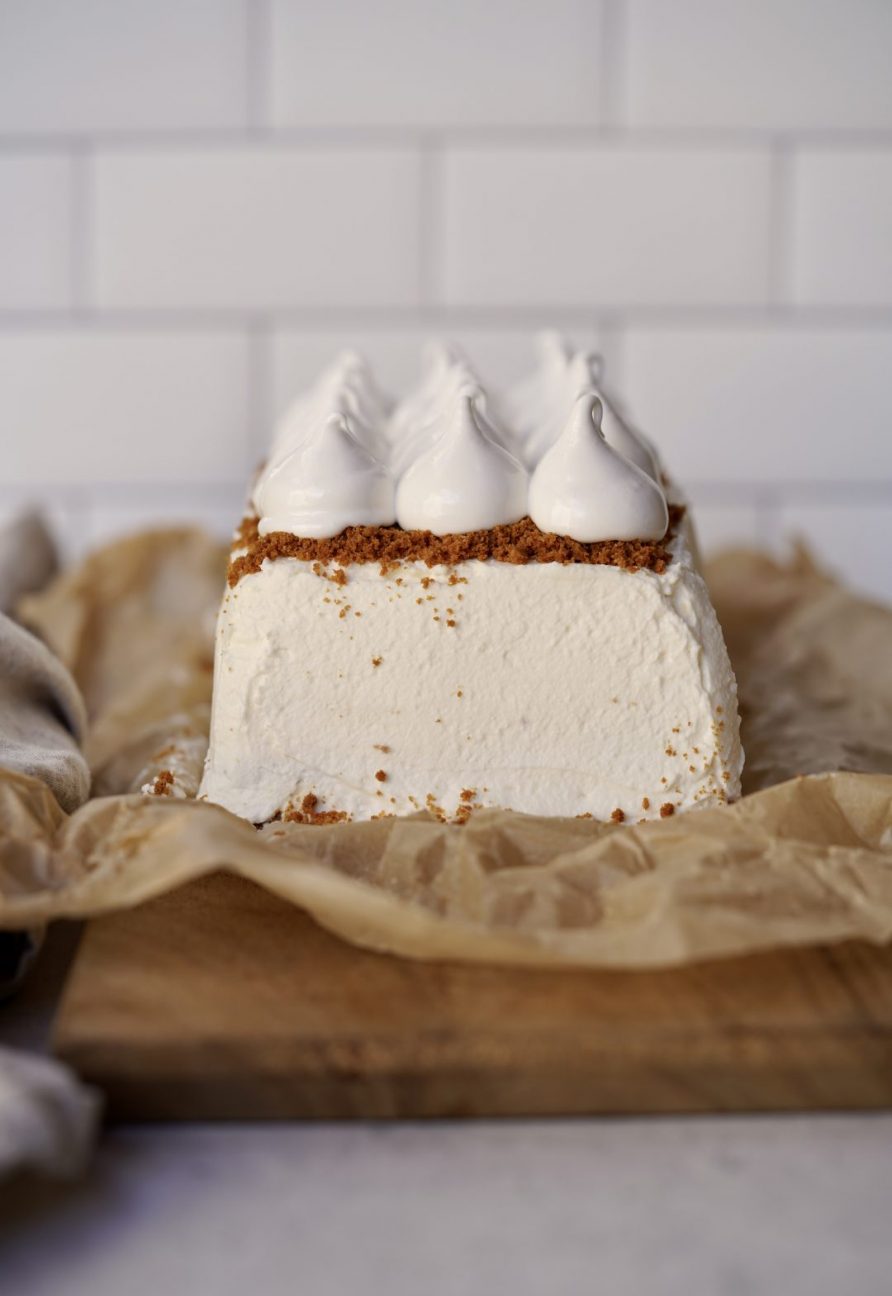