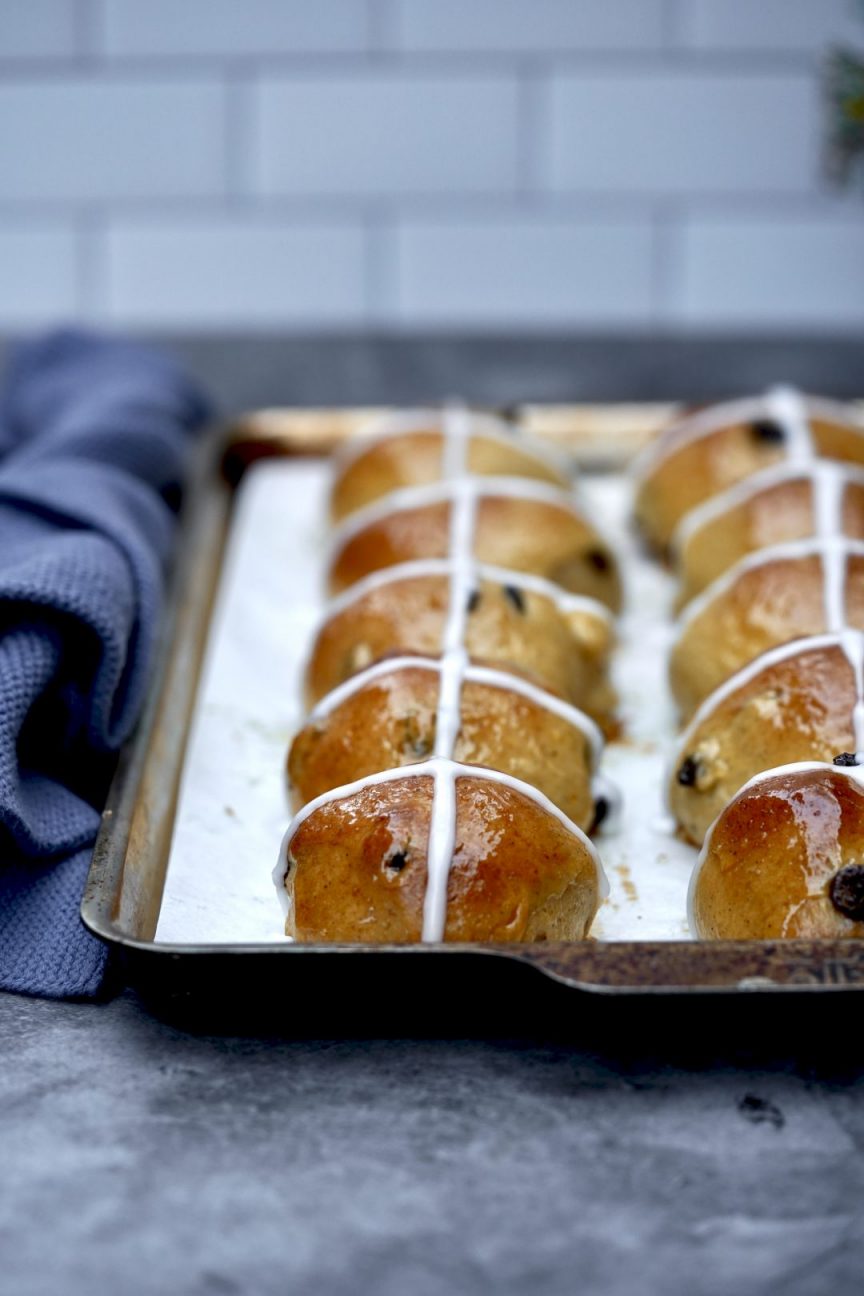 I’m Jewish, but I was born Christian. I’ve blogged about this before. The short story is, I converted years ago when I got married. Growing up, my family was not really religious at all, but we celebrated the major Christian holidays, mainly through food, family time and gifting. Easter was a favorite. I loved glazed ham and Easter baskets and looked forward to both each year. Hot cross buns were not something my family regularly ate, although they always intrigued me. But it wasn’t until recently that I took a deep dive into their origin and developed my own recipe to share with you. 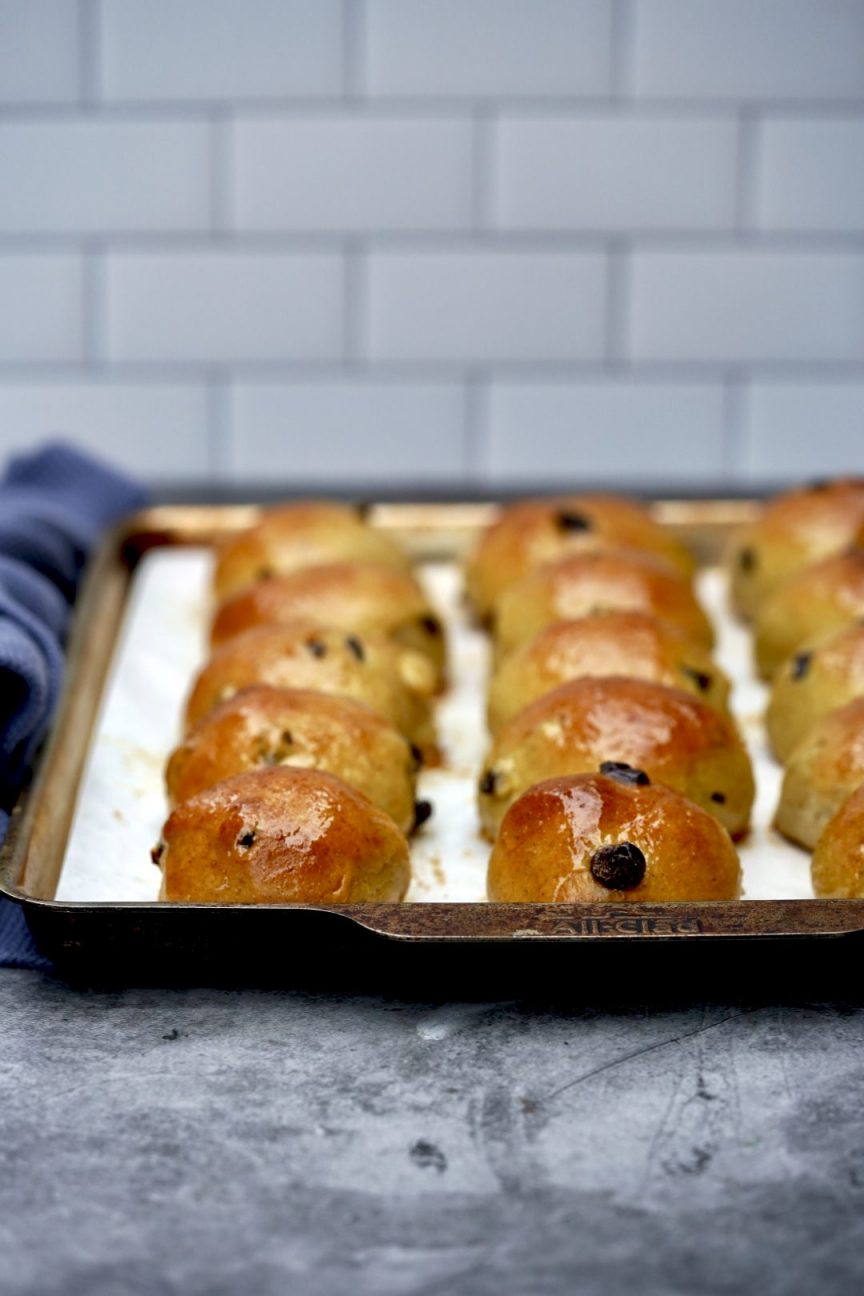 What Exactly Are Hot Cross Buns?

A hot cross bun is a yeasted sweet bun that is typically lightly spiced and studded with either raisins or currants. Their trademark, the well-known cross on top, is traditionally piped in icing or etched into the dough itself. These famous buns have been a holiday staple of many communities for centuries and are traditionally eaten in the United Kingdom, Ireland, Australia, New Zealand, South Africa, and some parts of the Americas on Good Friday. The hot cross bun itself marks the end of Lent and different parts of the bun have a certain meaning; including the cross representing the crucifixion of Jesus, and the spices inside signifying the spices used to embalm him at his burial. 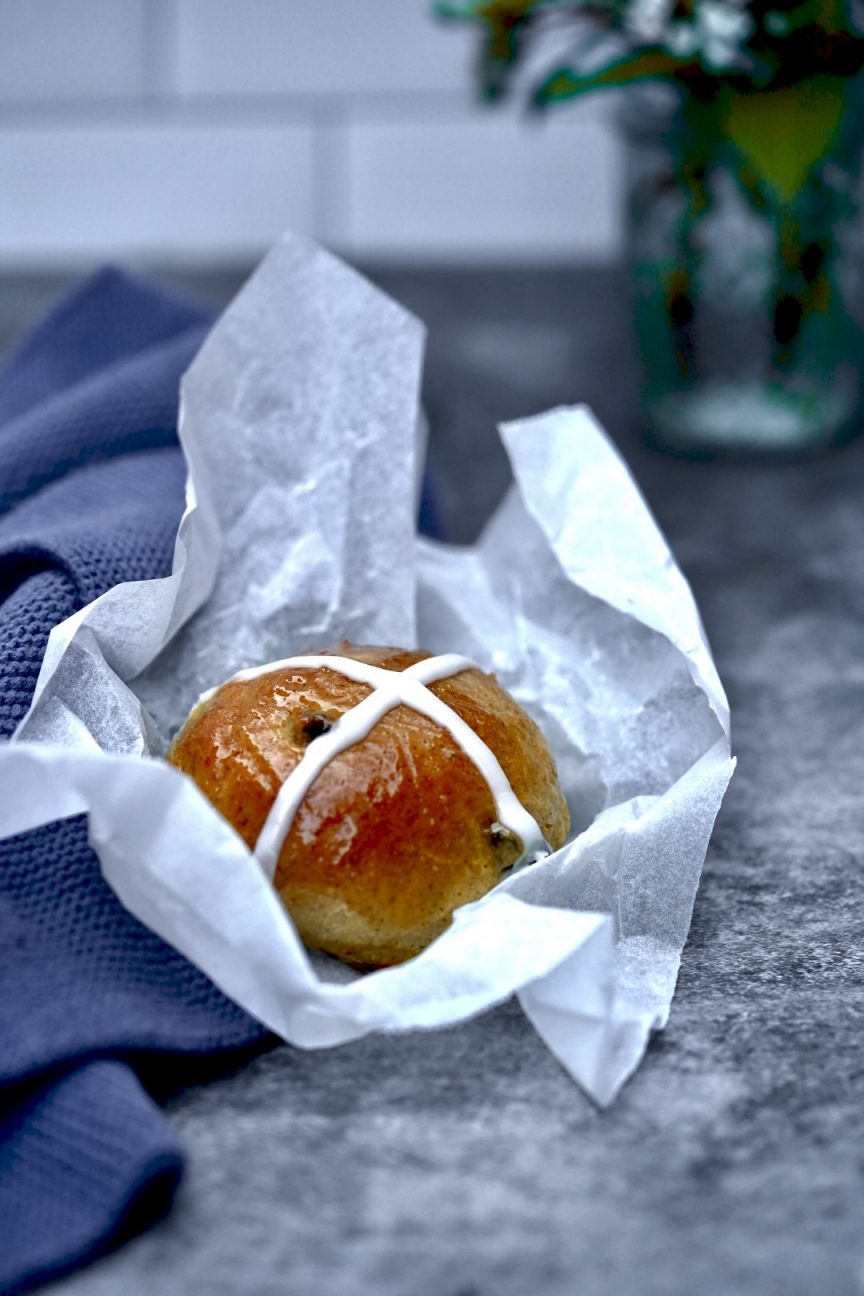 To the best of my knowledge, there isn’t a very clear explanation for why hot cross buns are as popular as they are on Easter. Some theories rely heavily on Christian symbolism, though there are several stories about their origins. Some theories talk about hot cross buns, once called Good Friday buns, being baked and eaten solely on Good Friday, while others mention them being eaten throughout Lent. Given the baked good’s long history, many legends and superstitions have had time to develop and grow around them. Here are five favorites I found in my research: 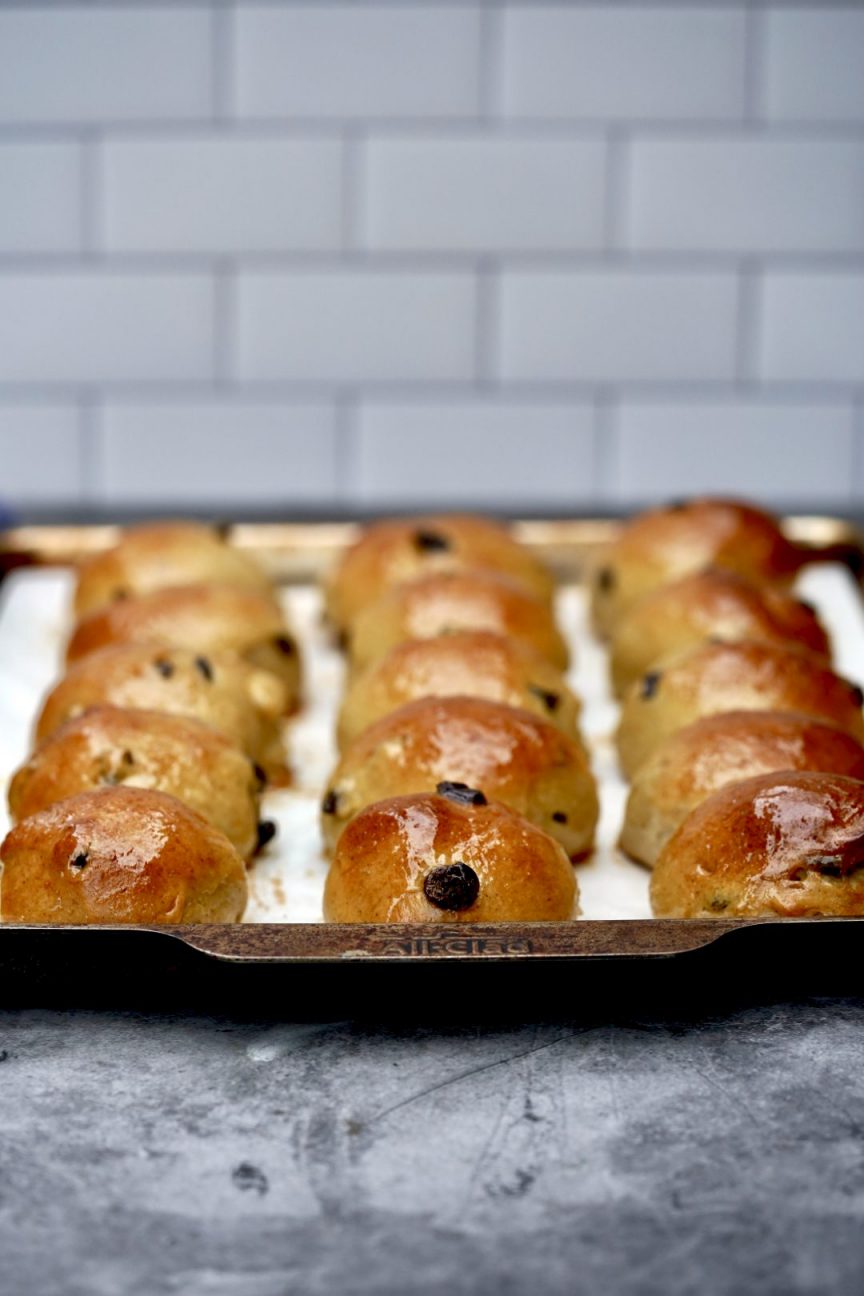 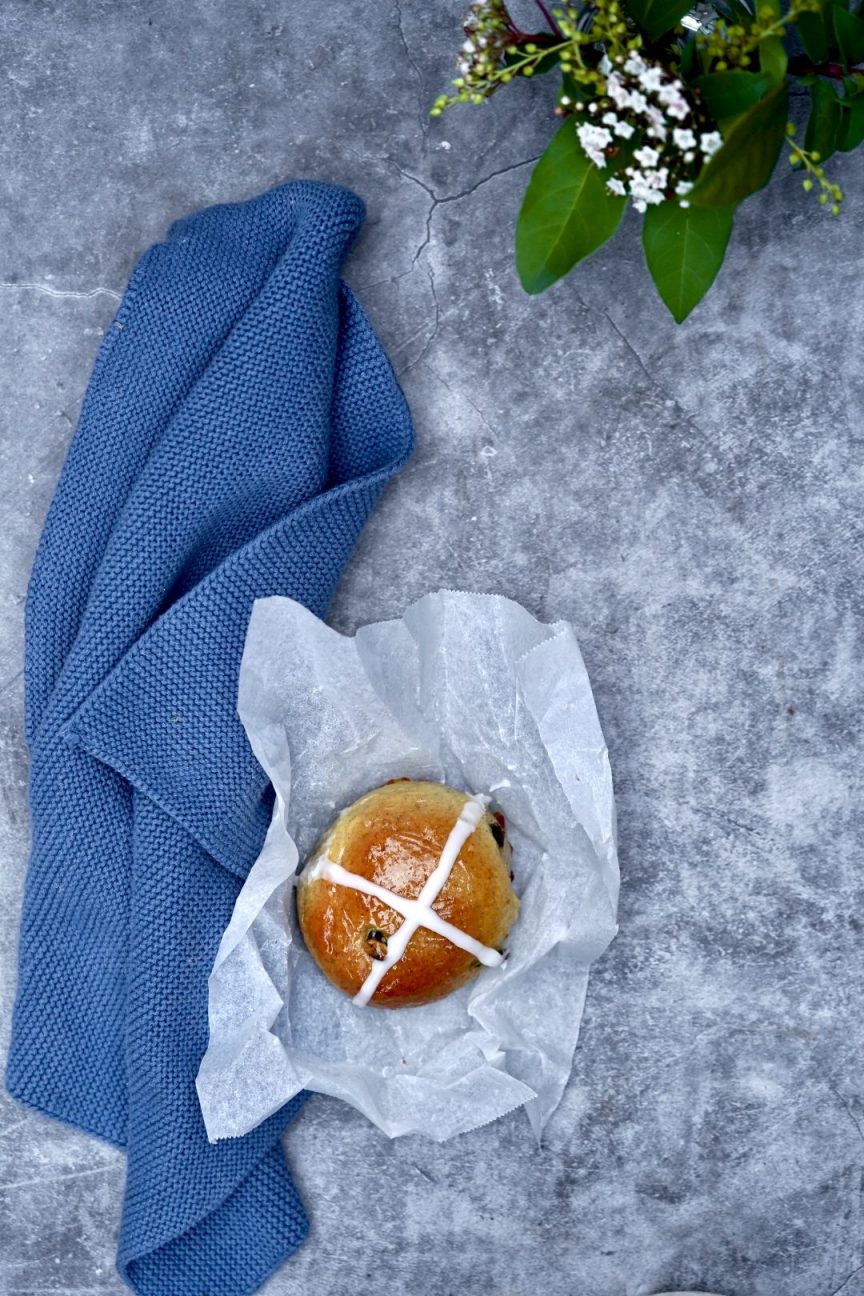 The honest truth is, my hot cross buns are a little less traditional than most, with less spice and more citrus. My recipe yields a soft, yet slightly dense, bun with great flavor, but this recipe is totally adaptable. I use raisins instead of currents, and the combination of brown sugar and orange marmalade glaze for sweeteners. Slightly sweet, but not overly so, and I make my cross with frosting, instead of a dough, because I love frosting. Some people think hot cross buns will be comparable to a traditional dinner roll and that is a true misconception, they are more similar to a breakfast sweet roll or cinnamon roll instead. 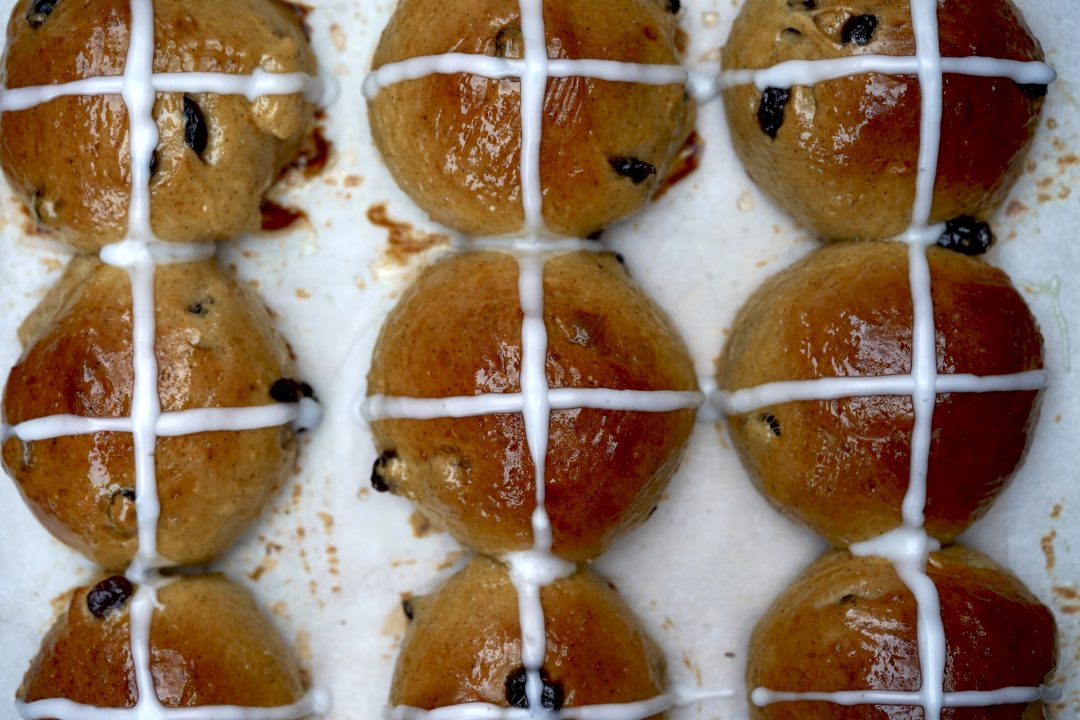