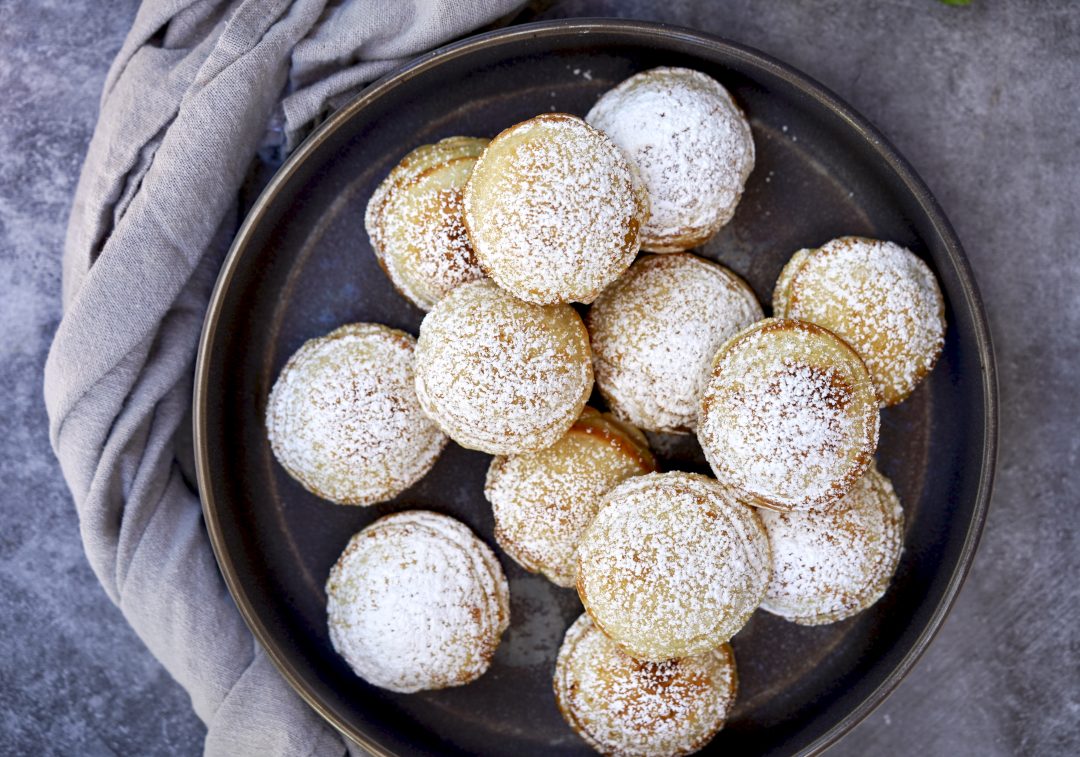 Danish Aebleskiver, also known as Danish pancake balls, are a traditional Danish food served during Christmas. The center of these Danish pastries are soft and fluffy, almost creamy. The crust is crisp and slightly browned and the apple filling is sweet and tangy. In Danish “Aebleskiver” simply means apple slices which is the most traditional fillings for this well-known Nordic specialty. Popular during the Christmas holiday season, Aebleskiver are commonly found in almost every Danish supermarket from November until well after Christmas. I fell hard and fast for Aebleskiver when I traveled to Denmark a few years ago. 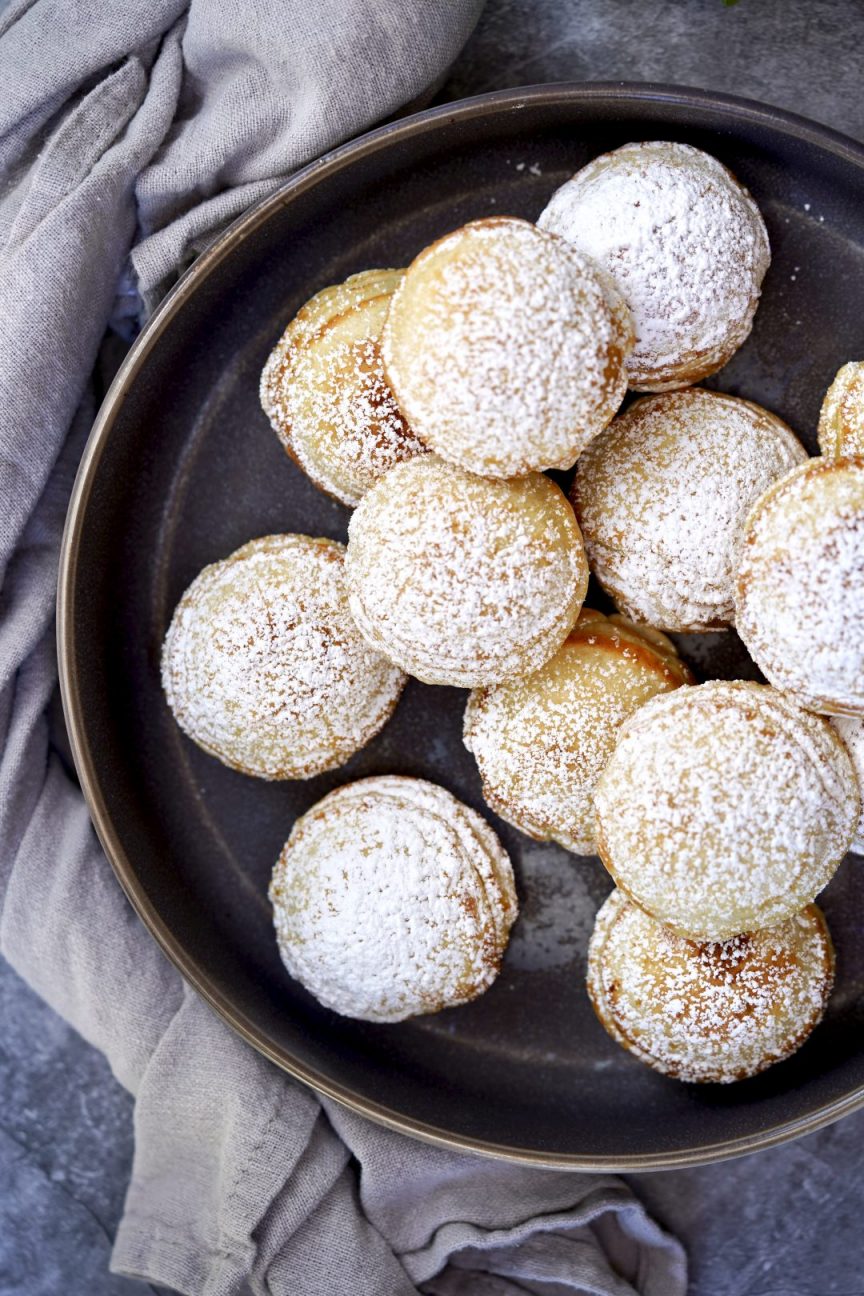 Unlike the American pancake, Aebleskiver (pronounced as “eb-el-ski-ver) are commonly served for afternoon coffee breaks or as a dessert on a cold Nordic winter night, along side glögg, a popular drink which is similar to American mulled wine. 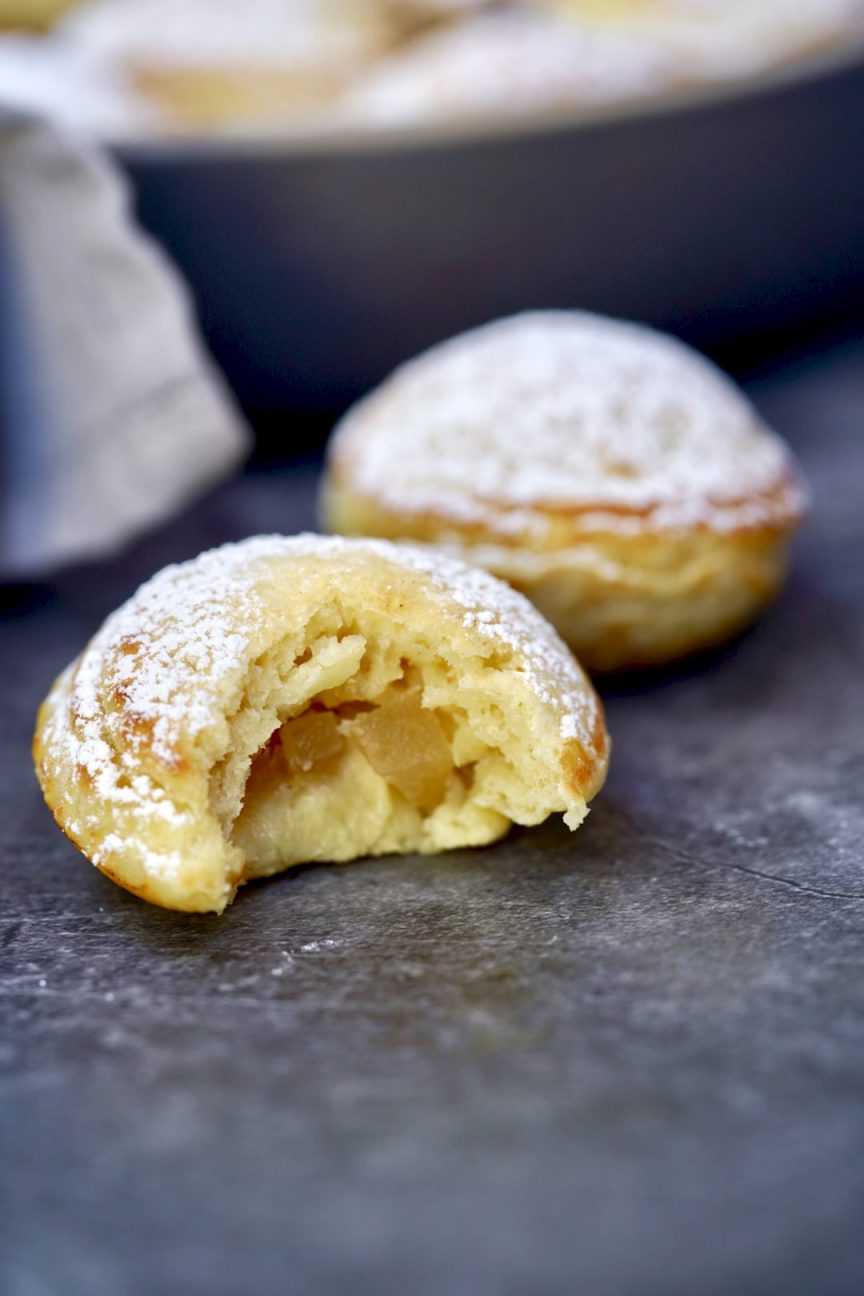 There are numerous recipes for making the Aebleskiver batter itself, but they generally fall into two categories: those made with baking powder/soda as a leavening agent (as is the case in my recipe), or those made with yeast. The batters vary in texture and flavor. Yeasted batters take patience to prepare and will expand more in the pan. But both versions are delicious, it’s just a matter of personal taste.

Traditional Aebleskiver were most often filled with small pieces of apples or sometimes applesauce (hence their name). In the modern Danish kitchens however, various fruit jam or chocolate fillings have become increasingly more common. 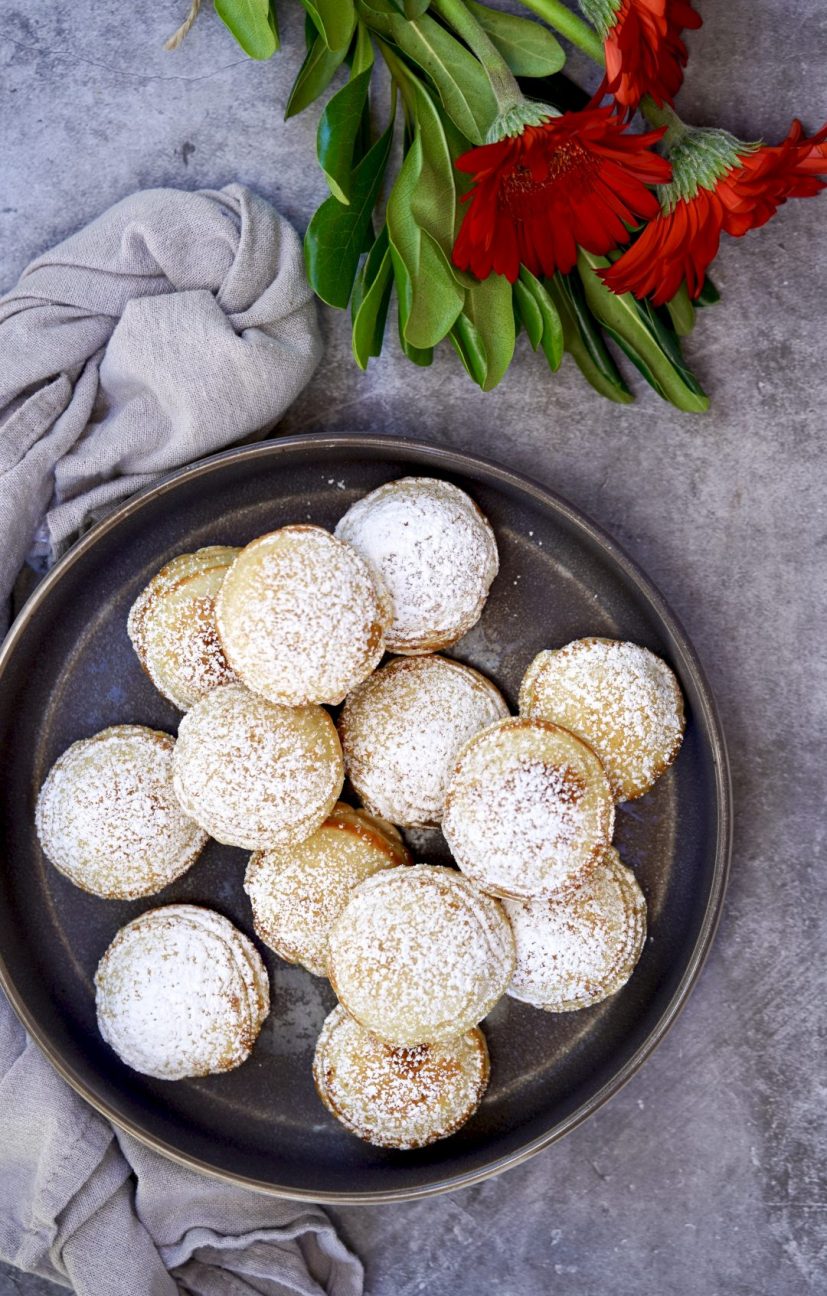 The cooking of Aebleskiver are done in a special Aebleskiver frying pan with half-spherical molds. The earliest known Aebleskiver pans are more than 300 years old and were made from hammered copper. But copper proved less than ideal. Soon copper got replaced by cast iron, which distributes heat more evenly and forms a natural nonstick surface. 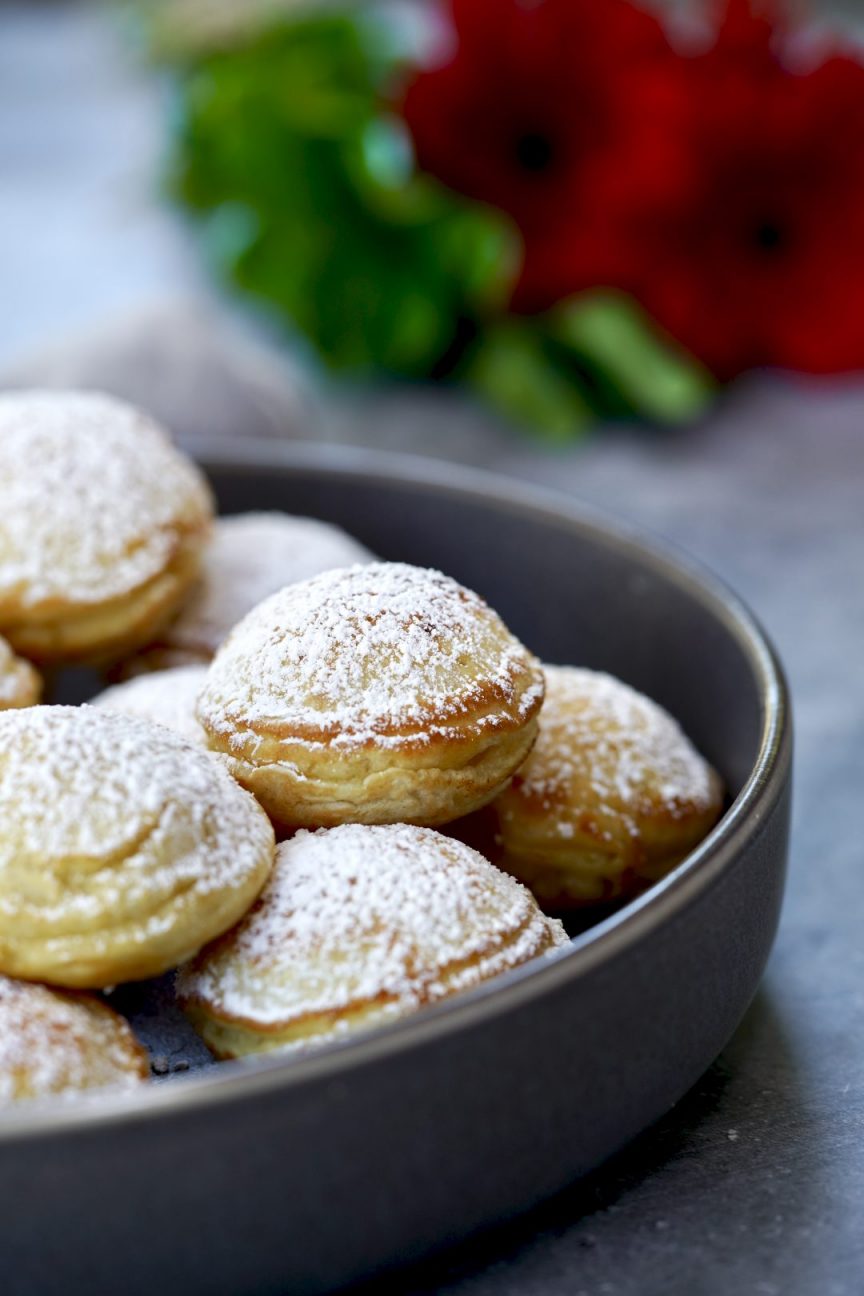 The Aebleskiver pan has a legend attached to it. It is believed that during the Viking age, one band of Vikings got hit very hard in battle. They returned to their ship with dented horn helmets and shields and they made pancakes to regain their strength. But because they didn’t have proper cookware, they greased their dented shields, poured the batter in them and placed over a fire. And thus the first Aebleskiver’s were born (or so they say…). 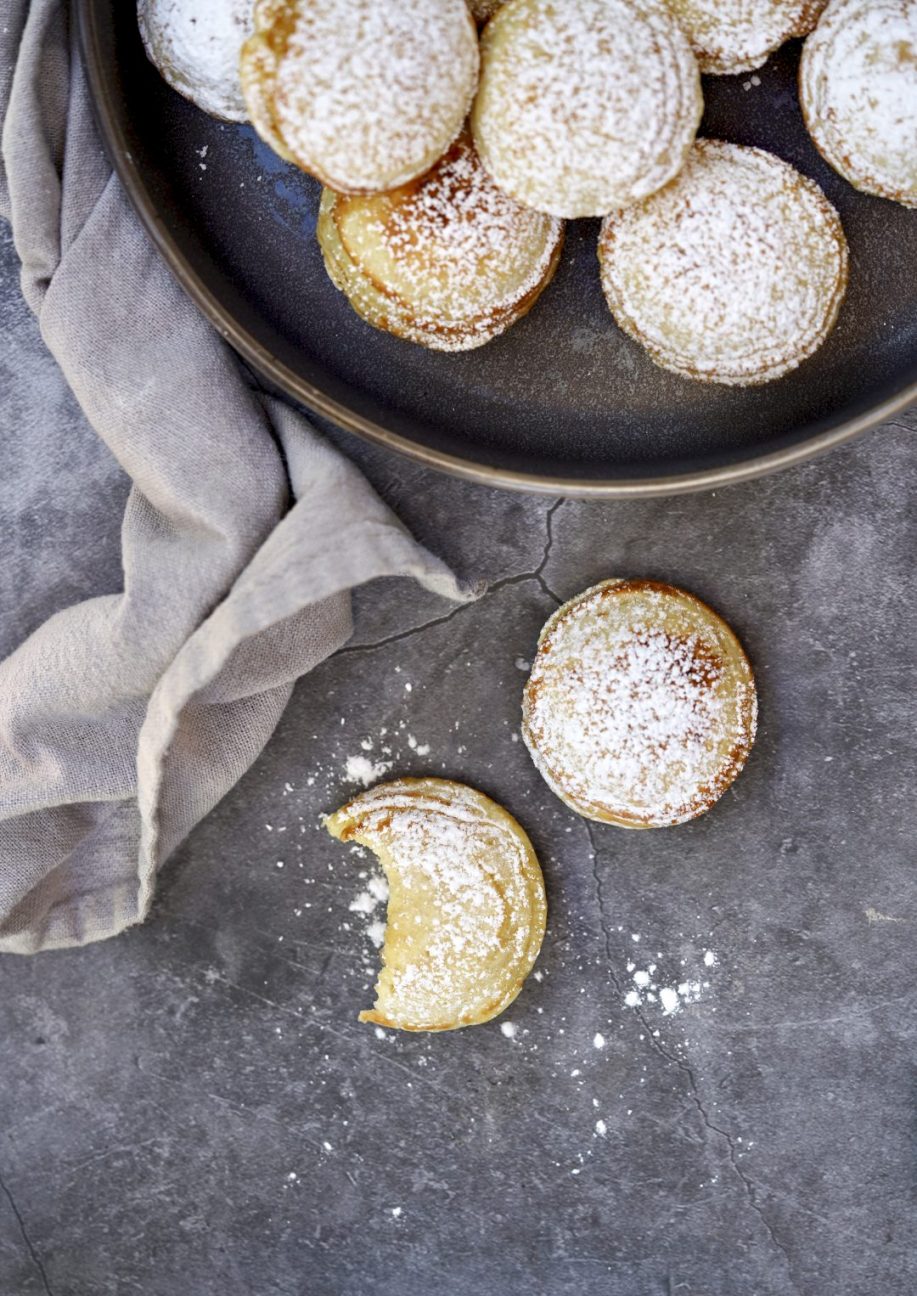 To me, Aebleskiver’s are a cross between a pancake and a donut, although they are slightly airier and lighter than either of those. And although the Danes consider them more of a Christmas dessert, I enjoy them year-round, for breakfast, lightly dusted with confectioners’ sugar alongside a cup of of coffee. 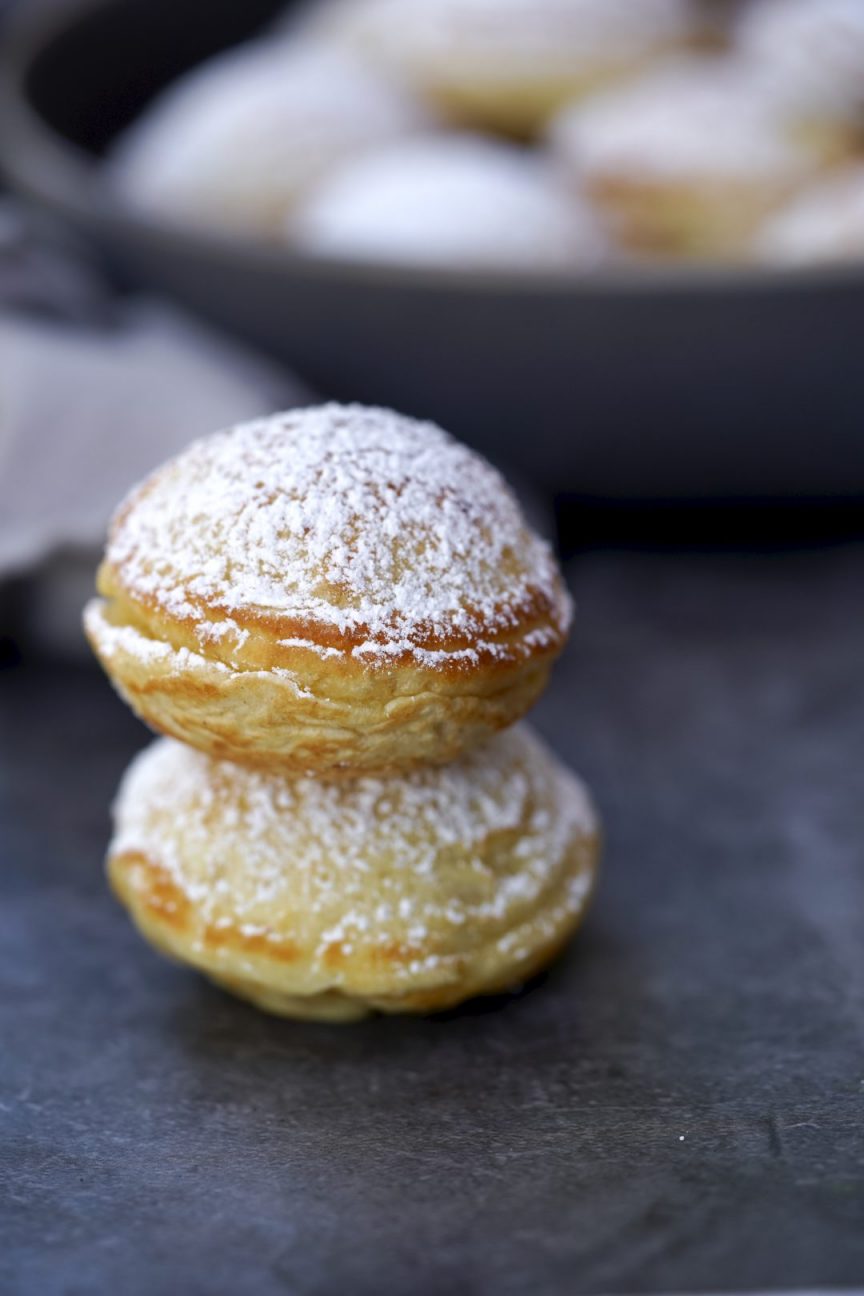