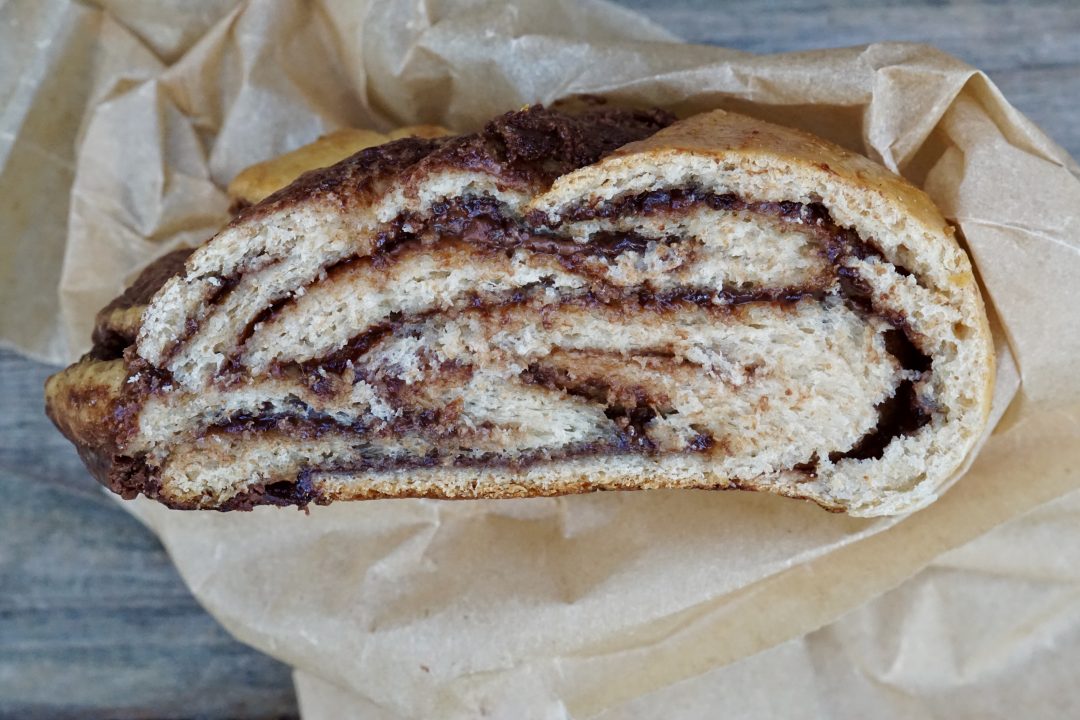 I think my little one is addicted to Nutella. Seriously, he would eat it every day if I allowed it. For the record, I don’t, it’s a treat.  I can’t blame him actually.  Who does not love this chocolatey-hazelnut spread inside a warm crepe?  It’s totally my fault, I introduced him to this dessert spread years ago. He’s been a fan of it (and crepes) ever since.

Most of you know this already, but Nutella is a brand of sweetened hazelnut cocoa spread manufactured by the Italian company Ferrero.  This sweet treat was first introduced in 1965.  The creation of Nutella can actually be traced back further, to the mid 1940s, when there was very little chocolate available due to rationing in WW II. A bakery owner named Pietro Ferrero from the Piedmont, Italy region began using hazelnuts (which were common to the area) to help extend the limited chocolate supply. Ferrero called this product, typically sold in blocks, “Pasta Gianduja“.  In 1951, Ferrero began to offer a creamy version he called “Supercrema“. It was not until 1963 that Ferrero’s son Michele Ferrero rebranded his father’s Supercrema and began marketing it throughout Europe. With only slight changes made to the original formula, Ferrero renamed his father’s invention “Nutella”. The very first jar of Nutella left the factory on April 20, 1964. Nutella became an instant success and remains so today.  Now there are tons of Nutella-like products out there, some more healthful than the original. Although I’ve yet to try it, you can make your own homemade Nutella-like spread at home.  If you’re interested, David Leibovitz makes a great one. if you’re looking for a vegan chocolate-hazelnut spread option, try this. 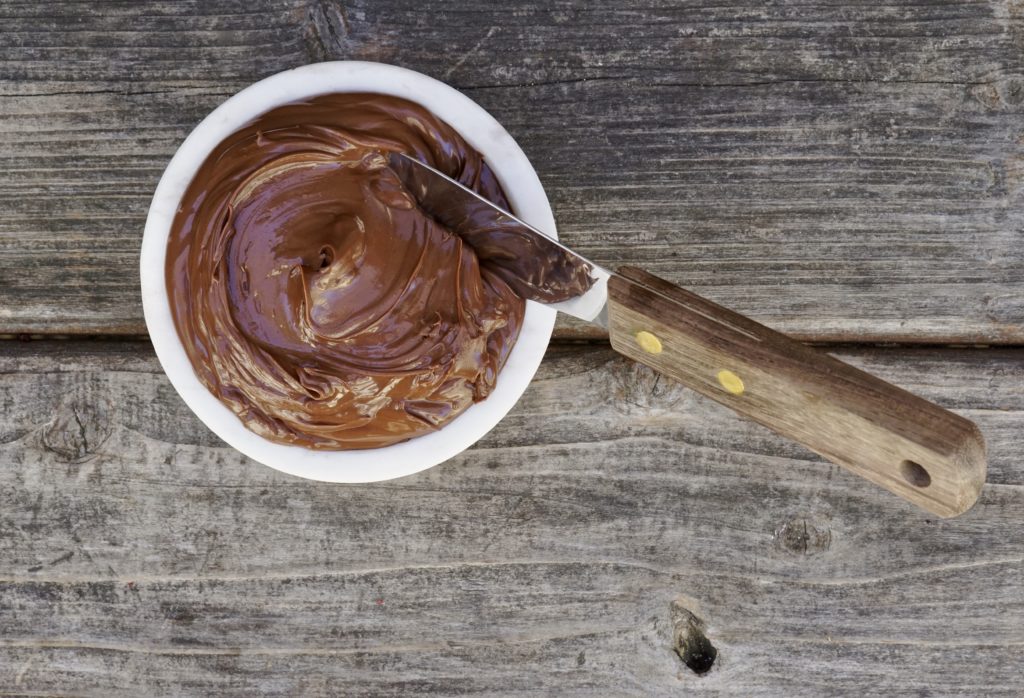 No matter what brand or version you use (store-bought or homemade), this chocolate spread is tasty and fun to use fun baking.  There are many recipes out there using Nutella; I’m sure folks have tried just about everything.  But this is a recipe I put together for my little Nutella lover on a cold winter day when he was home sick from school.  Let’s just say, it made him feel happy. 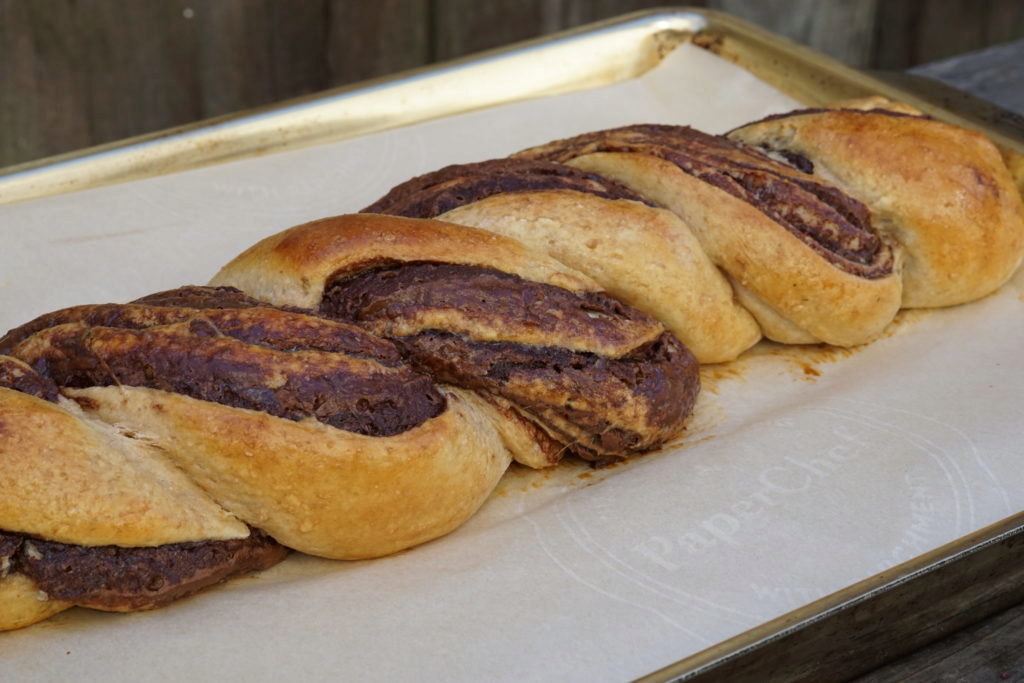 I don’t bake a lot of breads.  Breads take time, patience and great skill.  But this is a an easy bread, using a dry yeast and not too much rise time.  I used a mixture of whole wheat and regular flour to make the texture slightly more interesting, at least to me.  To make this sweet Nutella bread, you just need to follow a few simple steps to get the appearance you want. 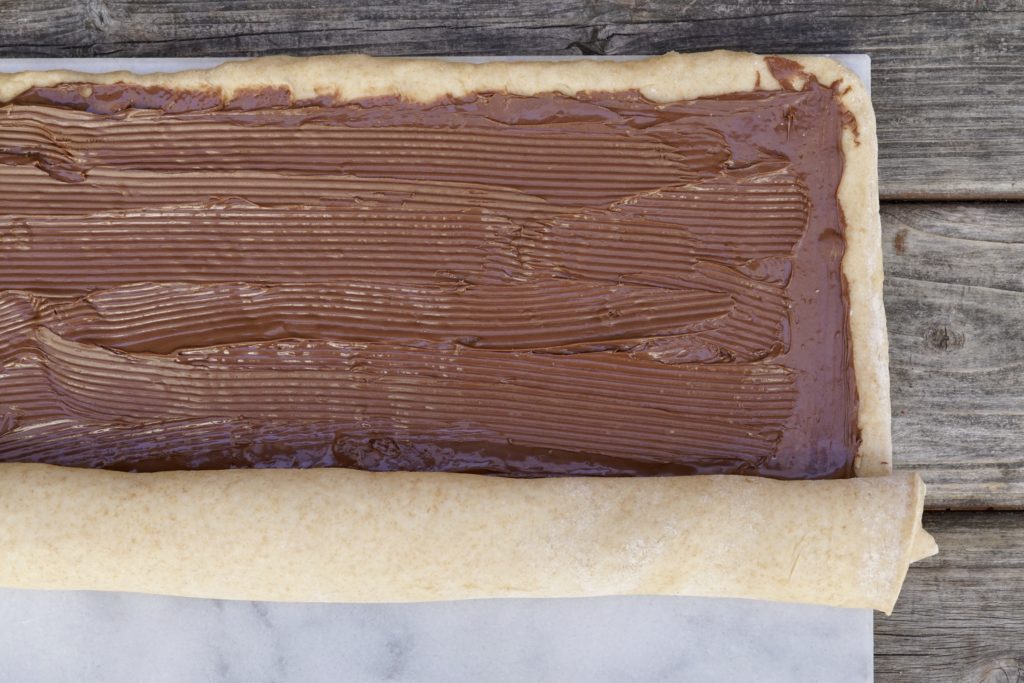 Once you roll the dough into a rectangle, you want to evenly spread the Nutella on the dough. 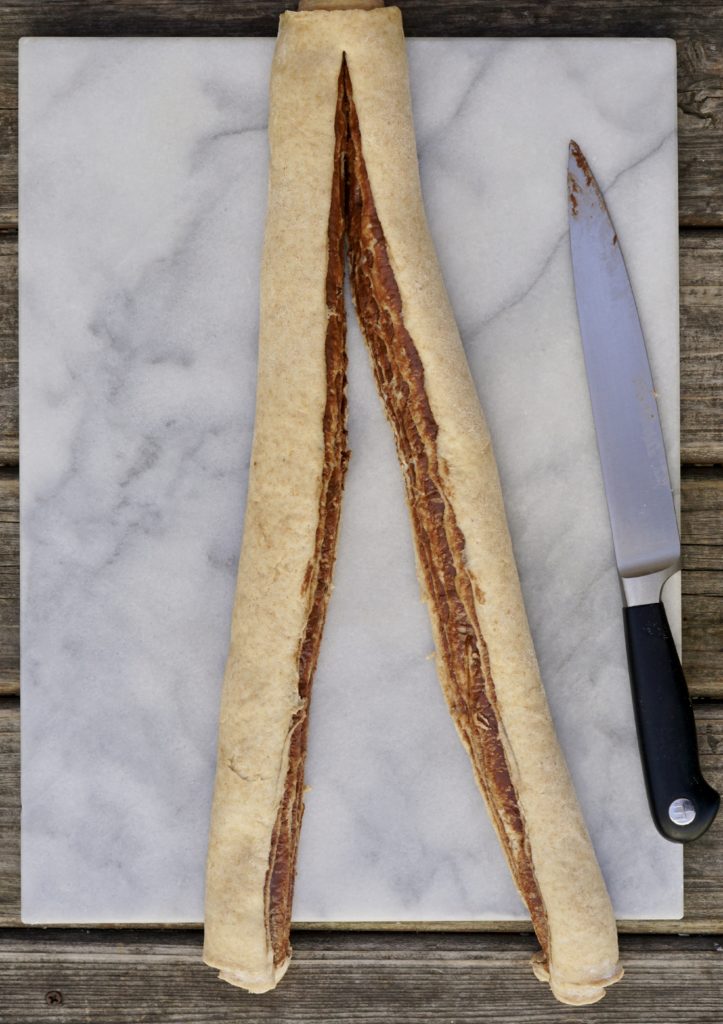 Cutting the dough almost entirely lengthwise will help you get that beautiful breaded appearance, similar to challah bread. 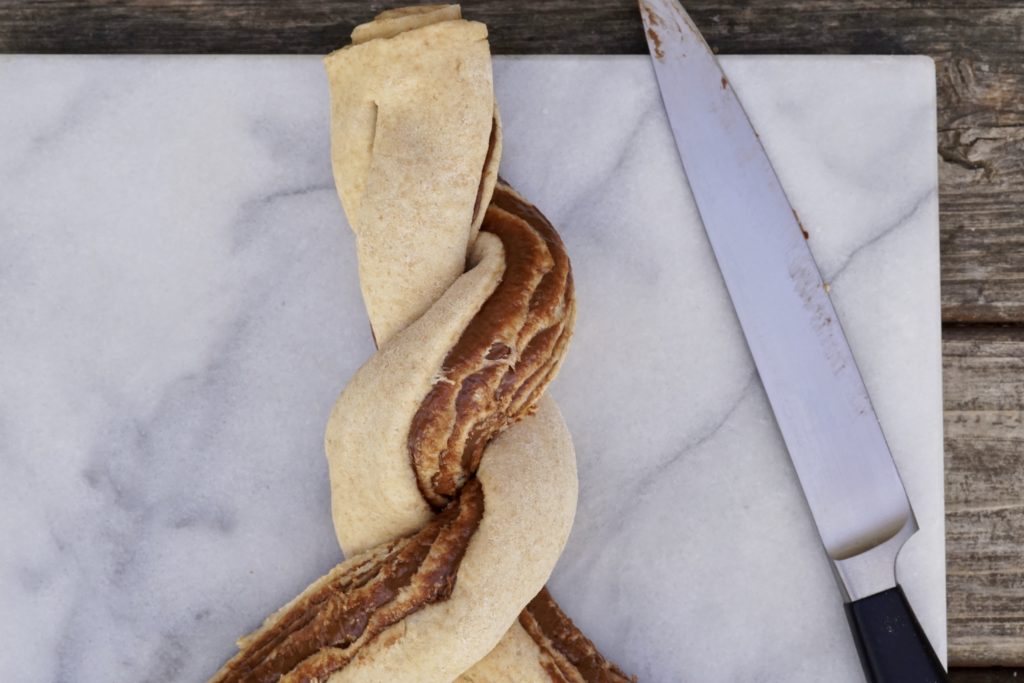 Braiding the two pieces of dough and try to make sure that the chocolate is visible on the outside for all to see. 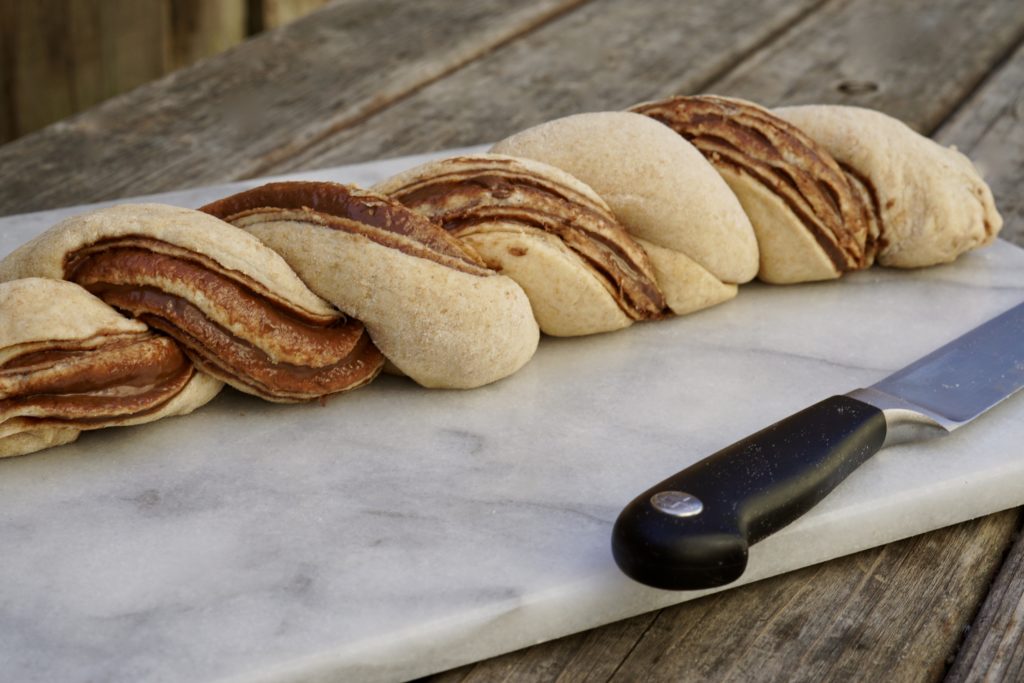 Once the dough is braided, allow it to rest and rise slightly before baking it off. In just 20 minutes, your beautiful Nutella bread is done. With its layers of chocolate weaved in, it resembles another favorite of my family: the time-intensive chocolate babka or even more decadent chocolate babka with mixed nuts. But this bread is not nearly as sweet as babka.  Of course, if you have a real sweet tooth and want more of a dessert, you can increase the sugar.  For me (and my family) we prefer a slightly less-sweet treat. 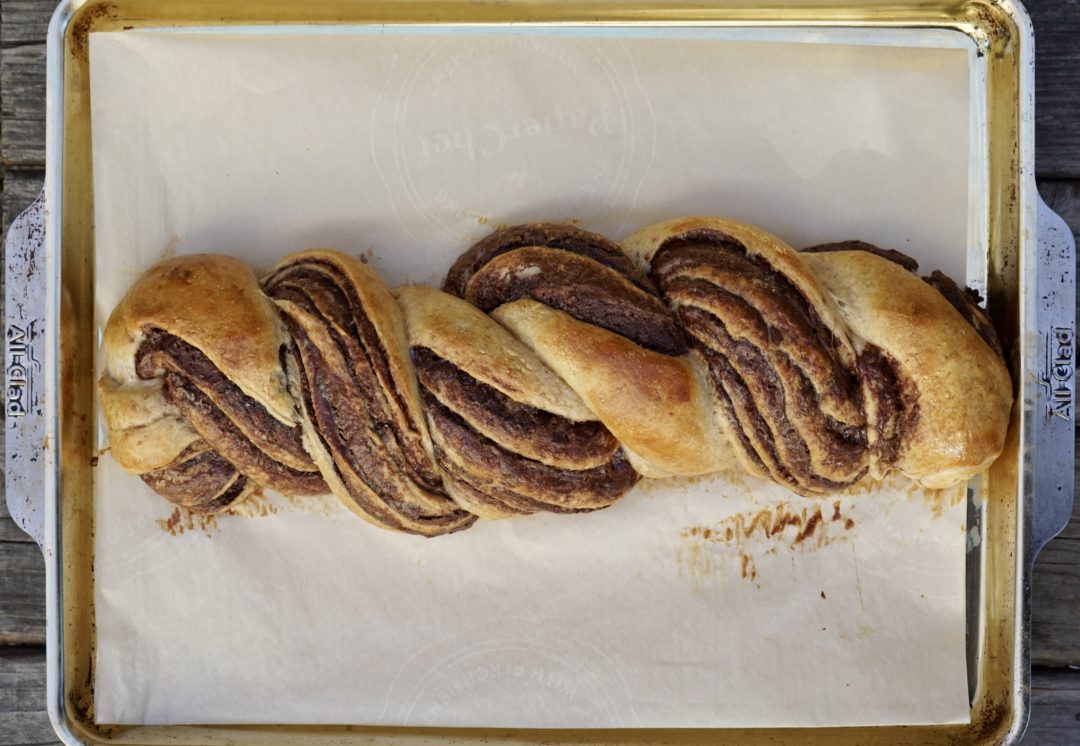 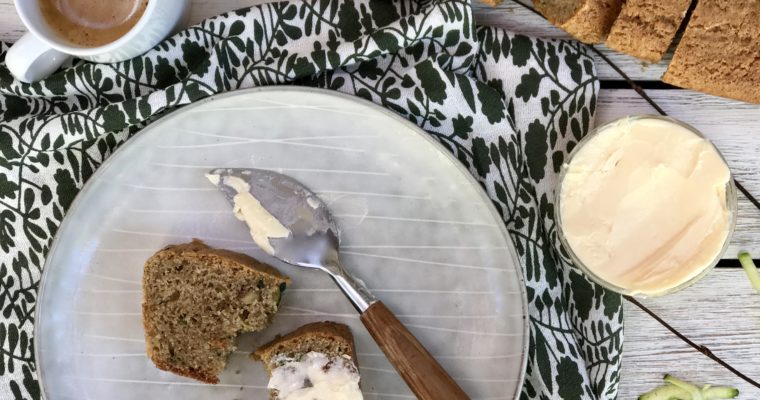 Zucchini Bread Almost Like My Grandmother Used To Make

My maternal grandmother was a fantastic baker.  She was a nurse by trade, but during her free time she often could be found baking something delicious. There were many things my grandmother made that I loved, but she hands-down made the best zucchini bread. Zucchini […]